An erect succulent shrub growing to 1 to 2m high.

Consist of a series of blue-green fleshy segments (also known as joints, pads or cladodes) which are commonly thought of as leaves but are really flattened stems.

Segments are circular growing, to 40cm in diameter  — flat, glabrous and armed with tufts of numerous barbed bristles (glochids). Commonly found with 1 to 5 sharp spines growing to 4cm long arising from each areole.

Small, scale-like, produced beneath the areoles on young segments only  — which are shed as segments when mature.

Yellow petals with reddish streaks on the back. Flowers are about 5 to 8cm in diameter, sessile, with a fleshy base, produced mostly on the upper margins of terminal segments. 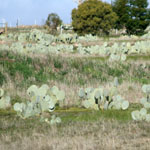 Pink to purple and barrel-shaped growing to 8cm long and 6cm in diameter, with dark red flesh bearing tufts of fine barbed hairs or bristles in areoles.

The root system of the wheel cactus is shallow and fibrous. 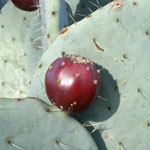 The weed produces viable seed, which can be spread in the droppings of birds, foxes and other animals over large distances. The plant reproduces by seed and also propagates from branch segments.

Wheel cactus prefers arid and semi-arid areas in warm temperate and sub-tropical regions, where it grows well on shallow granite soils. The plant is drought-resistant.

It has become weedy in isolated areas of Victoria, particularly in the north central region.

The icons on the following table represent the times of year for flowering, seeding, germination, the dormancy period of Wheel cactus and also the optimum time for treatment.

Wheel cactus is not usually grazed by stock because of its stout spines. In dense patches, the plant could hinder access to water and reduce food available for fauna.

Being long-lived, patches of the plant also provide effective and permanent harbour for pest animals such as rabbits.

Wheel cactus is not a weed of cropping or intense grazing land, however animals avoid the plant because of its spines and dense patches may limit grazing capacity. Presence of the weed is not likely to affect land value.

Patches of wheel cactus grow densely forming an impenetrable barrier, in some instances the plant was used as hedging. Where established, the weed is most likely to restrict human access.

The plant may also affect some recreational activities. The barbed bristles of the wheel cactus are sharp, readily penetrating human skin causing severe irritation and are difficult to remove.

Changes in land use practices and spread prevention may also support wheel cactus management after implementing the prescribed measures.