Restricted in the Mallee catchments 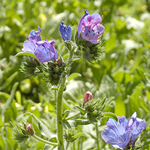 Paterson's curse is an annual, occasionally biennial, herb that grows as a rosette in autumn and winter and produces flowering stalks in spring and early summer. The rosette usually grows parallel to the ground, however the leaves may be erect in dense vegetation.

The stems of Paterson's curse are stout, erect and commonly 30 to 60cm tall, but often taller (rarely to 2m). They are light-green in colour and densely covered with coarse bristles. Stems branch mainly towards the top — often several stems emerge per plant. 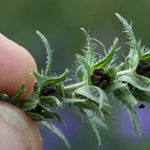 Paterson's curse leaves are green to light-green, alternate, thick and densely covered with soft or bristly hairs. Basal (rosette) leaves are up to 30cm long, are shortly stalked, elliptical-to-oval or paddle-shaped and conspicuously veined. These leaves die off as stem growth increases.

Stem leaves are smaller, strongly haired, stalkless, oblong-to-lance-shaped and heart-shaped at the base, almost clasping the stem.

The flowers of Paterson's curse are located in curved terminal clusters and are funnel-shaped. They are usually purple but may be blue, pink or, rarely, white.

The flowers have a calyx of 5 bristly, linear-to-lance-shaped sepals, are 8 to 11mm long, elongating to 15mm in the fruit. The petal tube may be 20 to 30mm long with 5 stamens, 2 of which are longer than the other 3 and protrude from the petal. 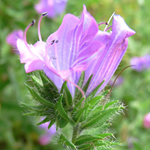 The seeds of Paterson's curse are dark brown to grey and tough, angular and beaked. They are up to 3mm long and 2mm wide, are three-sided, strongly wrinkled and pitted. 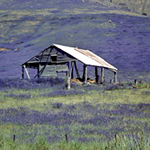 Plants can be found in all stages of growth throughout the year, however most of the population follows an annual cycle, with seeds germinating after the first autumn rains and rosettes increasing in size over winter.

Plants begin to produce flowering stalks in late winter, commence flowering in early spring and die in summer. The first mature seeds are produced 4 to 6 weeks after flowering starts. Seed can be spread by:

Livestock can carry seed in their digestive tract or directly on their coats.

Italian bugloss, Echium italicum, occurs in southern NSW and South Australia, near the Victorian border. It is similar to viper's bugloss but it is more densely hairy and has pale yellow or cream flowers.

Native to regions around the western Mediterranean, naturalised in Australia between 1850 and 1900.

Paterson's curse occurs mainly in degraded pastures, on roadsides and in disturbed sites, in warm temperate areas with Mediterranean-type or semi-arid winter rainfall climates. It does not grow well on alkaline or lime-rich soils.

Paterson's curse infestations have been found in numerous locations around the state, but particularly in the north central and north eastern regions.

The icons on the following table represent the times of year for flowering, seeding, germination.

Paterson's curse flowers from July to January and sets seed from August to March. Seeds germinate from March to May and plants die off from around December to February. As Paterson's curse is an annual, it completes its life cycle, from germination to the production of seed, in one year and then dies.

Paterson's curse can invade areas of natural vegetation, particularly where there is frequent disturbance, and can suppress smaller plants.

Paterson's curse is poisonous to grazing animals. The plant contains pyrrolizidine alkaloids which cause cumulative chronic liver damage, loss of condition and sometimes death. The alkaloid concentration of plants in the rosette stage is twice that of flowering plants. Pigs and horses are most susceptible. Ruminants (sheep, cattle and goats) are less affected because the alkaloids are largely broken down in the rumen. The plant is nevertheless extensively grazed in mixed pastures in southern Australia by sheep and cattle without drastic harmful effects, and is as nutritious as desirable pasture species. Mortality of sheep and cattle can be avoided by good livestock and pasture management.

The plant reduces pasture productivity by competing for light, moisture and nutrients with desired species.

When Paterson's curse displaces legumes in a pasture, nitrogen fixation is reduced and soil fertility declines unless fertiliser is applied.

In dairy areas, the stiff bristles on the plant irritate the udders of cows.In subterranean clover seed crops, Paterson's curse seeds are difficult to separate in the cleaning process, therefore reducing crop quality.