Prickly pear (drooping) is an erect succulent shrub which can grow to a height of 5m.

The stems of prickly pear (drooping) are commonly grey-green to light green. The plant usually has one main woody stem with dense prickles, which gives way to a number of side branches made up of fleshy segments. The segments are approximately 45cm long, 15cm wide and 1 to 2cm thick, with the upper segments appearing to droop.

Each plant segment has areoles, which are growing points where new segments, flowers or roots can be produced.

Each areole has short tuffs of finely barbed bristles and sometimes 1 to 5 sharp, 5cm long spines. Spines are more common on segments that are older and lower on the plant. 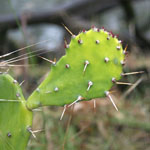 Leaves of prickly pear (drooping) are small and resemble scales, which are produced beneath the areoles. Leaves only occur on young segments and are shed during maturity.

Prickly pear (drooping) flowers consist of petaloids which are yellow and have red markings on the back.

Flowers are 6cm in diameter and have a fleshy base which matures into the fruit. Flowers are borne on the edges of the segments and are not known to develop until the plants are at least 3 years old.

Flowering occurs between spring and summer. 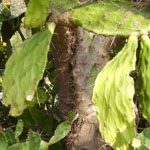 Fruit of prickly pear (drooping) have green to red skin with a red flesh. The fruit ranges from 4 to 7cm long and is roughly pear-shaped, bearing tufts of finely barbed bristles in the areoles.

The seeds develop small bristled segments and are capable of germinating at virtually any time of the year.

Prickly pear (drooping) reproduces by seed and branch segments (cladodes). The segments of the plant grow and develop additional segments, resulting in a mature plant.

Viable seed is spread in the droppings of birds, foxes and other animals. Dispersal can occur close to the parent plant when segments or fruit fall to the ground and develop roots.

Detached segments and fruit may be spread by flood waters or through human movement, such as waste disposal and replanting.

Roots are formed from one or more areoles on the surface in contact with the soil, and new segments are produced from some of the areoles on the upper surface. Segments and fruit are readily detached from the parent plants.

Prickly pear (drooping) is most active during summer and has a long lifespan, particularly when segments of the plant fall to the ground.

It will tolerate shaded and higher rainfall areas compared to many other prickly pear species. It is a common weed in pastures, waterways, roadsides, railways and coastal areas, often growing in sandy soils.

Prickly pear (drooping) has a scattered distribution in Victoria.

The icons on the following table represent the times of year for flowering, seeding, germination, the dormancy period of prickly pear (drooping) and also the optimum time for treatment.

Thick infestations of the prickly pear (drooping) may impede the growth and regeneration of native vegetation. It can provide harbour for pests, such as rabbits and foxes.

Thick infestations of prickly pear (drooping) can form a barrier that obstructs the movement of stock and will reduce agricultural productivity. The fruits have been known to host fruit fly.

Spines and barbs of the plant may damage mouths of grazing animals.

Spines and barbs of the plant may cause injury to humans.

Changes in land use practices and spread prevention may also support prickly pear (drooping) management after implementing the prescribed measures.