Regionally controlled in the Mallee and North Central catchments.

Restricted in the Wimmera, Goulburn Broken and North East catchments. St Barnaby's thistle has several branching, hairy, greyish stems rising from near the base of the rosette and growing to a height of 1m. Stems are winged and there is an absence of spines.

Juvenile leaves are club-shaped with toothed margins and long hairs on the upper surface. Adult leaves appear on the rosette and lower stems. These leaves grow to 20cm are deeply lobed and spear-shaped. They are greyish to blue-green in colour due to the downy hairs.

Flowers of St Barnaby's thistle are yellow, appearing solitary on the ends of branched stems and ovate in shape. They grow between 10 to 15mm long. Flower heads may grow between 4 to 15mm across and are encircled by rows of yellow spines that are 10 to 25mm long and protruding from the bracts.

Flowering occurs over a 4 to 5 month period beginning in late spring continuing throughout summer. 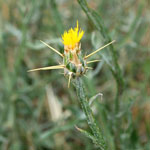 Inner seeds of St Barnaby's thistle are light fawn to grey, 2 to 3mm long with a circle of hairs (pappus) 5mm long. They constitute approximately 75 to 90 per cent of the total seed head.

Outer seeds of St Barnaby's thistle are dark brown and mottled, 3 to 4mm long and usually lack a pappus (if present, is reduced to only a few short bristly hairs). St Barnaby's thistle is spread by seed. Some of the plant's seed is equipped (inner flower head seeds) with wind dispersal mechanisms known as a pappus.

Undispersed seed (approximately 10 per cent) rely on the stem collapsing and depositing the seed on the adjacent ground. In addition to dispersal by water, seed is spread as a contaminant in fleece, grain and also on vehicles and machinery.

St Barnaby's thistle germinates after the autumn rains, developing into rosettes throughout winter and early spring.

Flower stems grow in late spring and over summer producing seeds over a 4 to 5 month period. Depending on climatic conditions, the St Barnaby's thistle may survive the late summer forming a new rosette in autumn followed by a second spring flowering. Early removal of the flowering stem via mowing may encourage a similar second year spring flowering.

St Barnaby's thistle produces between 35 to 80 seeds per flower head with up to 10,000 seeds produced per plant. Over 90 per cent of the seeds are viable once it is dispersed from the flower.

Seed longevity of this weed is between 6 to 10 years with most of the seeds either germinating or depleting in the first year. Approximately 10 per cent of the seeds survive to a second season.

It is important to note that 1 per cent of a substantial seedbank can constitute thousands of seeds and therefore thousands of potential plants.

St Barnaby's thistle prefers temperate regions on fertile, drier soils. It favours areas with 600mm of annual rainfall, but is also know to have a significant presence in lower rainfall areas.

This plant can be found on roadsides, neglected wasteland and agricultural land. Plants in the rosette phase are frost tolerant while mature plants entering the flowering stage become more frost sensitive. It prefers full sun and vigour is reduced as shade increases.

In Victoria, St Barnaby's thistle can be found in patchy infestations across the northern part of the state.

The icons on the following table represent the times of year for flowering, seeding, germination, the dormancy period of St Barnaby's thistle and also the optimum time for treatment.

St Barnaby's thistle competes with desirable species in crops and pastures. The large rosettes shade out other species and compete for nutrients. The weed can greatly deplete soil moisture.

The plants also produce allelopathic compounds that inhibit the growth of other species.

St Barnaby's thistle is not palatable to stock unless the plant is young. Large dense infestations can create barriers and restrict stock movement. Spines can cause injuries to stock particularly to the eyes, mouth and feet. Fleece contamination is also a problem.

The rosettes are toxic to horses and can cause a neurological disorder known as 'chewing disease'.

Changes in land use practices and spread prevention may also support St Barnaby's thistle management after implementing the prescribed measures.