Regionally prohibited in the North East and Glenelg Hopkins catchments. Golden thistle is an erect, perennial herb with many branches. It grows to 1m high.

Stems are erect, sometimes single but usually several stems are produced from a crown. Stems have many branches, are spiny winged and covered with fine down, containing milky sap. 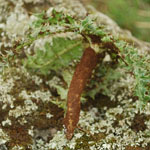 Golden thistle leaves have a variegated appearance due to light-coloured veins and markings, contain milky sap.

Stem leaves are rigid and deeply divided, with rigid spines. Leaf bases extend down the stem as spiny wings with upper leaves reflexed.

Rosette leaves grow to 30cm long and are less rigid and less spiny than adult plants.

Golden thistle has golden-yellow florets on solitary flower heads of 2.5 to 4cm in diameter. They develop on very short stalks in the leaf axils with each head surrounded by a few very stout, spiny bracts. Wind plays an important role in the dispersal of golden thistle, even though the seed is not equipped with a pappus of hairs.

The aerial growth of the plant breaks off at ground level and tumbles large distances before being caught against fences, trees or logs, raised or rocky outcrops, having shed seeds along the way. Aerial growth is also blown into streams or channels and transported by water.

Seeds can also be caught in wool and other agricultural produce. Some spread is possible by cultivation equipment dragging pieces of cut root to clean areas.

Golden thistle seed has about 70 per cent viability. The weed's large tap-root will produce new aerial growth each autumn.

The weed is drought tolerant.

In Victoria, it has become a weed of grazing land and neglected areas where annual rainfall exceeds 400mm.

The weed is found along the Loddon River and at a small number of locations in central and western Victoria.

The icons on the following table represent the times of year for flowering, seeding, germination, the dormancy period of Golden thistle and also the optimum time for treatment.

The stout spines of the golden thistle are present for much of the year and may injure animals.

Clumps of the weed can provide an effective harbour for vermin.

Animals will not graze on this plant where it grows in pasture.

Large infestations can displace or compete with smaller native species.

Grazing animals do not eat the aerial growth of the Golden Thistle due to the stout spines on the plant's rigid leaves. The spiny nature of the plant also discourages animals from grazing near it, leaving valuable pasture neglected.

Dense infestations of the weed become almost impenetrable and are likely to reduce carrying capacity. Until the plant is controlled, grazing areas may be of limited use. This may reduce the land value.

It can be controlled by cultivation, so a change in land use may assist control efforts.

The weed is found in vineyards and orchards but does not appear to impact on the quality of harvest.

Infestations of golden thistle are known to occur along riverbanks and dense infestations may restrict access to water-based recreational activities.

Humans would also have difficulty in walking through an infestation as the plant's spines could be a significant issue penetrating clothing and causing injury.The stems can remain on the plant after the aerial parts die off in autumn. Spines would be present for much of the year.

Changes in land use practices and spread prevention may also support golden thistle management after implementing the prescribed measures.