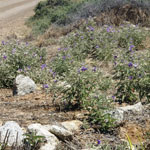 Silverleaf nightshade is an erect summer perennial herb growing to a height of 80cm.

Stems of silverleaf nightshade are erect with many branches and densely covered with fine star-shaped (stellate) hairs that give them a silver-white appearance. They also usually have numerous slender, yellow to red prickles 2 to 4mm long. Silvery white due to a dense covering of stellate hairs and denser on the under surface. Alternate, lanceolate to oblong, growing to 15cm long (usually about 6 to 10cm) and 1 to 2cm wide. Stalked, often with prickles on the underside of veins with undulating margins and often scalloped.

Silverleaf nightshade flowers are purple to violet or occasionally white and grow to 3.5cm in diameter. They consist of 5 fused petals with 5 yellow, long and tapering anthers. The fruit of silverleaf nightshade is a smooth globular berry.

They are green with dark striations when immature, yellow and orange mottled and becoming wrinkled and dry when ripe. Fruit are about 1.5cm in diameter with up to 60 fruits per plant. Silverleaf nightshade is spread by root pieces and seed. All parts of the root are capable of forming shoot buds.

Birds can disperse the plant's seed over distances greater than 1km.

The seeds of silverleaf nightshade have a long lifespan. Each plant bears 30 fruits with about 75 seeds in each fruit resulting in approximately 2250 seeds per plant.

Silverleaf nightshade prefers warm-temperate regions where it is not confined to any particular soil type. It grows well in areas with an annual rainfall of 250 to 600mm. The weed is also drought tolerant.

In Victoria, it is found mainly in areas with an average annual rainfall of 300 to 560mm and appears to favour light, textured soils. Larger infestations are found on wheat-growing lands and pastures, mostly in northern Victoria.

The icons on the following table represent the times of year for flowering, seeding, germination, the dormancy period of silverleaf nightshade and also the optimum time for treatment.

Silverleaf nightshade is primarily a weed of agriculture and cropping. The weed's extensive root system enables the plant to draw moisture and nutrients from a large volume of soil and compete effectively against other species.

Although it infests broad areas, the infestations tend to be populated as discrete patches. Infestation is aided by cultivation.

Silverleaf nightshade is a direct competitor to summer growing crops and pastures. The plant reduces the production of winter crops, such as cereals, because of the depletion of nutrients and moisture. The weed does not severely affect orchards or vineyards but competes with cover crops grown in these situations.

The plant's spiny leaves and coarse stems may lower the quality of hay taken from infested areas, resulting in contaminated product that may be rejected for sale. All parts of the plant's fruit, especially when the fruit is either green or ripe, are toxic to animals.

Silverleaf nightshade is one of the most difficult weeds to kill. The value of land infested with this plant is reduced, due to the weed's persistence and its potential impact on agricultural production.

The weed also has allelopathic effects, which have been demonstrated in cotton.

Being a fairly small plant, silverleaf nightshade will generally not restrict human access. The weed has a prickly stem that may affect some recreational activities. Dense patches of the plant may create a negative visual impact.

Changes in land use practices and spread prevention may also support silverleaf nightshade management after implementing the prescribed measures.