A study was conducted to establish a baseline picture of what mouth pathology could be expected during a routine inspection.

The Foot and Mouth Disease (FMD) outbreak in the United Kingdom (UK) during 2001 highlighted the difficulties in relying on visual examination of the mouths of sheep for FMD surveillance inspections. The UK experience was that there was a significant variety of normal mouth pathology in sheep that was not due to FMD.

In general, farmers and vets are not familiar with the normal range of oral lesions found in sheep.

Survey of routine inspections across Victoria

Our animal health staff inspected a number of flocks at a variety of locations throughout Victoria in each of the four seasons over a 12-month period.

Photographs of the more commonly seen lesions along with information relevant to the lesion's likely cause were collected and collated.

The main outcome of the survey was a pictorial guide depicting the most commonly seen lesions along with the conditions with which they were associated. The lesion types seen included:

A sample of some of the lesions seen is shown below. Healing ulcer on the lower gum of a two-year-old merino ewe on spring pasture with drying barley grass on a property near Bairnsdale, East Gippsland. Two nodules on the lower lip of a four-year-old merino wether on spring pasture on a property near Ararat. Ulcer and abscess on the upper lip of a full-mouth merino wether on autumn pasture on a property near Ararat. 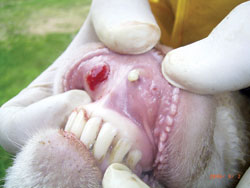 Healing lesion on the upper lip of a full-mouth merino wether on spring pasture on a property near Yarck, North Eastern Victoria 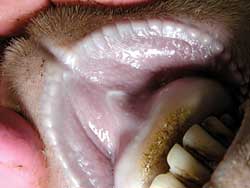