Leaves of Devil's claw (yellow flower) are round to heart-shaped, 5 to 25cm across, opposite and covered with glandular hairs as on the stems. Stalks grow to 20cm long.

Devil's claw (yellow flower) has yellow flowers with red or purple markings. They are trumpet-shaped, 2.5 to 5cm long and 5 to 7.5cm in diameter.

The fruit of devil's claw (yellow flower) is a bulbous capsule containing numerous seeds, armed with a long curved beak which splits as the fruit matures to form two hard curved claws.

The mature fruit is 10 to 25cm long, generally light brown and with short spines at the base, which are apparent when the outer husk is peeled off.

The claws are longer than the body of the capsule. 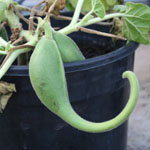 Devil's claw (yellow-flower) reproduces by seed and is dispersed only by the movement of seeds, usually while still within the fruit.

With its hooked claws, the fruit readily attaches to almost anything which it has contact with, and is likely to spread over distances of 200m.

The weed has a bulbous capsule containing numerous seeds. Each plant bears 10 flowers which contain 100 seeds per capsule, resulting in 1000 seeds per plant.

Devil's claw (yellow flower) is an annual and only produces propagules once a year.

It occurs as an isolated plant and can be found in small patches on roadsides, river flats, neglected areas, and occasionally on cultivated fallows and in annual pastures.

The icons on the following table represent the times of year for flowering, seeding, germination, the dormancy period of Devil's claw (yellow flower) and also the optimum time for treatment.

Small patches of isolated devil's claw have the potential to compete with and replace more desirable species. There is a marked seasonal variation in the weed's population size and density.

Devil's claw (yellow flower) is known to compete strongly with summer crops. Presence of the plant has minimal impact on yield.

Its fruit can injure stock when lodged in the mouth, potentially leading to death by starvation. It can also cause physical damage when the claws work into the animal's body or become attached to the feet.

This weed can also cause possible damage to sheep carcasses with the potential for major impact on the quality of the meat.

Devil's claw exudes slimy, sticky sap through its stems and the unpleasant odour produced by the secretions on the leaves would make it unpleasant to walk through an infestation. The weed poses no toxic properties to humans.