Read more about the classification of invasive plants in Victoria. Stems of star thistle are whitish to pale green with many branches, giving it a bushy appearance. They are very sparsely haired or covered with fine down and are lacking wings or spines.

Star thistle leaves are darkish green, have short hairs and are deeply lobed and sometimes toothed but without spines.

Rosette leaves grow to 25cm long and with stalks where stem leaves are much smaller, lanceolate (shaped like a lance) and grow directly from the base of stems rather than having stalks (sessile). Star thistle has flowers consisting of purple florets, rarely pink or white. There are numerous heads occurring singly at the ends of branches or in the axils of upper leaves.

Flowers are sessile or almost so and surrounded by numerous bracts each ending in a rigid, sharp, white or yellowish spine 1.5 to 3cm long and at the base of which are 2 to 6 shorter spines. (A sterile flower head forms at the centre of the rosette before the flowering stems develop.) 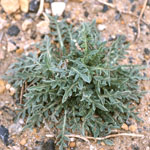 Star thistle lacks long-distance dispersal mechanisms as it doesn't have a pappus. The plant can spread to some extent by water along channels and by contaminating agricultural produce and equipment.

Seeds of star thistle tend to remain in the spiny heads that become attached to wool, bags and tyres. The plant breaks off at ground level and sheds seeds when blown as tumbleweed.

Star thistle has numerous flower heads. It can produce up to 50 flowering heads with 20 flowers a head and one seed per flower, resulting in 1000 seeds a plant. The seed is relatively short-lived surviving for only 2 to 3 years in the soil.

Star thistle prefers temperate regions in open, unshaded areas. It is a weed of roadsides, stock yards, undeveloped areas and poorer pastures, in areas with 700 to 900mm annual rainfall.

In Victoria, Star thistle can be found in the Wimmera and southern Mallee.

The icons on the following table represent the times of year for flowering, seeding, germination, the dormancy period of Star thistle and also the optimum time for treatment.

Star thistle is found mainly on roadsides, channel banks and neglected areas. It has minimal impact on fauna although spines from the weed have the potential to injure both fauna and livestock. In natural ecosystems, Star thistle can have a minor effect on ground cover and grasses.

Star thistle competes with desirable species in crops and pastures. The large rosettes shade out other species and compete for nutrients. The weed can greatly deplete soil moisture. The plants also produce allelopathic compounds which inhibit the growth of other species.

Star thistle is not palatable to stock unless the plant is young. Large dense infestations can create barriers and restrict stock movement. Spines can cause injuries to stock particularly to the eyes, mouth and feet. Fleece contamination is also a problem. The rosettes are toxic to horses and can cause a neurological disorder known as 'Chewing Disease'.

The spiny nature of Star thistle may restrict some recreational activities and has the potential to injure humans. The weed's spiny heads are present for much of the year.

Changes in land use practices and spread prevention may also support Star thistle management after implementing the prescribed measures.