This is the Indian Ocean Dipole, also known as Indy. He influences Victoria's rainfall in winter and spring.

Indy brings rain to Victoria when the north-eastern Indian Ocean increases the amount of moisture it provides to the atmosphere. This moist air is herded across Australia and can deliver significant rainfall into Victoria.

When the north-eastern Indian Ocean produces less atmospheric moisture, Indy doesn't drive as much rain towards Victoria, and we can end up with a drier winter and spring.

Historically, Indy has been a significant source of rain.

However, in recent years Indy has not been chasing moisture down south as often as farmers would like, reducing the average rainfall for Victoria.

Indy is closely watched by scientists who make limited predictions on his behaviour before winter and spring arrive. Keeping an eye on Indy's behaviour can provide an indication on the expected rainfall coming from the north-west to Victoria.

Key things to know about the Indian Ocean Dipole (IOD) This occurs when the Indian Ocean is warmer in the west (near the coast of Kenya) than it is in the east (near Sumatra). This reduces tropical moisture availability for Victoria, and can make for a drier spring. 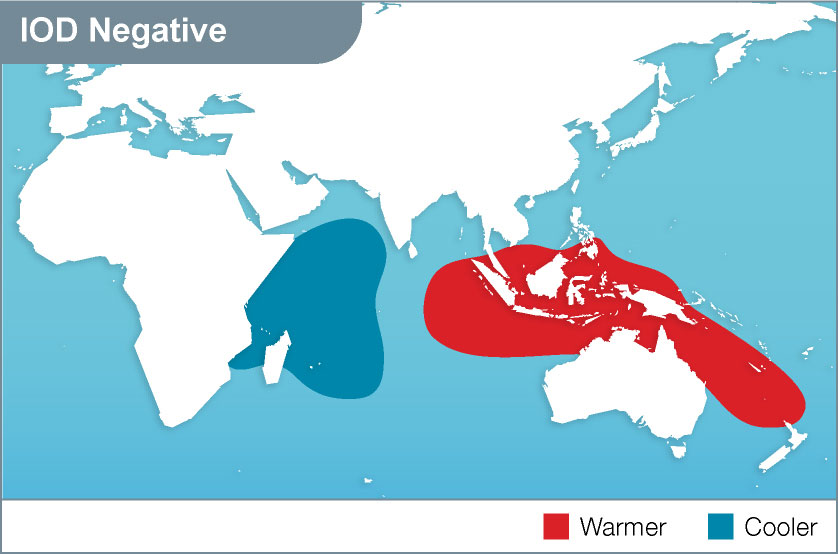 When the Indian Ocean is warmer in the east than it is in the west we have an IOD negative event. This means that more moisture is available closer to Australia, and can be delivered to Victoria through northwest cloud bands. Typically IOD negative events have been associated with wetter seasons in Victoria.

Where to go for more information