Sam herds cold fronts up from the Southern Ocean, a significant source of rain for southern Victoria.

If we take a look at the southern ocean we can see westerly winds circling around Antarctica throwing out cold fronts of stormy wet weather.

The strength and position of these winds is known as the Southern Annular Mode or Sam.

Sam is an unreliable climate dog often changing his behaviour in a matter of weeks which can affect Victoria's rainfall.

When Sam is tied up strong winds are pulled in towards Antarctica and there is a reduction in the number and strength of cold fronts that reach southern Australia.

When Sam is let of the leash, the westerly winds move further north increasing the chance of frontal activity and potential rainfall.

Over recent decades Sam has found himself tied up more often resulting in less cold fronts and rainfall for some parts Victoria.

Sam's behaviour is complicated so scientists are in full swing to try to understand how this climate dog may impact on Victoria's weather down the track.

Key things to know about the Southern Annular Mode (SAM) 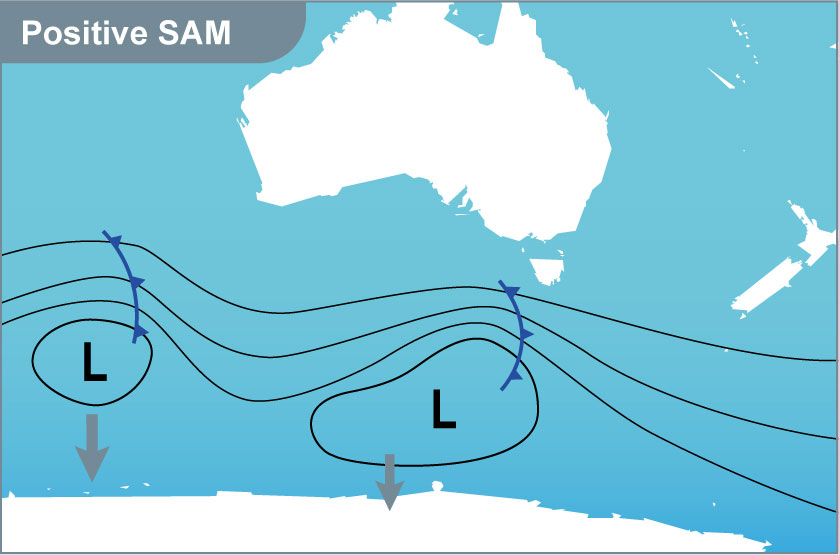 When the belt of westerly winds contracts around Antarctica less (or weaker) rain producing fronts move across southern Australia. This is called the positive SAM phase and decreases the chance of rainfall (from fronts) during winter. When the westerly wind belt expands, more (or stronger) fronts can come closer to southern Australia. Negative SAM increases the likelihood of above average winter rainfall in southern Victoria.

Where to go for more information