Canola is a profitable cropping option for many cropping regions of Victoria and it also brings diversity in terms of cropping rotations. 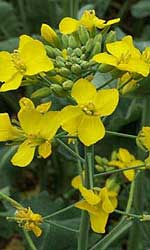 Vivid yellow flowers in spring make canola the most distinctive of Victoria's winter crops. Walk close to a canola crop in flower and the strong cabbage smell explains its origin as a member of the Brassicaceae family, which includes:

Canola is a variant of the ancient crop rapeseed, a word derived from the Latin rapum meaning turnip. Fodder rape is a related plant sown in southern Victoria for grazing by sheep.

Canola is grown for its seed, which is crushed for the oil. The oil is used for industrial purposes like biodiesel and food uses including:

The properties of the oil fits with the view that human health is better served by increasing the intake of mono and polyunsaturated fats in place of saturated fats.

After the oil is extracted, the by-product is a protein-rich meal used by the intensive livestock industries. In dry seasons, canola can also be cut for hay. When cut on time and managed well, canola can produce a high quality hay.

Canola fits well into a crop rotation on grain and sheep farms in the 450mm to 700mm rainfall zones. Earlier maturing varieties and farming practices allow canola to be grown in much drier environments, such as the Mallee.

For a grain farmer, the essentials of growing wheat or canola are the same. The crop is usually sown in late autumn or early winter into moist soil. In the high rainfall zones it can be sown as late as early spring if necessary. In seasons with a late autumn break or if the autumn break is forecast in the near future, the crop is sometimes sown into dry soil and germinates after opening rains.

Canola needs nitrogen and phosphorus fertiliser. Other nutrients such as sulphur are also important. Often large amounts of nitrogen are required depending on whether it is a first crop after clover or medic pasture (less nitrogen needed) or grown following other grain crops (usually more nitrogen needed). Nitrogen can be applied before sowing, drilled with the seed or top dressed in late winter or early spring.

In areas with less than 450mm annual rainfall, many farmers are now opting to only use some starter fertiliser, such as MAP or DAP drilled with the seed, and topdress the crop with urea later, before the stem elongation stage. The rate applied depends on the yield the farmer is targeting, and this depends mostly on the amount of rainfall the crop is likely to receive during the growing season and the date that it is sown. The rule of thumb is that canola needs about 80kg per hectare of nitrogen for every tonne of grain expected to be produced.

Early weed control must be effective.

Once established, canola is effective at crowding out weeds.

Some special varieties of canola have tolerance to herbicides that will kill conventional varieties, and can survive being sprayed with that herbicide while many weed species are controlled or suppressed. These include triazine tolerant, Clearfield, Roundup Ready(R) and TruFlex(R) types, as well as varieties with more than one type of herbicide tolerance. They also allow growers to sow canola earlier into dry soil rather than wait for the autumn break and emergence of weeds. (Canola crops that emerge earlier tend to produce higher yields and higher oil content.)

Canola can be affected by a number of insect pests, which may require chemical control if they start to cause significant crop damage.

Adoption of an integrated pest management (IPM) system reduces, but does not eliminate, the use of insecticides by allowing the build up of beneficial insects that may keep populations of pest insects in check.

At the seedling stage, canola crops are vulnerable to redlegged earth mite and a number of similar or related pests such as blue oat mite and lucerne flea. Chemical mite control is often necessary and one option is to apply an insecticide seed dressing.

In areas such as south west Victoria, skylarks and slugs can also cause damage to emerging canola crops. Other possible pests during the growing period include aphids and a range of insect species as well as mice.

Two major differences exist between canola and most other crops which affect crop management. The first is seed size.

Canola is a tiny seed, which means that sowing depth must be well controlled. Alternate wetting and drying of the seed at the soil surface can cause patchy germination. The seed is best sown shallow, but still covered by a thin layer of soil to protect it from drying out before or after germination. Many farmers use devices called press wheels, which follow the sowing tyne and press the soil over the seed to give it better contact with the soil so it does not dry out quickly. Press wheels are very beneficial in improving the establishment of canola crops.

The second difference is the need to windrow the crop to minimise seed loss. A ripe standing crop of canola is vulnerable to wind damage. Swaying stems bring the brittle pods in contact with each other, which causes shattering and seed loss.

Windrowing (or swathing) involves cutting the crop 8 to 10 days before the seed is fully mature. The window of opportunity for ideal timing of windrowing that avoids shattering losses or reduced grain yield and oil content is only 3 to 4 days. The crop should be windrowed when 40 to 60% of the seeds have changed from green to brown-black and are firm enough to roll between the fingers without squashing. The windrow lies in horizontal bundles 10cm to 20cm off the ground supported on the cut stems. Ripening of the pods and seeds continues with less risk of movement caused by strong winds. When judged to be ripe, and at maximum 9% moisture, the windrow is picked up by the harvester.

Windrowing is a specialised operation that adds to the cost of production. There are many contractors who specialise in windrowing, but more and more growers with large areas of canola crops are opting to purchase their own machines in order to exercise better control over the timing of windrowing. Picking up the windrow may involve fitting a special front to the harvester. Again, many farmers are prepared to invest in this, while others prefer to use contractors to windrow and harvest.

Australia produces 1.9 to 2.7 million tonnes of canola grain each year.

There are also small quantities of minor oilseeds such as safflower and linseed grown in Australia.

In Victoria the main canola production area is the south west but the crop is important across the grain belt. The release of earlier maturing cultivars has extended canola's range into the Mallee.

The area sown to canola depends on demand and prices in relation to other crop choices and factors such as the timing of the autumn break and the amount of moisture stored in the subsoil in low and medium rainfall zones. 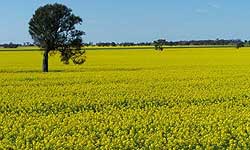 Between 2017/18 and 2019/20, Victoria was the second-highest canola producing state after Western Australia due to extremely dry conditions in New South Wales. However, in most years, the rank order of production states is:

While Australia is a relatively small producer of oilseeds by international standards, it is widely regarded for its high-quality exports and has developed some significant international markets for its canola and cottonseed exports. Currently, the EU, Japan, China, Pakistan and the UAE are important markets for Australian canola. In 2019/20, most Australian canola was exported to the EU for biodiesel.

The marketing of canola is well organised. A number of buying organisations offer farmers the option of taking fixed price contracts during the season. The farmer nominates the tonnage that they will deliver for each contract written.

Alternatively, a farmer can choose not to make an early decision and instead sell after harvest, perhaps warehousing the seed while deciding how long to wait and who to sell to. There are minor variations on these options.

Canola is an excellent choice to enhance or extend a crop rotation. It produces a high yield and can be a profitable crop in its own right, as well as an excellent fit with cereals or pulses.

The average yield of canola across Victoria between 2009/10 and 2019/20 was 1.66 t/ha, which includes two drought years. Yields of more than 4 t/ha are achieved by some farmers in better years, especially in higher rainfall regions such as south west Victoria and sometimes under irrigation.

Cereal yields after canola are often enhanced because of the disease cleaning that occurs when an unrelated crop type such as canola is alternated with cereals and kept free of grassy weeds.

Wheat yields improve by an average 20 per cent after grass-free canola or legume crops.

Canola in the rotation allows farmers to better manage their weeds. Because canola is a broadleaf crop, and because there are different herbicide tolerant varieties of canola, farmers have more options for weed control than in cereal crops such as wheat and barley.

A realistic target yield can be determined by calculating potential yields based on the amount of growing season rainfall expected, subsoil moisture available to the crop at sowing time and the sowing date. The target yield is 85% of the calculated potential yield.

For example, a canola crop sown in mid May in a location that received 285mm average growing season rainfall, with no stored subsoil moisture, can expect a potential yield of 2.66 t/ha. The target yield is 2.5 t/ha.

In recent years, below average rainfall has meant that some farmers have become better prepared for dry seasons and have tried, where possible, to reduce costs of crop sowing inputs. They spend more on the crop at later growth stages when they have a better idea of how the season is progressing.

Nitrogen fertiliser is the single biggest cost to canola growers. By applying most of the nitrogen fertiliser later in the season, but before stem elongation, rather than all before sowing, farmers can reduce some of the financial risk of growing canola.

These figures contain challengeable assumptions as grain prices vary during the year, different farmers have different costs and yield can vary. Also, the yield benefit of break crops like canola to subsequent cereal crops is not factored into the break crops gross margin.