The lucerne flea, Sminthurus viridis (Collembola: Sminthuridae), is a springtail that's found in both the northern and southern hemispheres but is restricted to areas that have a Mediterranean-type climate.

It's thought to have been introduced to Australia from Europe and has since become a significant agricultural pest of broad-acre crops and pastures across southern Australia. It's not related to the fleas which attack animals and humans. The adult lucerne flea is approximately 3 mm long with light green-yellow colouring and an irregular pattern of darker patches over the body (Figure 1). Lucerne fleas are wingless, have globular abdomens and can jump large distances relative to their size. Their mottled colouration, small size and elusive habits can often make detection difficult.

Eggs, which are laid in batches, are covered in a soil layer making them almost impossible to detect in the field. The eggs are yellow-cream and about 0.3 mm in diameter. The newly hatched nymphs are approximately 0.5–0.75 mm long and are pale yellow in colour. As they grow they resemble adults, but are much smaller in size and will moult several times before reaching maturity.

Lucerne fleas have a characteristic ability to 'spring' off vegetation when disturbed. This is due to a stiff appendage folded under their abdomen called a furcula, which is unfolded with such speed and force that it launches the lucerne flea into the air. 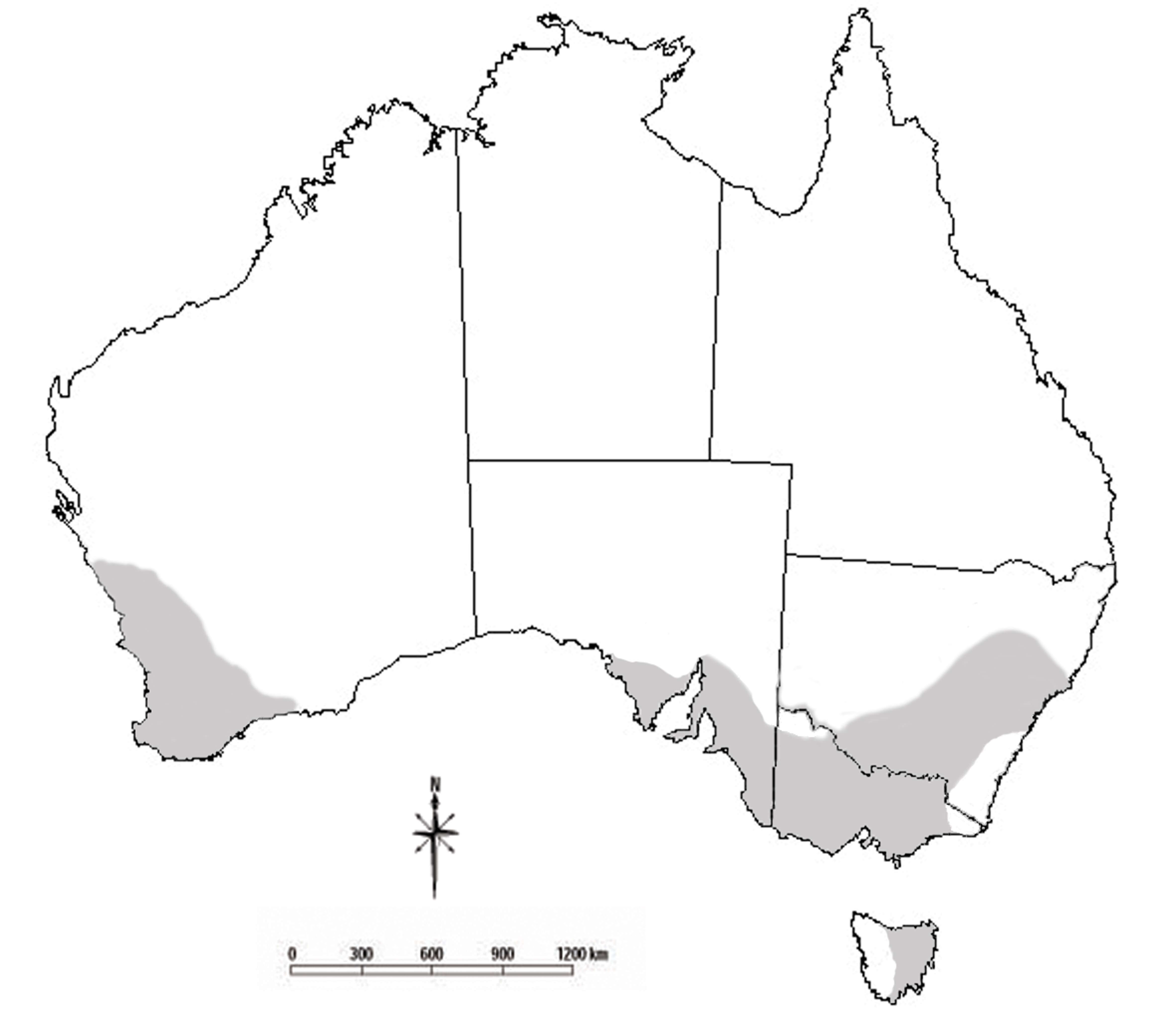 Lucerne fleas are common pests found in New South Wales, Victoria, Tasmania, South Australia and Western Australia (Figure 2). Larger numbers are generally found in the higher winter rainfall areas of southern Australia, including Tasmania, or in irrigation areas where moisture is high. They tend to be more problematic on loam/clay soils. Lucerne flea are often patchily distributed within paddocks and across regions.

Genetic analysis of populations suggests lucerne fleas have only limited movement between regions. It is likely that both adults and eggs are spread to new areas through the transport of hay and soil. Movement may also occur during summer from over-summering eggs being transported by wind.

The lucerne flea has a similar seasonal biology to other important pests of establishing crops, such as the redlegged earth mite. Lucerne fleas generally hatch from over-summering eggs in March–April following soaking autumn rains. They reproduce sexually and, depending on favourable temperatures and moisture availability, may go through as many as six generations per year. Each generation takes three to five weeks, with each female capable of laying up to three batches of eggs during this time.

Winter eggs are laid in moist crevices on the soil surface in batches of about 20–60, usually under vegetation and debris. Females then excrete a fluid substance containing ingested soil and glandular secretions over the eggs. This acts to both camouflage and protect the eggs.

At the onset of warmer and drier conditions, over-summering eggs are produced which are protected from desiccation by a clay cement layer excreted by females. Consequently, lucerne fleas are more common on heavier loam/clay soils and are rarely found on sandy soils. The protective coating also prevents eggs from hatching when rain is insufficient for lucerne flea development or for the establishment of host plants.

Lucerne flea are pests of all broad-acre grain crops and pastures, but broadleaf plants such as clovers and lucerne are particularly susceptible to attack (Figure 3). They can cause considerable damage to canola, field peas, lupins, faba beans, ryegrass, wheat and barley. Lucerne flea also feed on weeds including shepherd’s purse, chickweed, common sow thistle and wild radish, with capeweed being a favoured host.

Crops and pastures are most susceptible at plant emergence. Lucerne fleas move up plants from ground level, eating tissue from the underside of foliage. They consume the succulent green cells of leaves through a rasping process, avoiding the more fibrous veins and leaving behind a layer of leaf membrane. This makes the characteristic small, clean holes in leaves which can appear as numerous small ‘windows’ (Figure 4). In severe infestations this damage can stunt or kill plant seedlings. 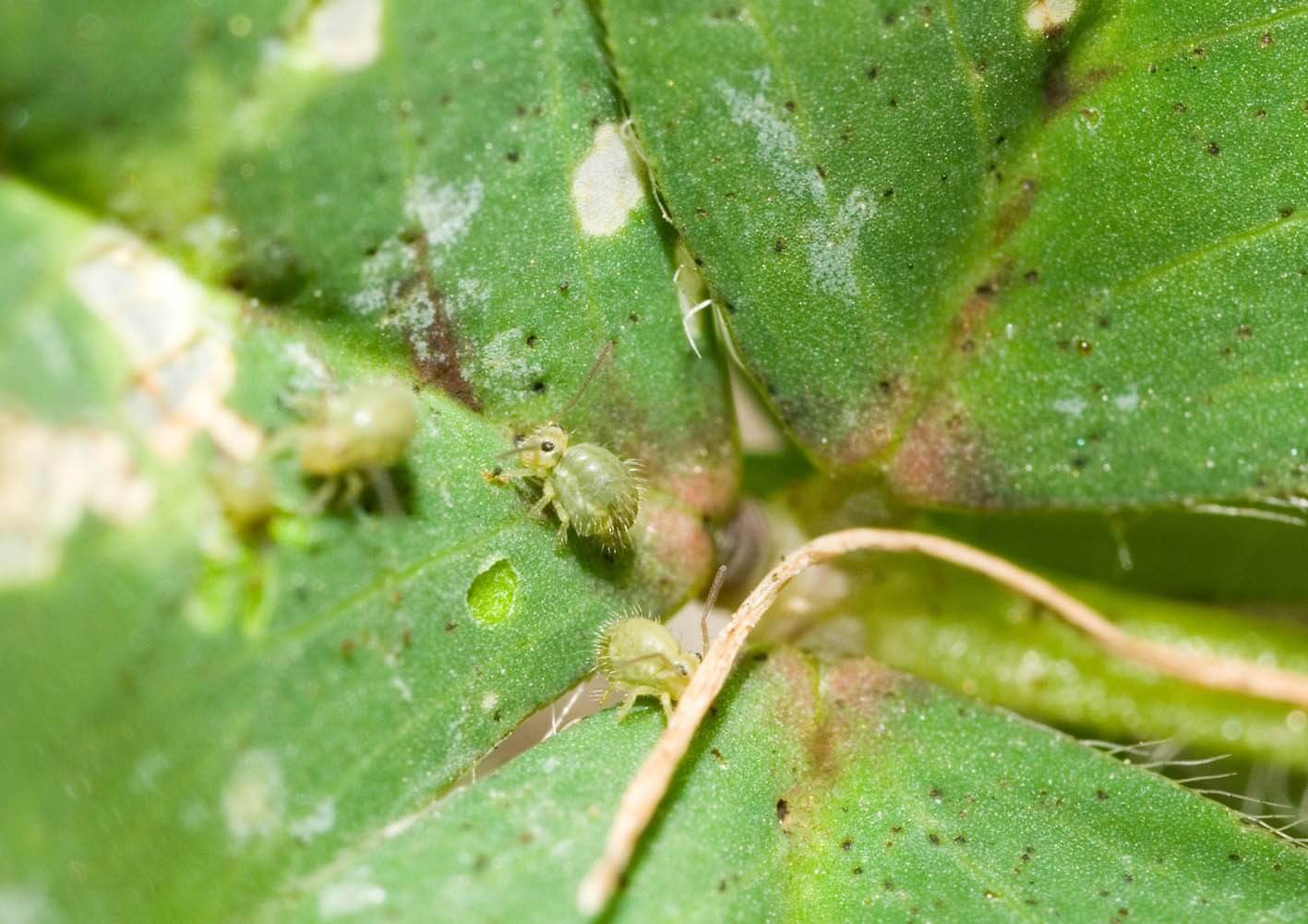 It is important to frequently inspect winter crops, particularly canola and pulses, in the first three to five weeks after sowing, when plants are most susceptible to damage. Pastures should be monitored fortnightly from autumn to spring, and more often in paddocks with previous lucerne flea problems.

Lucerne fleas are often concentrated in localised patches, so it is important to have a good spread of monitoring sites within each paddock. Examine foliage for characteristic lucerne flea damage and check the soil surface where insects may be sheltering. Damage levels can be used to determine whether or not spraying is necessary. Spraying immature lucerne fleas before they have a chance to reproduce can effectively reduce the size of subsequent generations.

Another effective way to monitor lucerne flea is using a standard petrol-powered garden blower/vacuum machine. Place a fine sieve or stocking over the end of the suction pipe to trap the lucerne flea vacuumed from plants and the soil surface. Inspect the contents by placing onto a tray.

Lucerne fleas compete for food and resources with other agricultural pests such as redlegged earth mites and blue oat mites. This means control strategies that only target one species may not reduce the overall pest pressure because other pests can fill the gap. It is therefore important to assess the complex of pests before deciding on the most appropriate control strategy.

If the damage warrants control, treat the infested area with a registered insecticide approximately three weeks after lucerne flea first emerge in autumn. This enables the further hatching of nymphs from over-summering eggs but will be prior to lucerne fleas reaching maturity and laying winter eggs.

In paddocks where damage is likely, a border spray may be sufficient to prevent movement of lucerne flea into the crop from neighbouring pastures or crops. Lucerne fleas are often patchily distributed with paddocks, so spot spraying, rather than blanket spraying, is typically all that is required.

Crops are most likely to suffer damage where they follow a weedy crop or a pasture in which lucerne flea has not been controlled. As such, lucerne flea control in the season prior to the sowing of susceptible crops can be effective.

Lucerne fleas have a high natural tolerance to synthetic pyrethroids and should not be treated with insecticides from this chemical class. When both lucerne fleas and redlegged earth mites are present, it is recommended that control strategies consider both pests, and a product registered for both is used at the highest label rate to ensure effective control.

Information on currently registered and or permitted chemicals can be found on the Australian Pesticide and Veterinary Medicine Authority (APVMA) website. Always consult the label and Safety Data Sheet before using any chemical product.

Several predatory mites, various ground beetles and spiders prey upon lucerne fleas. The pasture snout mite (Bdellodes lapidaria) and the spiny snout mite (Neomulgus capillatus), which have been the main focus of biological control efforts against lucerne flea, are very effective predators, particularly in pastures where they can prevent pest outbreaks (Figure 5). The complexity of beneficial species should be assessed before deciding on control options. Grazing management can reduce lucerne flea populations to below damaging thresholds. This reduces the height of the pasture, which lowers the relative humidity and limits food resources, and increases lucerne flea mortality.

Controlling broad-leaf weeds (e.g. capeweed) removes alternative food sources that would otherwise assist in population build up. In pastures, avoid clover varieties that are susceptible to lucerne flea damage, and avoid planting susceptible crops such as canola and lucerne into paddocks with a history of lucerne flea damage.

Grasses are less favourable to the lucerne flea and as such can be useful for crop borders and pastures.