BOM were introduced from Europe and first recorded in New South Wales in 1921. Management of these mites in Australia has been complicated by the discovery of three distinct pest species of BOM, whereas earlier research had assumed just a single species. The three recognised pest species of BOM are morphologically very similar. Adult BOM are 1mm in length and approximately 0.7mm to 0.8mm wide, with 8 red-orange coloured legs. They have a blue-black coloured body with a characteristic red mark on their back (Figure 1).

On hatching, BOM are pink-orange in colour, soon becoming brownish and then green, before reaching the adult stage. Larvae are approximately 0.3mm long, are oval in shape and have 6 legs.

Confusion with redlegged earth mite and other mite pests

BOM are often misidentified as redlegged earth mites in the field, which has meant that the damage caused by BOM has been under-represented.

Despite having a similar appearance, redlegged earth mites and BOM can be readily distinguished from each other. Redlegged earth mites have a completely black-coloured body and tend to feed in larger groups of up to 30 individuals. BOM have a blue-black body, a red mark on their back and are usually found singularly or in very small groups.

BOM can also be confused with other earth mite pests such as Balaustium mites and Bryobia mites.

The distribution of BOM is likely to be limited by the environmental conditions needed to successfully enter and complete the over-summering phase (known as diapause), as well as conditions needed for emergence to coincide with the growth of winter pastures and crops.

BOM are widespread throughout most agricultural regions of Australia with a Mediterranean-type climate (Figure 2). BOM are one of the most important pest mites in cropping and pastoral areas of:

They are also a pest in: 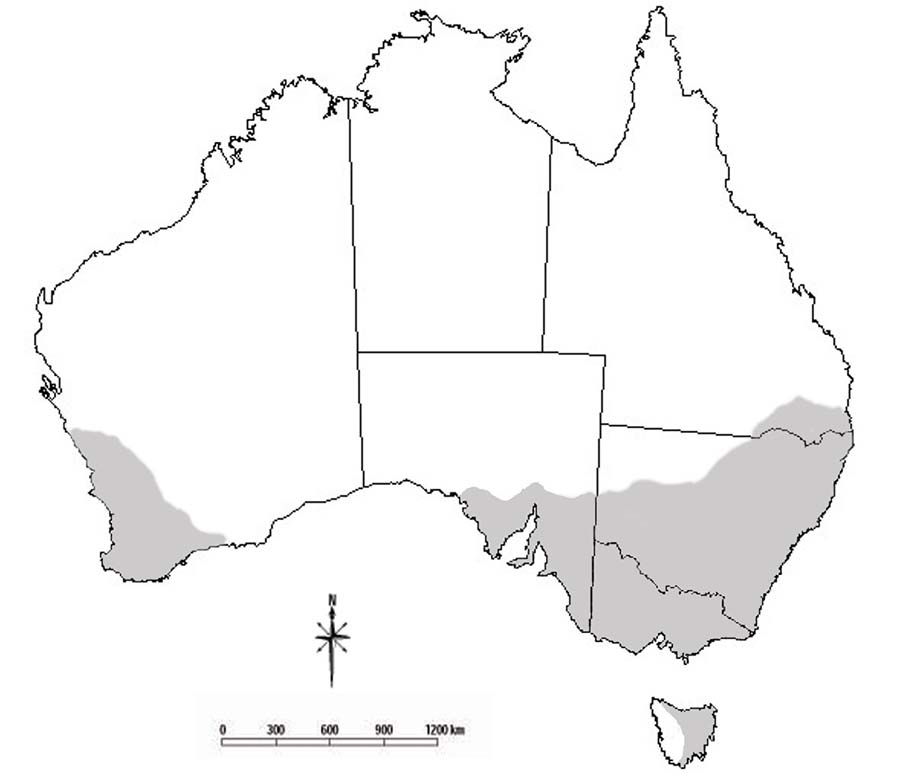 Distinguishing between the BOM species in the field is very difficult because a microscope is needed to see the morphological traits that separate each species. The main difference between species is the length and number of setae (bristle or hair-like structures) on the back of the mite.

BOM are active in the cool, wet part of the year, usually between April and late October. During this time they pass through 2 or 3 generations, with each generation lasting 8 to 10 weeks.

They spend the remaining months protected as 'diapause' or over-summering eggs that are resistant to the heat and desiccation of summer. These hatch in autumn after cool temperatures and adequate rainfall, when conditions are optimal for mite survival. Swarms of mites may then attack emerging crop and pasture seedlings.

Female mites deposit eggs either singly or in clusters of 3 to 6 on the leaves, stems and roots of food plants or on the soil surface. Those on the leaves are usually fastened by a slimy substance that is secreted next to and on the stem of plants.

Unlike many agricultural pests in Australia, BOM reproduce asexually. This mode of reproduction results in populations made up of female 'clones' that can respond differently to environmental and chemical conditions.

During winter, individual adult BOM move between plants over distances of several metres. Long range dispersal is thought to occur via movement of eggs carried on soil stuck to livestock and farm machinery, and through the transportation of plant material. Movement also occurs during summer when diapause eggs are blown by winds.

Having 3 pest species of BOM in Australia complicates control. These species differ in their distribution, pesticide tolerance and crop plant preferences. Despite these differences, all BOM species are typically treated identically in terms of control. This is a concern as management strategies against one species will not be as effective against another. Eradication of one species may result in another BOM species becoming more abundant.

BOM spend the majority of their time on the soil surface, rather than on the foliage of plants. They are most active during the cooler parts of the day, tending to feed in the mornings and in cloudy weather. They seek protection during the warmer part of the day on moist soil surfaces or under foliage, and may even dig into the soil under extreme conditions.

There are differences in the plant types attacked by the three BOM species:

These preferences can be used as an indication of the species present in a particular paddock, but confirmation by an expert is recommended.

Typical mite damage appears as 'silvering' or 'whitening' of the attacked foliage (Figure 4). Distortion, or shrivelling can occur in severe infestations. Mites use adapted mouthparts to lacerate the leaf tissue of plants and suck up the discharged sap.

Young mites prefer to feed on the sheath leaves or tender shoots near the soil surface, while adults feed on more mature plant tissues. BOM feeding reduces the productivity of established plants and is directly responsible for reductions in pasture palatability to livestock. Even in established pastures, damage from large infestations may significantly affect productivity.

The impact of mite damage is increased when plants are under stress from adverse conditions such as prolonged dry weather or waterlogged soils. Ideal growing conditions for seedlings enable plants to tolerate higher numbers of mites. 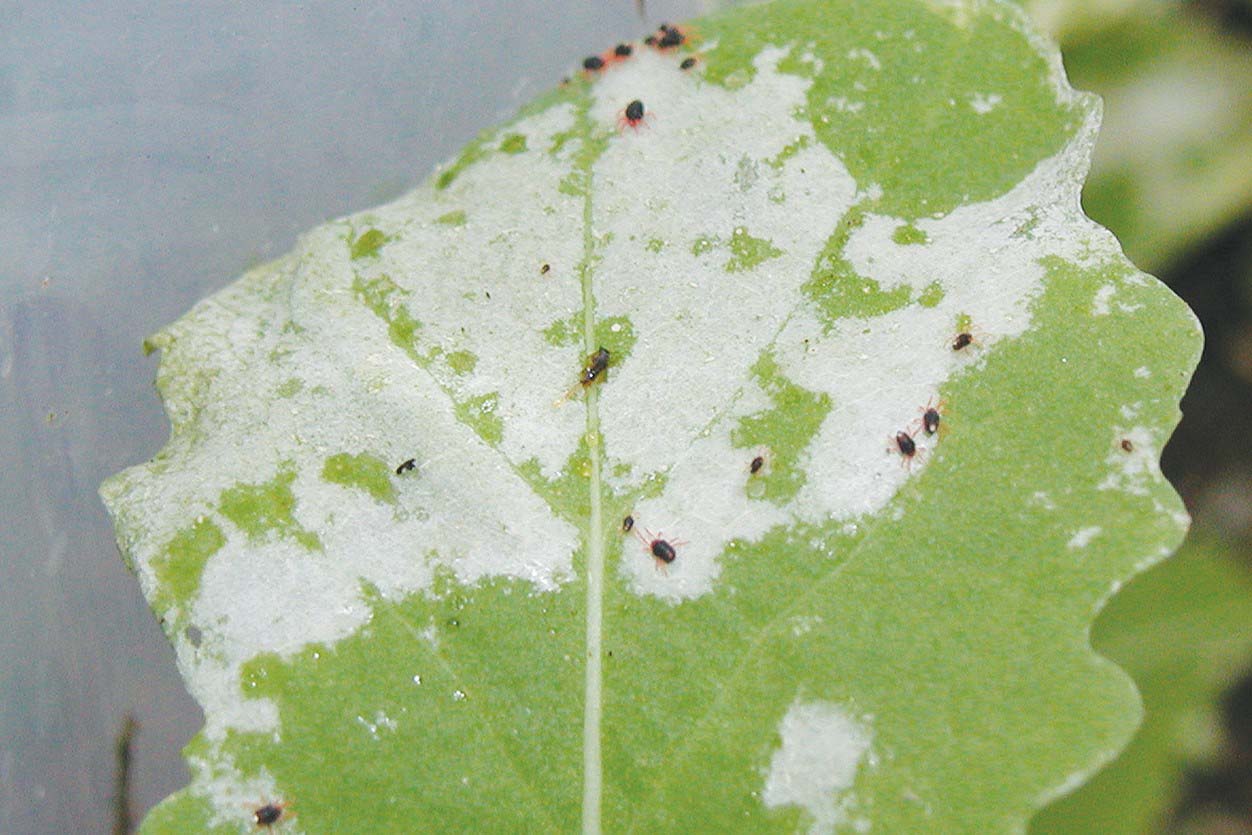 Carefully inspect susceptible pastures and broad-acre crops from autumn to spring for the presence of mites and evidence of damage. It is especially important to inspect crops regularly in the first 3 to 5 weeks after sowing. If mites are not observed on plant material, inspect the soil for mites.

Mites are best detected feeding on the leaves in the morning or on overcast days.

An effective way to sample mites is to use a standard petrol-powered garden blower/vacuum machine. Place a fine sieve or stocking over the end of the suction pipe to trap any mites vacuumed from plants and the soil surface. Place the contents onto a black tray, as this allows any mites that are present to be easily identified.

Chemicals are the most common method of control against earth mites. Unfortunately, all currently registered pesticides are only effective against the active stages of mites; they do not kill mite eggs. While a number of chemicals are registered in pastures and crops, differences in tolerance levels between species complicates management of BOM. P. falcatus has a higher tolerance to a range of pesticides and this is often responsible for chemical control failures. Ensure pesticide sprays are applied at the full registered rate. P. major and P. tectus have lower tolerances to pesticides and are more easily controlled.

For low-moderate mite populations, insecticide seed dressings are an effective method. Avoid prophylactic sprays; apply insecticides only if control is warranted and if you are sure of the mite identity.

Spring spraying using TIMERITE® is largely ineffective against BOM and is not recommended.

For information on currently registered and or permitted chemicals, check the Australian Pesticides and Veterinary Medicines Authority (APVMA) website. Always consult the label and Safety Data Sheet before using any chemical product.

Preserving natural enemies when using chemicals is often difficult because the pesticides generally used are broad-spectrum and kill beneficial species as well as the pests. You can reduce the impact on natural enemies by using a pesticide that has the least impact and by minimising the number of applications.

Cultural controls such as rotating crops or pastures with non-host crops can reduce BOM colonisation, reproduction and survival, decreasing the need for chemical control.

Many cultural control methods for BOM can also suppress other mite pests, such as redlegged earth mites. Many broad-leaved weeds provide an alternative food source, particularly for juvenile stages. As such, clean fallowing and the control of weeds within crops and around pasture perimeters, especially of capeweed and bristly ox-tongue, can help reduce BOM numbers.

Appropriate grazing management can also reduce mite populations to below damaging thresholds. Grazing pastures in spring to less than 2 t/ha Feed On Offer (dry weight), can reduce mite numbers to low levels, reducing the number of over-summering eggs produced and provide some level of control the following year.

This information note was originally developed by Paul Umina from Cesar Australia and reviewed by Leo McGrane and Paul Umina in 2021.