Leave the car at home and take a walk In August 2017, a Weed Spotter walking along a suburban street detected an infestation of Mexican feather grass (Nassella tenuissima) in a front yard. The infestation consisted of 16 large plants that had originally been planted in a row along a garden bed. It was obvious from the large size of the plants that this was not a new planting, and that the plants had been there for several years. There were also young, self-sown seedlings present. Agriculture Victoria officers responded to the report and all plants were removed, bagged and taken away. Agriculture Victoria will continue to monitor this site to detect any further seed germination.

Ironically, the Weed Spotter had passed by this same house many times in the last few years, but only by driving a car or riding a bike, never by walking. It was only by walking this street for the first time that the infestation was noticed. Walking has many benefits, not just for your health — and now we see how valuable walking can be for detecting State prohibited weeds. Joggers, cyclists, you're probably going too fast to notice but walkers go slow enough to be able to have a good glance into yards as they pass by.

Although yards with low fences will be the easiest to view, State prohibited weeds have been detected protruding out to the footpath through cracks or gaps in high fences. Some State prohibited weeds can grow underneath fences, meaning that infestations can easily spread from front and back yards onto footpaths, nature strips and even cobbled laneways that border people's backyards. By walking along footpaths and laneways, whatever plants are growing in back yards may be exposed. Now that the Spring has arrived, it is a great time to get out for more walks and do some Weed Spotting! If you see Mexican feather grass, or any other State prohibited weed, email weed.spotters@agriculture.vic.gov.au or call the Customer Service Centre on 136 186.

A vigilant property holder recently reported what he suspected to be Japanese knotweed (Fallopia japonica) on his property in Bendigo. Japanese knotweed is a State prohibited weed in Victoria and it is one of the worst invasive weeds in the world. Fortunately, on inspecting the plant, an Agriculture Victoria officer identified it to be a look-alike, bleeding heart (Omalanthus populifolius).

How to distinguish knotweed from bleeding heart? 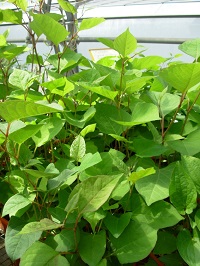 Japanese knotweed has characteristic hollow bamboo-like stems which have a zig-zag shape, whereas bleeding heart has a woody stem. Knotweed also dies off and loses foliage over winter but bleeding heart is an evergreen plant.

Importance of eradicating Japanese knotweed from the state

Japanese knotweed is a highly invasive weed that can rapidly invade riverbanks, gardens, natural areas and vacant lots. Young shoots grow as rapidly as 8cm a day in favourable conditions. The invasive root system is incredibly strong, and the plant can damage:

Reporting knotweed - what can you do?

If you see Japanese knotweed, please report it either through the Weed Spotter email weed.spotters@agriculture.vic.gov.au or call the Customer Service Centre on 136 186. Please do not attempt to remove or treat Japanese knotweed yourself. 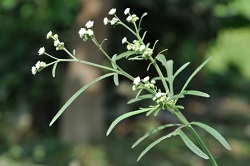 Parthenium weed (Parthenium hysterophorus) is not currently found in Victoria, but is considered one of the world's most aggressive weeds in pastoral land.

This noxious weed has established in New South Wales and Queensland, so incursions into Victoria are an ongoing threat.

Parthenium weed is notoriously difficult to manage or eradicate due to a capacity to produce extremely large numbers of seeds and a fast reproductive cycle. It is toxic to livestock, can inhibit the growth of other plants and cause severe allergic reactions in humans. It is an annual erect herb, growing up to 2 metres tall, with deeply lobed leaves on the stem and rosette. Pale green stems have distinctive longitudinal grooves, becoming woody with age and are increasingly branched towards the tips. Small white flowers, up to 1cm wide, are found at the end of each branching stem.

Parthenium weed is also known by the names:

Parthenium has been found in the Riverina region around Hay and Narrandera in southern NSW. Therefore areas of Victoria along the Murray River, from Corowa, Cobram, Echuca to Swan Hill, are particularly at risk of invasion. As it is most commonly spread by vehicles and farm machinery, roadsides and farm land are at particular risk of invasion.

If you think you have seen parthenium weed email weed.spotters@agriculture.vic.gov.au or call the Customer Service Centre on 136 186.

Mistaken identity and the spread of alligator weed Alligator weed (Alternanthera philoxeroides) is considered one of the worst aquatic and terrestrial weeds in the world. It is declared noxious throughout Australia. In Victoria it is declared as a State prohibited weed, the highest category of declared noxious weed under the Catchment and Land Protection Act 1994, due to its invasiveness and detrimental impacts.

Alligator weed is native to the Parana River floodplains of northern Argentina and adjacent countries. It was first recorded in Australia in 1946, at the Carrington docks in Newcastle NSW. It was most likely introduced from the dumping of ship's ballast water or cargo during the Second World War. The weed quickly became established throughout NSW rivers and flood plains.

In 1995, a Queensland weed scientist discovered alligator weed growing in their neighbour's vegetable garden. Follow up work over the next 5 years led to the discovery of cultivated plots of alligator weed growing in all Australian states and territories. A serious case of mistaken identity meant that the weed had been grown as a leafy vegetable for over 25 years by gardeners who believed it to be the popular Sri Lankan leafy vegetable mukunuwenna, or sessile joy weed. Agriculture Victoria ran a public awareness campaign and provided a replacement vegetable plant, Alternanthera denticulata.

Although this campaign was successful, the weed's persistent nature means that Agriculture Victoria still manages an alligator weed eradication program, with Departmental staff and contractors undertaking inspections and treatments on a regular basis. Currently in Victoria, there are 316 terrestrial and 89 riparian known infestation sites which require treatment or monitoring.

If you think you have seen alligator weed email weed.spotters@agriculture.vic.gov.au or call the Customer Service Centre on 136 186.

Keeping salvinia out of Victoria 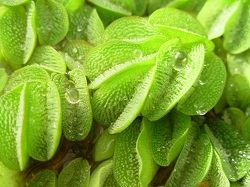 Salvinia (Salvinia molesta) is a State prohibited weed that currently has no known infestations in Victoria. While no new sites have been discovered in Victoria since November 2011, it is present in waterways in Queensland, New South Wales, Northern Territory and Western Australia and it is often detected in online trade, making incursions from interstate a significant risk.

Salvinia is a perennial aquatic fern which floats on the water surface and can form dense mats. In suitable conditions, salvinia spreads very rapidly to completely cover water surfaces in large mats. It can block waterways, reduce penetration of sunlight and decrease water quality. This can de-oxygenate the water, resulting in the death of fish and other aquatic fauna. Salvinia can also increase the rate of water loss from the water body through transpiration.

Agriculture Victoria have managed 29 sites of salvinia in Victoria since it was first declared as a State prohibited weed under the Catchment and Land Protection Act 1994. The majority of these were contained sites in water features or ponds which have a lower risk of spread or establishment in waterways and were eradicated almost immediately.

Weed Spotters have reported 9 confirmed cases of salvinia since 2009. Five of these were for sites in Victoria, which were managed and eradicated by Agriculture Victoria. The other 4 were reports of salvinia for sale online, at nurseries or at markets.

Victoria's most significant infestation of salvinia was discovered in East Gippsland in May 2010 and covered a number of connected farm dams, dangerously close to the Gippsland lakes. This infestation was treated by physical removal and follow up inspections occurred for 3 years, in which no re-emergence was found. The site was then deemed eradicated.

The story of salvinia in Victoria has been very positive so far and we hope Weed Spotters can continue to assist in ensuring that the State remains salvinia free.

If you think you have seen salvinia, please report it through the Weed Spotter email weed.spotters@agriculture.vic.gov.au or call the Customer Service Centre on 136 186.