Saltbush is a native, salt-tolerant forage. It is most suited to warm climates with low rainfall such as northern and central Victoria. It can be used to rehabilitate salt-affected soils — Class 2 (moderate) and Class 3 (severe) that do not waterlog.

The most commonly used species are:

Neither type is suitable for areas dominated by Samphire, which is an indicator of:

Saltbush requires a combination of both warm temperatures (>25°C) and moderate moisture for its growth, so it is less suited to most areas in southern Victoria.

With good management, saltbush can be a productive part of a grazing enterprise. Stands on less-saline areas can provide an opportunity to increase productivity by including inter-row species, such as medics. Land class or saline zone fencing to provide effective livestock control is a key to the success of saline rehabilitation with saltbush.

Land clearing following European settlement has caused the watertable to rise across much of northern Victoria.

In areas where watertables are within 2m of the surface, moisture can rise to the surface and evaporate — concentrating salts at the surface. The salt kills salt-sensitive vegetation. Salt-tolerant plants such as Sea Barley Grass dominate the area. Increasing levels of salts cause patches of bare ground known as scalds.

Saltbush stops this process by:

Winter rainfall then leaches salts into the soil. The top soil becomes less saline and can support more salt-sensitive forage plants, such as medics. These sites can be planted to saltbush primarily, with an optimum plant density of 2000 stems/ha or more.

These sites should be planted to widely spaced rows of saltbush at a density of up to 1500 stems/ha. 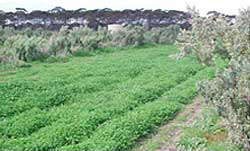 On reclaimable sites, the areas between the rows of saltbush can be sown to moderately salt-tolerant forage. Plant species such as Tall Wheat Grass, Puccinellia and a salt-tolerant cultivar of Yellow Burr Medic (Medicago polymorpha cv Scimiter). Then fertilise with phosphate fertiliser. Saltbush will also benefit from fertiliser.

Samphire and dash is a native species that indicates conditions are likely to be too wet for saltbush to survive. Areas dominated by samphire should be fenced separately to minimise damage by livestock.

The site should be spraytopped in the spring prior to planting, then ripped and mounded during summer to provide a seedbed. After autumn and early winter rains have leached salts out of the mounds, weeds should be sprayed and the seedlings planted in late winter or spring.

Fencing to control livestock is the single most important tool for the management of saline discharge areas and saltbush plantations. Samphire zones should be fenced to exclude livestock altogether. Saltbush needs to be fenced so that livestock can be made to strategically graze the stands.

The first grazing of a new stand:

This may be as early as eight months, but is generally 12 to 18 months after planting. Grazing must be closely monitored to ensure plant stems are not seriously damaged while they are young and fresh. Let livestock remove up to 80% of the leaves.

Mature saltbush requires grazing once or twice a year to remain productive. Saltbush must be grazed hard to promote fresh growth.

Autumn is the most common time to graze saltbush. The combination of understorey with saltbush can raise the total feed value to a maintenance level. The stand can also be grazed in spring if productive species are planted between rows.

Saltbush leaves have a high salt concentration (up to 30% of dry weight). Sheep can only consume up to 200 grams of salt per day. They cannot eat enough saltbush to maintain weight. A productive pasture between the saltbush rows means stock can eat more and maintain weight. Supplementary feeding is required in saltbush stands without any inter-row pasture.

Livestock grazing saltbush must have access to fresh water.

Of the many varieties available, Old Man Saltbush is the most suitable for planting in saline discharge areas, it is: