Owners of dangerous dogs have imposed on them a series of obligations to make sure that members of the public are not attacked by their dog. There are penalties for noncompliance.

This page provides an overview of the requirements relating to dangerous dog provisions in the Act and the prescribed requirements in the Domestic Animals Regulations 2015. This information can also be viewed on the Dangerous dogs fact sheet (PDF - 450.7 KB) .

The owner of a declared dangerous dog must make sure the animal is implanted with an ISO microchip in accordance with the regulations.

Within 7 days of the dog being microchipped, the owner must supply to the council where the dog is registered:

It is a requirement to desex all dangerous dogs that have been declared due to an attack. Newly declared dogs (due to attack) must be immediately desexed unless the owner obtains a certificate from a vet stating the dog cannot be desexed for health reasons. 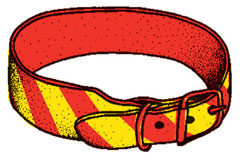 Whilst a microchip is a permanent form of identification it is not visible. Dangerous dogs must also wear a prescribed collar at all times.

The collar is specially designed to be visible from a distance and is reflective at night. This means that at all times, whether on the owner's property or not, a dangerous dog can be recognised from a distance. This warns a person of the potential danger of the dog.

Collars for dangerous dogs must:

Have a minimum width of: It is important for a person with a valid reason to enter the premises (such as emergency services personnel) to know a dangerous dog is present.

For details of suppliers of dangerous dog warning signs, contact your local council, or phone the Customer Service Centre on 136 186.

When indoors or in an outdoor enclosure, the dog must be housed in such a way that:

The dwelling and enclosure must both be constructed in such a manner that a person cannot have access to them without the assistance of an occupier of the premises who is of or over 18 years of age.

The owner must also provide an outdoor enclosure that must:

A combination of these may be acceptable. The mesh size and construction detail is specified so that the enclosure will be escape proof and so that people, particularly small children, cannot fit body parts such as hands into the dog enclosure.

The floor of the enclosure must be constructed of concrete and be graded to a drain for the removal of effluent.

The gate on the enclosure must contain a lock and it is a requirement that the enclosure is kept securely locked when the dog is in the pen.

A dangerous dog must be muzzled and on a lead whilst it is outside the owner's dwelling and the dog's enclosure.

If a dog that has previously been declared as a dangerous dog (due to attack) is found wandering at large, it can be seized and impounded and euthanased after 24 hours.

Owners must contact the council within 24 hours of impoundment if they wish to prove there were mitigating circumstances for the dog being at large (if this can be proven, the owner may be able to reclaim the dog).

The owner of a dangerous dog must notify the council within 24 hours if:

This keeps the council informed of the location of dangerous dogs at all times. The council will inspect the premises to make sure the regulations are being adhered to.

Owners who sell, give away or transfer the ownership of a dangerous dog must notify the new owner in writing that the dog is deemed dangerous.

Please email pet.welfare@agriculture.vic.gov.au if you would like a sample notification letter.

Owners of dangerous dogs are subject to criminal offences if their dog kills or endangers the life of someone.

Owners can be jailed:

This applies to owners of:

It is also vital for effective state-wide education programs, directed particularly at children.

Where the owner of a dog is under the age of 18 years, the parent or guardian of that owner will be deemed the legal owner of the dog and subject to any penalties or prosecutions.