Surface drainage is very useful in removing excess water from land to an artificial drainage system or natural watercourse in a controlled manner and as quickly as possible. This must be done with no damage to the environment.

Wet soil problems on dairy pastures are usually because of both excess surface and subsurface water. It is important to realise that surface drains will only remove surface water and, in most soil types, are almost useless for draining the soil profile.

Ditches or open drains vary in size and length and can be categorised as:

Shallow surface drains (up to 0.3m deep) formed by hand shovel or 'spinner cuts' are most useful for removing ponded water from shallow depressions to larger drains or streams. They are:

They tend to be temporary in nature since they:

Medium-sized drains (0.3m to 1m deep) made by excavators or specific drainage machines are usually V-shaped with a flat bottom with enough slope (gradient) to ensure that the water is removed quickly but not cause scouring of the drain walls or bottom. This is usually not a problem because they are used on the flatter areas. The velocity of water flow should be slow on the sandy and sandy clay loam soils and can be quicker on the clays and clay loams.

The size of open drains depends on the amount of water to be removed or intercepted. Formulae are available to calculate the required design parameters. 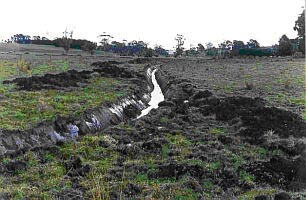 Consider the slope and soil type

Figure 2 shows what happens to drains with insufficient batter angle.

Be wary of constructing open drains in dispersive soil as they are highly prone to erosion. When to construct an open drain

The time to construct open drains is when the topsoil and subsoil is soft enough to dig but water presence is not a problem. This is usually in late spring, early summer and autumn.

Open drains can have the following disadvantages:

Grassed waterways are usually shallow, varying in width from narrow to metres wide, but are constructed so that they are often grazed as part of the paddock. They are sometimes used to bring drain outflows down slopes to prevent erosion without considerable expense.

Their steepness should be less than 1:4. A dense and unbroken grass sward is essential and should be established before it is used to discharge water. Avoid grazing the waterway while it is wet or draining water, particularly if the pasture is not well established.

The amount of water to be removed and the steepness of the slope will determine the size and shape of the waterway. A good rule of thumb is that the steeper the fall the wider the waterway. The bottom of the waterway should be as near to horizontal in cross section as possible so that the water spreads out evenly over the base.

The waterway must not be constructed in soils that are prone to erosion. Water passing down slopes that have clay subsoils should avoid saturation of large areas of this clay as it may result in landslips. Water passing down slopes should do so quickly in as narrow a channel as possible, but avoiding the possibility of erosion. Dense pasture swards assist greatly in soil stabilisation. Humps and hollows are useful in areas or on soil types that are not suitable for tile or mole drainage. They are also useful where the lack of suitable outfalls prohibit the use of tile drains, usually due to insufficient depth or fall.

The humps and hollows system comprises lateral surface drains that discharge into headland drains, which in turn discharge via short open drains or shallow pipes into natural watercourses or open drains (see Figure 4).

If possible these areas should not be grazed while the drains are still wet because they will become pugged. If this does occur then end of season maintenance must ensure that all the drains are reshaped or cleared to allow quick drainage.

The size of this drain type depends on the amount of water to be removed or intercepted. Formulae are available to calculate the required design parameters.

Size of the humps and hollows

Humps can vary from 10 to 20 metre spacings but the wider the hump, the more soil that must be moved, and the water run off may be substantially slower. Humps wider than this may not drain at all in their centres.

Disadvantages of humps and hollows

Humps and hollows make it more difficult for machinery activity such as fodder conservation. The humps may be overgrazed while the hollows may become pugged. The depth of topsoil must be enough to allow the humps and hollows to be formed without exposing the poorer and nutrient deficient subsoil. Alternatively, more soil will be required to be moved to ensure a covering of topsoil in the hollows for resowing pasture. If the edge of the hump is too steep, cattle trampling could cause soil movement into the hollows and possibly into watercourses.

These are surface channels, often formed on sloping land, in such a way that the earth removed forms a bank or levee on the downslope of the channel. Where used on slopes, the main purpose of graded banks is to prevent surface runoff from building up volumes and velocity that may cause erosion.

The banks must follow the contour of the slope with a gradual decline so that water flows constantly and does not build up in depressions, and so rendering the land below susceptible to landslips. The outfalls of the graded banks can possibly lead to dams for water collection for irrigation or stock water.

Bank spacing will depend on:

Spacings of about 30 to 50 metres for slopes with gradients of 5°to 12° have proven acceptable in most areas. Each bank should service a total area of up to about 3 hectares, with length not exceeding around 400 metres.

The channel will be at risk to erosion immediately after construction until a grass cover is established. Take care on slopes that may have shallow topsoil over dispersive subsoil, as severe erosion is possible in these soil types.

Levee banks may be used to confine large flows of water to certain areas and are often used to control floodwaters along streams. However, approval for use of levee banks in this situation is required from the local or regional water authorities.

Laser levelling is a relatively new practice used on irrigation farms to even out and speed up the water flow off flood irrigation bays. Although not common, laser levelling could be used on the 'flats' areas in high rainfall zones to ensure water moves off quickly and does not remain in depressions.