Which subsurface drainage system to use

Subsurface drainage can be achieved by:

Different soil types and characteristics require different drainage methods, so it's important to select the right drainage system for the soil.

To decide which subsurface drainage system is most suited your situation, you must investigate your soil's:

You must also figure out the soil's physical characteristics in the profile section to be drained. For example:

Testing involves taking soil cores so you have an understanding of what the soil types are below the surface. Examining the soil profile and measuring the soil permeability will assist in selecting the drainage method. Other simple on-farm tests can help to determine the suitability of the clay type for mole drainage.

Other factors to consider

It's also essential to know the likely location and level of the outfall for the proposed drainage system. If there's no suitable outfall, then no drainage is possible unless you use expensive sumps and pumps.

The gradient of the land can also influence the drainage type and its design.

Determining which drainage system to install

Examining the soil using the practical on-farm tests will help choose the best suited subsurface drainage system to install. These tests should be able to answer the following questions to help in making the decision.

Soils suitable for subsurface pipe drainage will be very permeable, free draining, down to depths greater than 1m.

There will be sufficient depth and gradient (fall) to allow a suitable slope for the slotted drain pipe. The location of the outfall must be such to allow this to occur. Although slotted pipe drains are very effective in permeable soils, pipe spacing would have to be so close on impermeable soils that they become uneconomical on their own.

Soils suitable for mole drainage will have a suitable proportion of clay content down to moling depth (400mm to 600mm) and minimal rock or sand at mole draining depth.

Many clay mineral types will allow the mole channel to hold its shape after moling. When the mole channel is 'wetted up' during drainage it will not slake (collapse), and will not be dispersive and prone to tunnel erosion. Some clay types are unsuitable for mole drainage and can lead to serious erosion if mole drained.

This might be because of the presence of sand or small rock to varying degrees at or near moling depth. The soil may be marginally suited to mole draining but having closely spaced subsurface pipes to drain water quickly should extend the mole drain life.

These soils typically are not suited to mole drainage. They may slake after wetting up or may contain sandy or rocky layers or areas.

Inserting permeable backfill via a specifically designed gravel mole drainer into the mole slots (actually square channels) will maintain the integrity of the channel slot allowing drain water to be removed.

Following are some practical on-farm tests that farmers and contractors can carry out to figure out which drainage system is best suited to the particular soil type to be drained. These tests are best and most easily carried out in winter when the soil profile is saturated. The same tests can be carried out in dry conditions (though with greater difficulty) — seek expert help if doing so.

If the on-farm tests are indecisive, have a reputable laboratory carry out soil tests to figure out the soil's permeability (bulk density), texture (sand, silt and clay) and suitability for mole drainage (slaking and dispersion tests).

Also consult an experienced subsurface drainage expert in the designing stage to assist with selecting a system and developing a drainage plan.

Dig holes and examine the soil

Testing a soil's permeability and its suitability for either pipe or mole drainage involves digging holes, collecting soil for slaking or dispersion testing and measuring the rate of water inflow into the hole. These can be done by the landowner or contractor.

As the hole is dug, take notice of:

The soil's permeability can be measured to provide a number, its hydraulic conductivity, which is valuable for selecting a drainage system.

This test will give a rough but useful indication of whether the soil is slowly or rapidly permeable. It's best to do this a day or so after the hole has been dug to allow the water table to return to a stable level.

You will need a timer or stopwatch (or second hand on your watch) and a flexible cloth-type tape measure with a small light float (for example, a small plastic vile) stuck to its end with the float base opposite the tape's zero reading.

Table 1 provides a guide of the rate of water movement through the soil through a saturated profile for a range of soil classes. The water flow rate (mm per hr) can be used to decide which drainage type may be most suitable.

As a rough rule:

Assuming the water inflow is entering the hole reasonably quickly and throughout most of the hole's depth, or at least, is entering in the lower section of the hole (below 500mm), the soil will most likely be suitable for subsurface pipe drainage.

If the topsoil is relatively deep (more than 200mm) or is relatively permeable but less so at depth (say 600mm to 800mm) then moles over a pipe system might suit.

If water enters slowly throughout most of the hole, the soil's permeability will be low. The earlier collected soil sample from moling depth will then need to be used to determine the soil's suitability for mole drainage.

Simple tests can be carried out with the soil samples collected at mole draining depth. These are the ring, ribbon and ball tests, which will determine whether the clay content and its type is suitable for sustaining mole drains (several years of life) or whether gravel mole drains are required.

If the soil sample has dried somewhat, add some water and knead the sample until it has the consistency of plasticine or putty.

The ring test will indicate the clay content and possible presence of sand or small stones.

Roll the soil sample between your palms into a rod-like shape of approximately 10mm diameter and long enough to form a ring of about 50mm diameter when the ends are brought together.

If the ring is hard to form (continually cracks or falls apart), it probably will not hold a mole drain as its clay content will not be great enough to sustain a mole channel.

If easily formed, clay content is high and possibly suitable for moling. Now check this soil for slaking or dispersion with the ball test.

Alternatively, the rod formed above could be squeezed between the thumb and forefinger to form a ribbon with a width of about 10mm to 13mm and thickness of about 4mm to 5mm.

If a long ribbon can be formed (greater than 40mm in length), then the soil has a high clay content.

If it continually breaks, clay content is probably too low for mole draining. Check for slaking or dispersion using the ball test.

The ball test indicates whether a soil is prone to slaking or dispersion, which will indicate its ability to hold the mole channel shape. 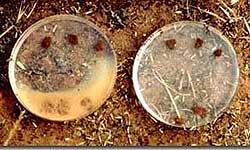 The petri dish on the right has surface and subsoil aggregates placed the same way in a gypsum solution. No dispersion has taken place due to the immediate electrolyte effect of gypsum.

In Figure 2, the same aggregates have also been remoulded (representing ploughing) and then placed into distilled water in the left petri dish. The results are that strong dispersion has now occurred with the surface soil as well as the subsoil. Again, no dispersion has taken place in the gypsum solution in the right petri dish. Although gypsum is very efficient at reducing dispersion in the upper layers of the soil profile, it is unlikely to penetrate to the depths where mole drainage occurs. Expert guidance is needed when designing a drainage system for dispersive soils.

To test for dispersion:

A soil that slakes or collapses quickly (within hours) is likely to be prone to slaking and, if wetted up after mole drains are installed, will reduce their life substantially. Gravel mole drains may be an option in these soils.

A soil may disperse quickly or slowly and is recognised by a cloud of clay colloids around the clay sample, which moves away into the body of the water when disturbed. Many soils may slake first and then disperse. Dispersive soils are a problem for any drainage system, so seek expert advice.

This flowchart can be used to help decipher the results from the practical on-farm tests and for choosing the best suited drainage system.

A whole farm plan for any likely future extension of the drainage system is crucial to allow for suitably sized main drains and outfall drains. Land topography must be considered also, such as water moving down slope to the flats, and occurrence and frequency of flood events.