A wetter-than-normal month in many areas has seen soil moisture rapidly increase particularly in the south-west and west Gippsland. The Mallee and East Gippsland were generally drier. Most areas are predicted to be at normal or wetter-than-normal moisture, with the exception of a region east of the Grampians, where monitored moisture probes confirm there is still plenty of spare room in the bucket, although some farmers would be happy with the good trafficability. Probes rapidly wet up from dry to saturated in the coastal and western south-west regions. Full profiles are the norm in the majority of monitored paddocks and with two months of winter to come, a prolonged period of waterlogging would almost be certain in the lesser drained soils.

The central Pacific Ocean is back to normal temperatures and the undersea has progressively warmed across to the east neutralising the cold, thus any reinvigoration of a La Niña looks some way off, if at all. Only two models keep it going and two others bring one back later in the year. Pressure, ocean and cloud patterns to the north of Australia are still lingering on in a La Niña-like pattern.

The Indian Ocean made some further slow progress towards a weak negative IOD event. The DMI has spent the month close to the threshold. There is warmer water to depth off Sumatra, stronger westerly winds and some more cloud off Sumatra. However, the pressure patterns are not looking quite like a typical −IOD event. It’s still the case that the −IOD is more developed off Java than the classical location off Sumatra. All models predict a −IOD to form and continue for this year’s growing season. Negative IOD’s have historically increased the odds of wetter conditions over most of Victoria, but East Gippsland has had a more erratic historic response.

The Southern Annular Mode (SAM) spent most of June negative and this had the expected outcome of allowing more frontal activity to pass particularly south of the Divide. Rain day numbers were higher than normal over much of the state.

Pressure patterns in the first half of June were lifted much further north of usual, allowing more storm tracks across Victoria but have recently been further south to equalise to a more normal position over the Bight. Pressure was much lower than normal over Victoria, meaning more rainfall triggers had passed and pressure remains lower to our far north, making it easier to get tropical connections to moisture when the right systems can link up to it.

My assessment of 12 climate models for Victoria shows likely wetter rainfall and neutral temperatures for the next three months.

The BoM Australian Water Outlook (AWO) modelled plant available soil moisture for pasture has increased greatly in the south-west and west Gippsland. Only an area east of the Grampians is drier than normal and the probes in this area confirm lower values. The moisture probe network shows many areas at saturation with many increasing this month where capacity existed. Pigeon Ponds increased by a massive 87 percentage points from 13 to 100, and Brim increased by 11 percentage points from 58 to 69. 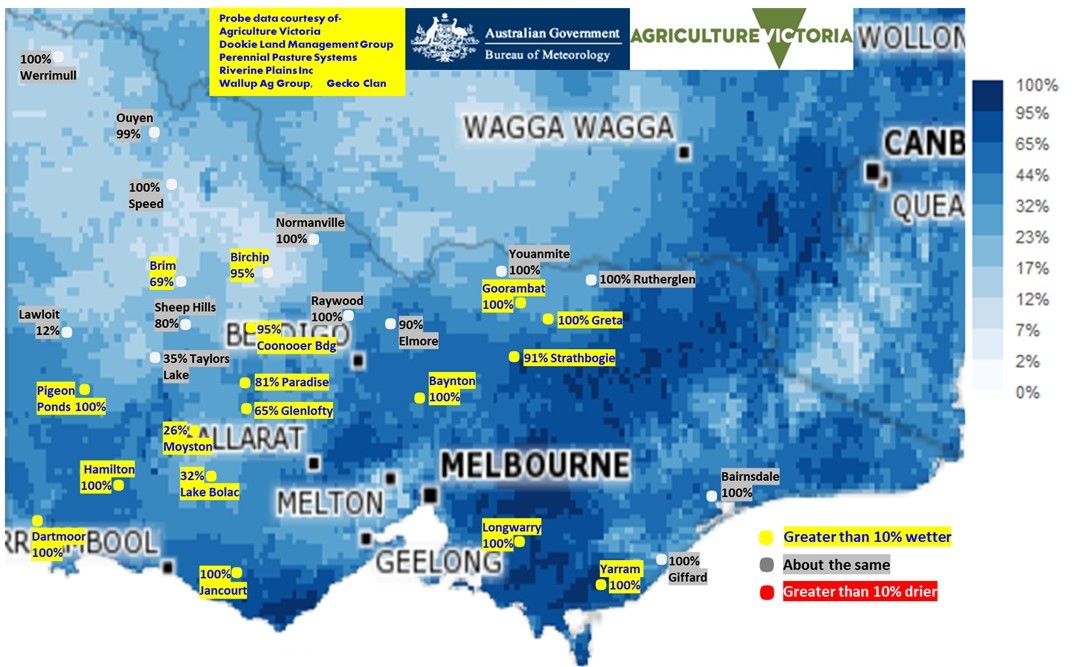 + Expand all- Collapse all

About the same for the last 30 days

Greater than 10 percentage points wetter for the last 30 days

Model distribution summary for the next three months

Predictions for July to September 2022, the outlook from 12 global model forecasts is for likely wetter rainfall across Victoria for the next three months. Predictions for July to September 2022, the outlook from 12 global model forecasts is neutral for temperature across Victoria for the next three months. Model distribution summary for the next four to six months

Predictions for October to December 2022, the outlook from nine global model forecasts is for likely wetter rainfall over Victoria for the four-to-six-month period. 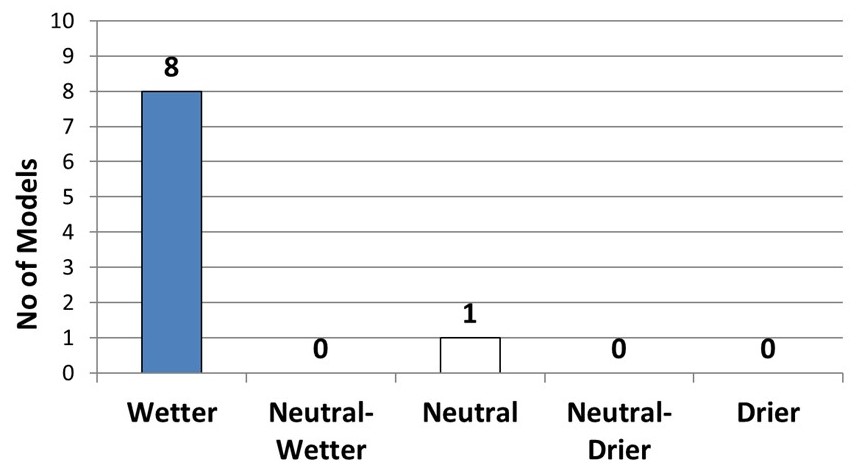 Predictions for October to December 2022, the consensus from nine global model forecasts is split between neutral or likely cooler temperature across Victoria for the four-to-six-month period. 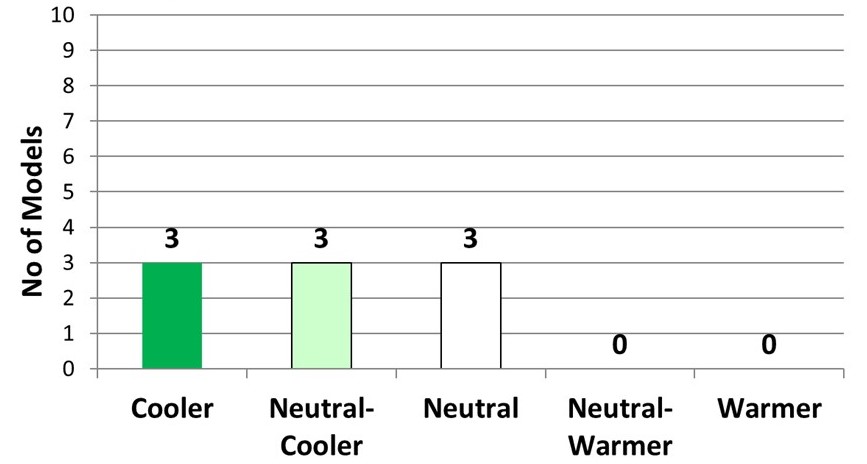 Model consensus forecast for the next six months

The Equatorial Pacific Ocean has warmed over June, with NINO3 and NINO3.4 values at −0.18°C and −0.30°C respectively (as of 27 June). The Pacific Ocean has progressively been approaching normal temperatures. The remnants of the La Niña event remain, with warmer water to the north of Australia. The majority of models predict this event is now over, but a few bring it back later in spring. The Dipole Mode Index (DMI) has been bouncing around close to the negative IOD threshold of −0.4 currently at −0.53°C but a classical −IOD eye of warmth off Sumatra is yet to appear. All models predict a type of −IDO to continue on for this year’s growing season but some models have a more Javanese-type warming than the classical Sumatran.

Sea surface temperatures are the key to the world’s rainfall. For more information on how they are measured, maps created and how to read them, check out our eLearn. The cool Pacific Ocean Equatorial sub-surface temperatures have further eroded with the easterly propagating warm anomaly almost fully across the basin. Only small patches of cooler remain. It would take a La Niña a while to come back from this position. The SOI has remained strongly positive throughout June currently +17.3 (at 27 June 2022). Values peaked at a whopping 23, fell and are currently rising again. Pressure patterns around the equator are behaving much like La Niña with lower pressure at Darwin and higher pressure at Tahiti. The DMI is the difference between the west and east boxes of ocean monitored for the IOD. It has moved above and below the −IOD threshold of −0.4 in the last month (currently −0.53 as of 27 June 2022) and yet to stabilise at negativity. Another month of negative behaviour and it is likely to be classified as an event. Wind direction and strength anomalies for the last 30 days

Easterly trade winds in the Pacific were close to normal during June. The lack of driving easterly wind force has allowed the central Pacific Ocean surface to neutralise. The westerly wind anomalies continue in the eastern Indian Ocean and will be needed to enhance and sustain a −IOD. 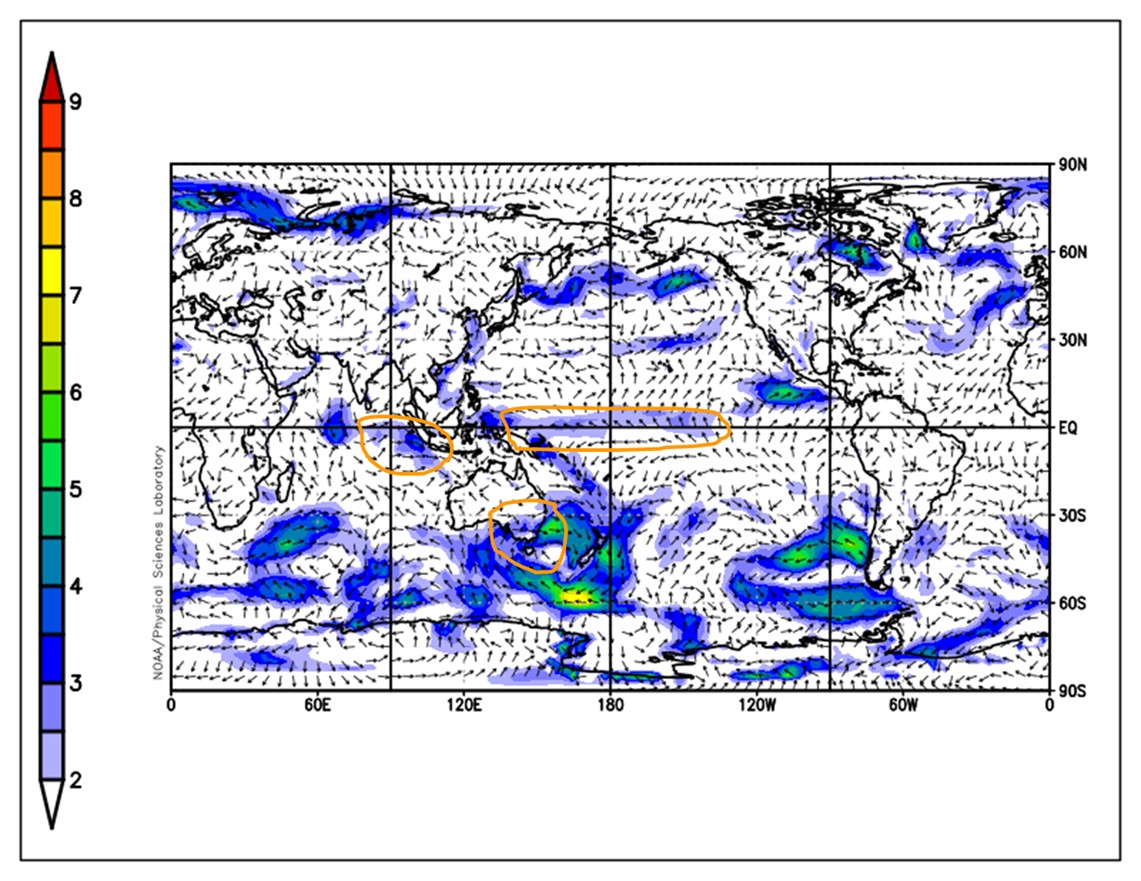 A lack of cloud over the international dateline junction with the equator remains as a lingering reminder of the recent La Niña event. An increase in cloud off Sumatra is −IOD like cloud behaviour, but the real pattern seems to be off Java which is not the classic position for greater cloud.

The Southern Annular Mode (SAM) or Antarctic Oscillation (AAO) has spent June in weak or strong negativity but is currently weakly positive. This has allowed frequent frontal activity to pass across the state particularly south of the Divide. The NOAA and BoM models are both in agreement of a brief strong phase returning to neutrality, but the BoM stays at neutral and NOAA return to weak positivity. A negative SAM in winter would be expected to push fronts closer to southern Victoria, and a positive SAM would pull them away.

In the past 30 days, the Sub Tropical Ridge of High Pressure (STR) has been showing normal behaviour, having been centred over the Bight. This has allowed frequent fronts across, particularly in coastal south-west Victoria. The sub-tropical ridge of high pressure has been lower over the whole of Australia and much lower over Victoria. This is indicative of more rain making trigger mechanisms like lows and fronts passing by. Pressure is higher at Tahiti and lower over Darwin, which is why the SOI is positive, indicative of La Niña-like pressure conditions. Lower pressure over East Africa and is not yet in keeping with a −IOD, which would normally see higher pressure in this region. Twelve climate models show their predictions for the next six months for the Pacific Ocean, Indian Ocean, rainfall and temperature for Victoria.

View a colour-coded version of this table: Modelled climate and ocean predictions for Victoria from June 2022 run models.

If this table makes no sense, visit our new e-learn which explains it.

Original images used in this document are sourced from the Bureau of Meteorology under a Creative Commons 3.0 licence and from the NOAA who have a Public Domain policy. Annotations highlighting areas of interest have been added by Dale Grey.