Water hyacinth on the Mornington Peninsula

A large infestation of water hyacinth (Eichhornia crassipes) was found on the Mornington Peninsula and reported to Agriculture Victoria in early 2017. The landowner reported the plants to Agriculture Victoria's customer service centre who passed the information along to the High Risk Invasive Plants team. The water hyacinth plants were rapidly growing across the surface of a farm dam on the reporter's property and were proving difficult to control. Once the landowner realised that the plants were a State prohibited weed, he was happy to allow Agriculture Victoria staff to manage the infestation as the treatment and disposal of State prohibited weeds is the responsibility of the Victorian Government.

Biosecurity Officers conducted an inspection of the dam and found hundreds of mature plants, many of which had the distinctive lilac-blue water hyacinth flowers. Water hyacinth spreads by producing hundreds of seeds from its flowers and also by growing daughter plants which grow from creeping stems. Infestations like this are able to grow and spread extremely quickly. In optimal conditions a water hyacinth infestation can double in size in 2 weeks. Fortunately, further investigations in the area did not find any sign of spread beyond the infested dam.

Almost a dozen trailer loads of plants and sediment were removed from the dam. As the plants were in flower when the site was discovered, there is the potential for seeds to germinate in coming years and for the infestation to re-emerge. As such, this site will be regularly monitored by Biosecurity Officers for many years to come.

If you see a water hyacinth infestation email weed.spotters@agriculture.vic.gov.au or call the Agriculture Victoria Customer Service Centre on 136 186. Alligator weed grows both in water and on land and can reproduce from stem fragments even after they have been treated with herbicide. The hollow stems float and can travel over large distances in water, and even a tiny fragment, as small as 1.5mm in radius, can grow into a new plant. This makes hygiene controls (that is ensuring that any propagules capable of growing are not accidentally spread) critical for minimising the spread of the species. During the 2016 to 2017 weed treatment season, a number of land and water based alligator weed sites managed by Agriculture Victoria, were found to have weed hygiene risks.

One of these risks was lawn mowing in infested areas, a known vector of alligator weed spread. When new infestations in mowed areas are identified, they are excluded from mowing by the installation of capped star pickets to prevent mowers entering the area and spreading alligator weed, both locally and potentially further afield by fragments carried on machinery.

These examples emphasise the need for diligence in weed hygiene matters, including working with land managers, considering all possible pathways of spread and ensuring hygiene control processes are in place. Good hygiene is vital not just for alligator weed, but in the management of all weed species.

If you see any alligator weed email weed.spotters@agriculture.vic.gov.au or call the Agriculture Victoria Customer Service Centre on 136 186. The response from Weed Spotters, both current and prospective, to Weed Spotter training has always been very positive. During Spring 2016, a total of 80 new Weed Spotters were recruited during targeted training sessions. This has boosted the total number of Weed Spotters that are currently registered to 2522. The new recruits have been drawn from various key stakeholders including:

Evaluations from the training sessions revealed that following the training, participants were more confident in identifying State prohibited weeds (SPWs) and would be more likely to report any infestations found to Agriculture Victoria. Participants also reported that live weed samples were a very effective training tool and the resources that were issued to them were comprehensive.

Some of the newly trained Weed Spotters recently made reports that led to detection and seizure of substantial amounts of water hyacinth from various properties in Victoria. In one example from March this year, about 840 water hyacinth plants were seized at a property in Warracknabeal following a detection by a Weed Spotter on a Buy, Swap and Sell group on Facebook. This highlights the important role Weed Spotters play in protecting Victoria from the biosecurity risks that these plants pose. As detailed in earlier Weed Spotter newsletters, Agriculture Victoria has been involved in investigating the use of detector dogs in the fight to eradicate hawkweed from the Victorian Alps.

In March 2016, Agriculture Victoria, OEH and the University of Melbourne collaborated on a formal evaluation of the dogs' ability to detect orange hawkweed under field conditions in Kosciuszko National Park. The evaluation directly compared the dogs with their human counterparts by having each search the same 50m × 50m plots and analysing what each team found. The key results showed:

These results suggest that dogs and humans have different strengths and that they are complementary in searching for hawkweeds.

In February 2017 the trial continued at Falls Creek. Three 1 hectare plots were selected, each with at least one known untreated hawkweed infestation. Each plot was searched by 3 teams:

In one plot all three teams missed the (extremely small) known infestation.

Detailed analysis of the results are underway, but the findings seem to reinforce that both human and dog teams have the capacity to find hawkweeds, and we are likely to achieve more by using them together than if the program relies on one approach alone. 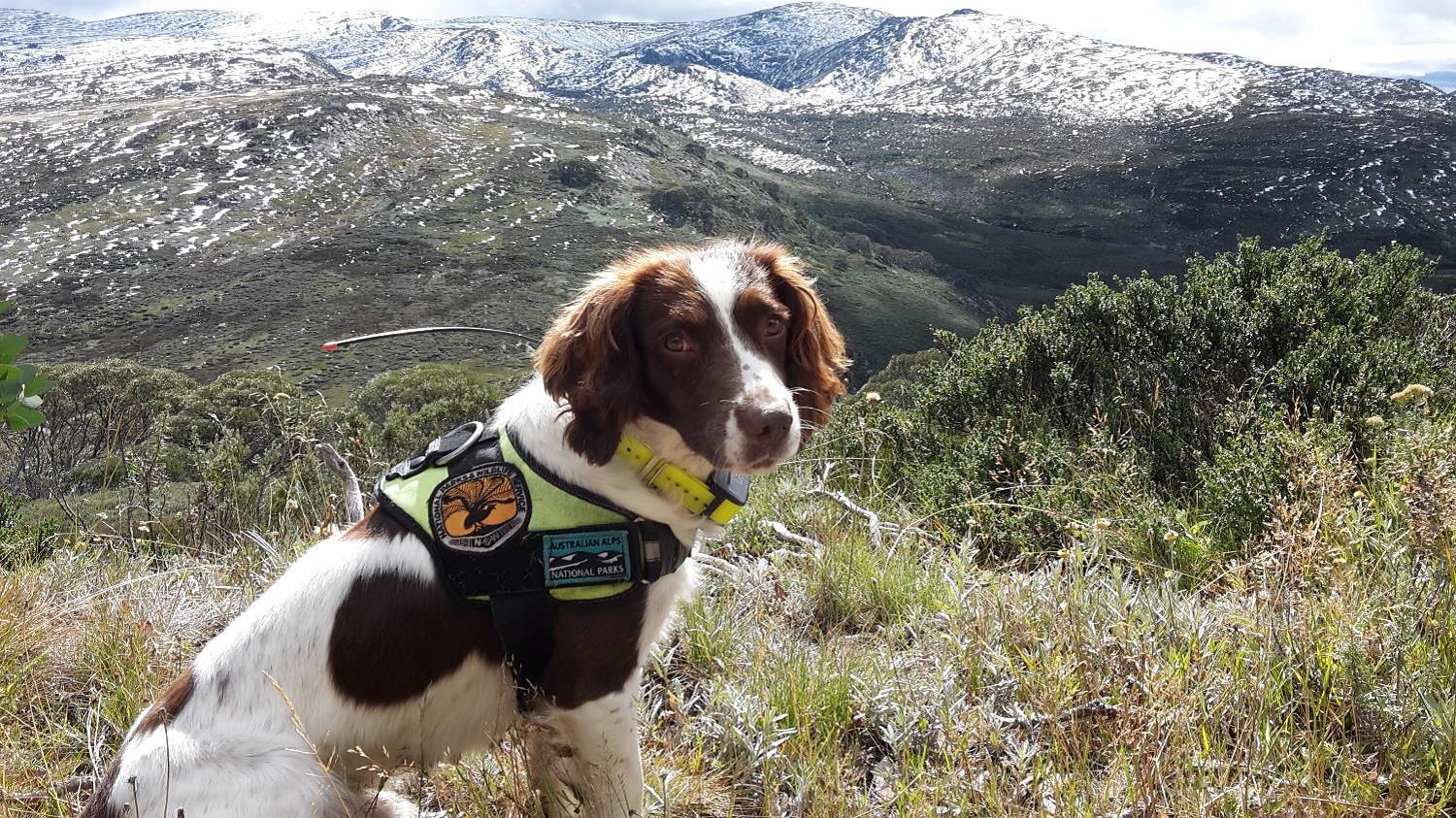 Japanese knotweed (Fallopia japonica) is a State prohibited weed in Victoria. This species was first detected at Falls Creek in 2002, growing in a ski lodge garden bed and on a nearby roadside.

The Japanese knotweed variety at Falls Creek is Fallopia japonica var. compacta: Japanese knotweed (compact form). This variety looks very different from the usual form, being much more compact (growing up to 1m) and the leaves are a darker green, more leathery and oval shaped. Flowers of the compact variety are often pink to red instead of white to cream, and it flowers in February and March at Falls Creek. Japanese knotweed rarely produces viable seed in Australia, but it readily reproduces via fragmentation of stems or rhizomes. Once disturbed, fragments may be dispersed over large distances by machinery, soil movement or flowing water. Dispersed fragments can then take root on moist ground to form new infestations.

It is most likely that the Japanese knotweed was deliberately planted in the ski lodge garden bed, then spread from this source to other locations at Falls Creek by vectors such as soil and water movement. It is thought that Japanese knotweed root fragments may have been disturbed and spread during the ploughing of roadside snow. In fact, two of the four knotweed sites at Falls Creek are located precisely where ploughed roadside snow has been stockpiled and pushed off steep car park embankments.

A delimitation survey was completed during March 2017, to detect any unknown infestations of Japanese knotweed at Falls Creek. Agriculture Victoria worked with Falls Creek Resort Management to identify locations where roadside snow disposal occurred, and locations where snow clearing machinery is kept. These areas were surveyed during the delimitation, along with the four known knotweed infestation sites. Officers comprehensively checked all sites for knotweed and also inspected downhill areas where water from melting snow or rainfall may have flowed and carried plant fragments.