Water hyacinth is one of the State prohibited weeds that has been reported for sale at markets. Markets are popular events during the warmer months and plant stalls are common as it is a great time to be out in the garden.

Plant sellers are encouraged to make sure that they familiarise themselves with the Victorian declared noxious weeds list to ensure they have a clear understanding of which plants are illegal to buy, sell, display or transport in Victoria.

From time to time, Agriculture Victoria receives State prohibited weed (SPW) reports from Weed Spotters or members of the public who have seen these species for sale at a weekend market.

These reports can be very difficult to follow up on as the stalls are often temporary. Many stallholders attend markets as a 'one-off' or have different stock for sale if they do come back to the market on another weekend. The information held by market organisers on stall holders is also often insufficient to allow contact to be made. Recently, a Weed Spotter reported seeing water hyacinth for sale at a weekend market in Melbourne. Agriculture Victoria staff followed up the report by conducting an inspection of the market on another weekend. Luckily the seller was at the market again and the plants were removed before they could be sold.

It is important to report SPW for sale at markets as the stallholder may be unaware of the illegal status of the plants they are selling and may continue to sell or pass on the plants in the future.

If Weed Spotters find SPWs for sale at a market, it is recommended they collect a business card from the stall holder, or if this is not possible then a name, business name and any contact details.

It is very important not to tell the stall holder that they are selling an illegal species as they may inappropriately dispose of the plants and cause them to spread.

The SPWs that you are most likely to see at markets are:

These species have been found at markets in the past, and reports have been made to Agriculture Victoria that we are not always able to confirm.

If you see a SPW for sale at a market email weed.spotters@agriculture.vic.gov.au or call the Customer Service Centre on 136 186. 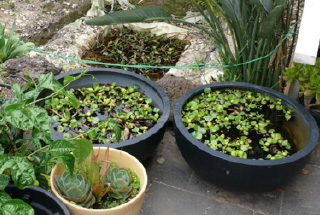 A keen-eyed Weed Spotter has found a significant infestation of water hyacinth in their local neighbourhood. The individual was walking down the street when she spotted what she thought might be five or six water hyacinth plants floating in a front yard pond.

The plants were not flowering so she was unable to identify them based on the distinctive purple flower, however she did notice the characteristic bulbous stems and suspected the plants could be water hyacinth.

Rather than simply wondering whether her suspicions were correct, she sent an email to weed.spotters@agriculture.vic.gov.au and Agriculture Victoria officers were able to visit the property and confirm that is was, in fact water hyacinth.

Officers discovered 296 water hyacinth plants spread across 15 separate tubs throughout the front and back yards — a lot more than only 5 or 6 plants.

The plants were originally purchased from a market approximately 7 years ago and as they multiplied in garden ponds on the property, the owner divided them up into other tubs. The owner is familiar with water hyacinth plants from seeing them in Cambodia and had no idea that they are illegal in Australia.

The Weed Spotter made an excellent decision to report these water hyacinth plants to Agriculture Victoria rather than telling the owner, which could have led to the plants being illegally dumped into a waterway or down a drain. The Weed Spotter said 'it is the round bulb which is so distinctive I think for spotting, and your department’s many photos of it over the years helped keep its image in my mind.'

Although water hyacinth has been found in ponds at various locations around Victoria, there are no known established infestations in open waterways. Water hyacinth seed can survive for 20 years or longer, so it is extremely important that the species is kept out of Victorian waterways to avoid permanent establishment in the environment.

If you see water hyacinth email weed.spotters@agriculture.vic.gov.au or call the Customer Service Centre on 136 186. 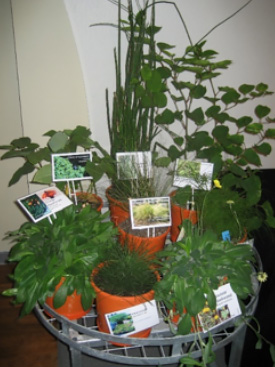 Agriculture Victoria recently recruited and trained 62 Weed Spotters from the Mallee to boost the number of people looking for State prohibited weeds (SPWs) in that region.

Three sessions were held at Irymple and Mildura over 2 days and participants came from a range of organisations, including:

These Weed Spotters were strategically recruited from groups that are most likely to spend time in places where State prohibited weeds might be found and who have the background and skills to identify these plants correctly.

Characterised by lively discussions and enthusiastic participation, the sessions were a huge success. Participants were able to look at and handle live specimens of several of the SPWs and really enjoyed the opportunity.

Feedback gathered during the training indicates that the sessions were well received with participants reporting increased confidence in identifying SPWs and being more likely to report SPWs to Agriculture Victoria if they find them in the future.

Weed Spotters are asked to look for SPW during their day to day activities to help prevent these high-risk invasive plants from entering Victoria — and detect them early if they are present in the state. An additional 62 new pairs of eyes in the Mallee is a significant contribution towards this collective effort.

If you see a SPW, email weed.spotters@agriculture.vic.gov.au or call the Customer Service Centre on 136 186.

Weed Spotters keeping up the pressure on alligator weed

Alligator weed management has been enhanced this season with several new reports of the species from people working on Melbourne waterways. Here’s a snapshot of the reports received during this year’s riparian alligator weed management season:

If you see alligator weed email weed.spotters@agriculture.vic.gov.au or call the Customer Service Centre on 136 186.

Japanese knotweed found growing in a public garden in Melbourne In December 2018, a Weed Spotter reported Japanese knotweed growing in a garden bed in a large public garden in Melbourne.

Agriculture Victoria later confirmed the plants as the dwarf form of Japanese knotweed (Fallopia japonica var. compacta). Only a small number of emergent stems were found in the garden bed and thankfully there was no evidence of any spread from the garden. The small infestation has since been treated.

Interestingly, most of Victoria's known Japanese or giant knotweed sites have been traced to original plantings in botanical gardens (or in the gardens of plant collectors), which had all been planted prior to the declaration of knotweeds as State prohibited weeds in 2003. Therefore, it comes as no surprise that this latest detection of Japanese knotweed (dwarf form) was discovered in an old public garden, where it most likely originated from a historical planting. Are botanic gardens and plant collectors' gardens likely places to find knotweeds? Yes, in fact even prior to their declaration, knotweeds were not available from mainstream nurseries, therefore these kinds of gardens are more likely than regular gardens to harbour them. Victoria's official botanic gardens were searched by Agriculture Victoria officers after knotweeds were declared — however, other gardens, especially private collections, may not have been inspected.

If visiting open gardens or private collections, be on the lookout for knotweeds and if you find a State prohibited weed in a garden, please don't approach the landowner, email weed.spotters@agriculture.vic.gov.au or call the Customer Service Centre on 136 186.