Several types of deferred grazing have been designed to achieve different management targets. The higher the proportion of desirable native species, the more effective the deferred grazing will be in boosting native pasture density and farm productivity.

With optimised deferred grazing, the withholding time from grazing depends on the growth stage of the pasture plants, generally from spring to late summer depending on seasonal variations. This deferred grazing starts after annual grass stems elongate, but before seed heads emerge so that the growing points of undesirable annual plants can be effectively removed by grazing. The completion of the withholding time for this grazing strategy depends on pasture conditions of the desirable perennial grasses (seed set, growth and herbage on offer), which are generally ready for grazing from late summer to early autumn. This strategy aims to reduce the amount of seed produced by annual grasses and alter pasture composition, lifting the proportion of perennials while suppressing the annual grasses.

Short-term deferred grazing involves no defoliation between October and January each year, aiming to increase soil seed reserves and plant population density. This strategy also allows use of feed in mid-summer when there is generally a feed shortage and may reduce fire risk by grazing long grasses early in summer.

Long-term deferred grazing involves no defoliation from October to autumn in the following year (the first significant rainfall event of the autumn/winter growing season). This strategy is used to build up the soil seed reserves and soil moisture and restore ground cover by perennial species. This strategy aims to rehabilitate degraded paddocks with a low percentage of perennial species (e.g. 5–10 per cent) quickly.

Timed grazing is an alternative form of long-term deferred grazing. It is used to build up the soil seed reserve, restore ground cover and recruit new plants. Pasture is grazed using a large group of sheep greater than 100 sheep/ha, over a short grazing period ranging from 10 to 20 days, depending on paddock size, followed by a resting period from 120 to 130 days. This strategy targets the rehabilitation of significantly degraded paddocks with a very low percentage of desirable species (e.g. ~5 per cent).

Ground cover remains greater than 70 per cent up to mid-January, regardless of grazing treatment applied (Figure 1). However, when a large amount of dead annual grass under set stocking is removed by grazing from January to March, ground cover declines dramatically, before increasing in April/May after rainfall. Ground cover is consistently higher with all deferred grazing regimes due to limitation of grazing over summer/autumn and increased perennial native grass population. The results from a long-term grazing experiment have shown that deferred grazing regimes significantly increased perennial (predominantly native grasses) and reduced annual grass tiller density (Table 1). However, there were no significant differences in the densities of onion grass, legumes and broadleaf weeds.

Soil seed reserve is the number of seeds in the topsoil (0–3 cm) measured in autumn. It is an indication of seed production from a grazing system in the previous seasons. 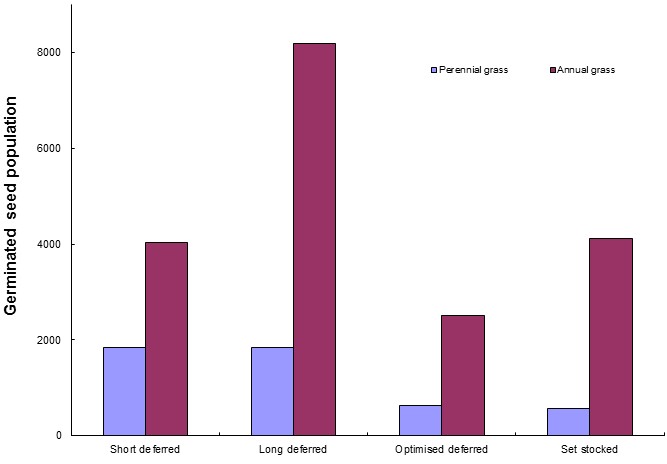 While deferred grazing dramatically increases soil seed reserve (Figure 2), it is important to know how these seeds, particularly from perennial native grasses, germinate and survive under various grazing systems. 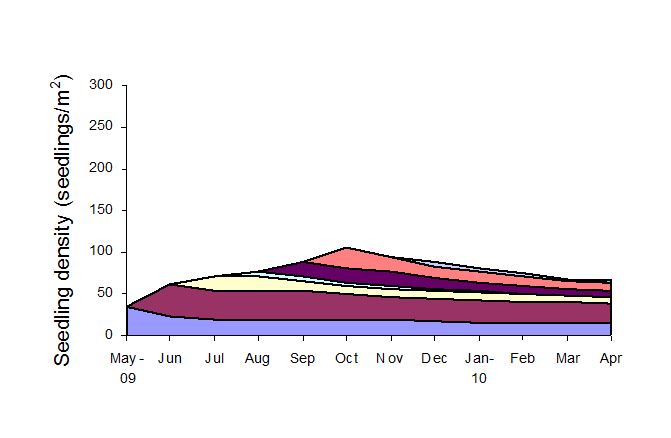 The effect of grazing wet soils is a potential problem for soil health. Stock treading can increase soil compaction and decrease soil porosity and water infiltration. Management options that reverse compaction without cultivation are desirable. Deferred grazing can lower soil bulk density by over 10 per cent by reducing soil compaction from stock treading, leading to increased soil pore size and water movement rate. The growth and subsequent decay of plant roots can enhance the activity of soil organisms, such as earthworms. Deferred grazing systems also increased the soil moisture content of the 0–10 cm topsoil and reduced soil moisture at deeper soil profile, which may contribute to recharge control.

Native grasses are adapted to Australia’s low-fertility soils, and some require less fertiliser for production and persistence than exotic species. However, in any grazing system, nutrients that are removed from pasture plants by livestock need to be replaced in the soil to maintain a balance between nutrient export and input. In general, application of some fertilisers such as phosphorus can increase herbage yield, and boost legume growth and pasture quality.

To implement deferred grazing strategies effectively and achieve the desired management targets, land managers need to have a clear understanding about pasture composition, growth stage, seasonal constraints and expected outcomes from each of the grazing strategies. These include:

Optimised deferred grazing is one of the most effective strategies to alter pasture composition and lift perennial grass population and production while suppressing annual grasses. This method should be used when there is a reasonable amount of desirable perennial species (greater than 20 per cent) in the pasture and the capacity for intensive grazing in spring (e.g. land-class subdivision and stock requirement) is met, allowing for flexibility according to climate and seasonal conditions. The timing of grazing for this method is critical – heavy grazing is required when most annual grass stems have elongated in late winter and early spring (depending on seasonal and regional variations) and before seed heads emerge.

Short-term deferred grazing is used to increase soil seed reserves and therefore plant population density, but it will not alter pasture composition as effectively as optimised deferred grazing. This method can be used when intensive grazing is not possible, when there is a shortage of feed in summer and when there is a need to reduce perceived fire risk. The benefit of short-term deferred grazing is to allow plant population density and groundcover to be increased, while in the interim provides time to bring about a long-term whole farm plan (e.g. land-class subdivision and stock requirement).

Long-term deferred grazing and timed grazing are used to effectively build up the soil seed reserve, restore ground cover and recruit new plants when a pasture is degraded and there is a very low percentage of desirable species (less than 20 per cent). These methods are expected to raise the desirable native perennials to a level (e.g. greater than 20 per cent) when optimised deferred grazing can be applied.

Strategic deferred grazing is designed to control weeds such as onion grass, alter pasture composition and lift perennial grass and legume yield. This method should be used where weeds are a major problem and resources are available to achieve the production targets in a relatively short time.

The theory behind ‘leaf stage’ is that the best time to graze a grass plant is when the first regrowing leaf starts to die down. This will effectively reduce pasture decomposition, maintain sufficient carbon reserve in the root system and increase pasture and animal production through optimum tissue turnover and improved nutritive value and pasture utilisation. Different native grasses have a different optimum leaf stage for grazing. Find the most abundant native grass species in the paddock and use the following leaf stage to determine commencement of grazing:

A summary of what can be achieved and requirements for individual grazing management strategies are given in Table 3.