Management options for broadleaf weeds in autumn and winter 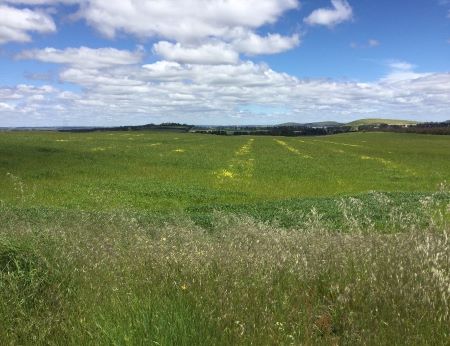 It’s important to have an effective broadleaf weed management program going into late autumn and winter. This will decrease the impact of weeds within your pasture system, by reducing weed seed set for the following year, therefore improving the productivity of pastures. Research into managing weeds in pastures suggests that combining a range of control methods is more effective and sustainable in reducing weed populations than any one method alone.

There are many broadleaf and grass species that are considered weeds within a pasture system and these vary in growth habit (annual, biennial or perennial), digestibility and toxicity to livestock. They also vary in tolerance to control methods such as herbicides, mechanical removal, and grazing management. Identifying weeds that are germinating and understanding their life cycles is helpful  for determining when to target a weed for control and which strategy to use.

Early in the season some broadleaf weeds, such as capeweed, can provide useful nutrition. However, these weeds will compete with desirable species for space and resources. In addition, they are short lived, 85 per cent water and lose feed quality earlier than perennial grasses and legumes. Producers need to consider the relative benefits of utilising these species as a feed source or removing them to allow more desirable plants to thrive. Targeted grazing and spray grazing are two strategies that can be used to control non-toxic weed populations early in the season.

Spray-grazing is a technique where sub-lethal application rates of the herbicides 2-methyl-4-chlorophenoxyacetic acid (commonly referred to as MCPA) and 2,4-D dimethylamine are applied in combination with tactical grazing. The application of these herbicides at sub-lethal rates acts to displace the water-soluble carbohydrates within the plant, therefore raising sugar levels, making weeds more palatable to livestock and reducing the root reserves of the plant. Spray grazing allows lower chemical rates to be used but grazing becomes more important.

There are a range of new combinations (multi active ingredient) pasture herbicides coming onto the market that show effective levels of weed control and can be applied early (from two trifoliate leaves in clover-based pasture). Visit your local chemical supplier for more information.

Weeds need to be sprayed when they are actively growing, and the optimum timing is around six to eight weeks after the autumn break. Stock should be withheld from grazing pastures according to the withholding periods specified for the herbicides used and then grazed at a high stocking rate of four to five times the normal stocking rate.

It is important to note that when spray- grazing in the autumn, some legume plants can also be affected by herbicide applications. The growth and persistence of desirable medic and clover species can be reduced if sprayed too early during development. The figure below shows when pastures containing legumes can be safely sprayed with common herbicides. Legumes should have the first trifoliate leaf present before considering herbicide applications.

Targeted or crash grazing can be used for species, such as thistles, where a tactical rest period after the autumn break allows pasture species to compete with broadleaf weeds. This forces the rosettes to grow more erect, becoming more available during grazing. A rest period followed by a short, high density grazing will reduce selective grazing by livestock. Target weeds are consumed, weakening or killing the plant.

It is important when using all herbicides to read the label, be aware of withholding periods and speak with your agronomist or chemical reseller about your options and applications prior to implementing a spray program.

Grazing animals on some weeds such as caltrop, marshmallow and Paterson’s curse may also cause nitrate poisoning, so this risk should be considered prior to grazing. Animals will need to be closely monitored during the grazing period. It is advised not to use young animals or breeding stock during spray grazing as they are more at-risk to health issues.

Finally, your pastures will remain more productive and will outcompete most broadleaf weeds by maintaining pastures above 1500kg DM/ha, ground cover of at least 80 per cent and applying fertiliser according to soil tests.