Efficient irrigation is applying the water needed by the pasture with a minimum of deep drainage or runoff.

Irrigation efficiency can be quantified by:

The design of an efficient border-check irrigation layout depends on many interrelated factors, including:

This is the depth of water needed to refill the pasture rootzone to full (field capacity). 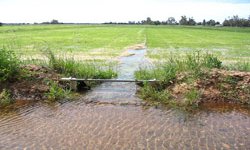 The recommended best management practice for irrigating perennial pasture by border-check irrigation in the Shepparton Irrigation Region (SIR) is to irrigate after 50mm of pan evaporation less rainfall (E-R) has occurred since the previous irrigation. This is equivalent to about 40mm of pasture water use. This is the target irrigation application, or the depth of irrigation needed to refill the rootzone.

A higher soil moisture deficit (a greater E-R interval — resulting in a drier soil profile) will increase the depth of water taken up by the soil during irrigation. However, higher moisture stress in the pasture will reduce its water use and productivity.

For most SIR soils, infiltration is typically quite rapid initially, before stabilising at a relatively low constant rate.

The ongoing final infiltration rate typically ranges from less than 1mm/hr for heavy clays to 5mm/hr for fine sandy loams  and is independent of the soil moisture deficit.

Considerable variability occurs with crack fill and final infiltration rate components, both between and within soil types, and within paddocks.

The infiltration characteristics of a given site can also change with time, subject to management.

For example, a site that has not been irrigated for some years can develop cracks in the sub-soil which allow higher than expected infiltration rates, but these can slowly decrease with irrigation over a season or even longer as the sub-soil wets up and swells.

Shallow watertables (0.5 to 1.0 m below the surface) can restrict infiltration, particularly in soils that would otherwise have relatively high final infiltration rates.

Ideally, bays should contain only one soil type, or at least, soils types that have similar infiltration characteristics.

This is largely determined by the site's topography, but can be altered by earthmoving.

Slope is important for drainage of excess water, particularly on medium to heavy soils. However, bays that are too steep can be prone to erosion and difficult to cover with water.

Slope affects the rate of the irrigation moderately, but has less impact on irrigation performance than the effects of infiltration rate, flow rate and bay length.

Bay length is often determined by the topography, supply channel and drain infrastructure, or property boundaries.

A minimum bay length of 300m is generally recommended to facilitate farm management, although shorter bays can be efficiently irrigated and may be appropriate in particular situations.

For most SIR soils with relatively low final infiltration rates, surface drainage following irrigation or rainfall is the major constraint to bay length.

Table 3 is a guide to the optimum bay flow rates for typical bay lengths and infiltration categories. The values have been derived using the Analytical Irrigation Model (AIM) developed by Austin and Prendergast (1997).

(Flows of less than 0.1 ML/d/m are generally not recommended because the shallow depth of flow makes full coverage of the bay difficult with even a moderate slope and good grading.)

Other things to consider:

Normally, the design flow rate adopted is the highest normally available from the water supply, to maximise irrigation labour efficiency.

Ideally, bays are designed to take the whole supply flow to maximise labour efficiency, minimise the number of farm channel structures and facilitate automation. Where the flow rate available exceeds that required for the selected bay width, two or more bays may be irrigated together.

Table 4 gives the total bay width needed to achieve specified flow rates per metre width of bay with various supply flow rates. However, there are practical constraints on bay width and area:

The minimum bay width is determined by the equipment used to construct the bay. Typically, a laser grader requires at least 30m width to operate efficiently, and this is generally recommended as the minimum bay width. However, 20m may be practical with smaller equipment.

The maximum bay width is limited by the desirability of achieving full coverage of the bay from one bay outlet, and economically by the high cost of earthmoving likely to be needed to achieve very wide bays. The coverage from the bay outlet depends on the flow rate, the slope, and the depth of flow, which depends on the surface roughness.

The bay area (length x width) is ideally the required rotational grazing area or a multiple of it.

The rate that water moves down the bay and the depth of flow on the bay depend partly on the density of the crop being irrigated — for example, water moves faster and shallower through a stalky wheat crop than through a leafy dense pasture. This is not normally an issue considered by irrigation designers, but is relevant where an irrigation model (such as AIM) is used.

Surface roughness is expressed as 'Manning's n'; a roughness coefficient used in hydraulic design. For perennial pasture, Manning's n values of 0.2 to 0.4 are common.

This is the time interval that water is applied to the bay for, or the cut-off time. It is the time required to apply the volume of water needed at the design flow rate.

Application times of 2 to 6 hours are common.

While some runoff is desirable to ensure that the whole bay is irrigated uniformly, too long an application time results in excessive runoff. While runoff is not wasted where it is collected in a drainage reuse system, excessive runoff (greater than say 5 to 10% of the target application) is undesirable, as water is on the bay surface for longer than necessary, potentially resulting in excessive infiltration or waterlogging.

The time to cut off the flow onto the bay is normally judged from experience, perhaps fine tuned by knowledge of the soil moisture deficit, and by the observed rate at which water advances down the bay. Typically, the optimum cut-off time is when water has advanced to half or two-thirds the length of the bay.

The intake opportunity time is the time that free water is on the surface of the bay. It is longer than the application time, and varies along the bay.

Collection and storage of runoff in a reuse system is essential for efficient irrigation. It is also critical for the effective management of nutrients to prevent them from leaving the property.

While a border-check irrigation system can be potentially very efficient, it must be managed appropriately to achieve that efficiency and to achieve its potential productivity.