Tail length — getting it right is important Tail docking and castration of lambs is a practice that most sheep farmers are very experienced in, but it is worth reviewing the 'best' tail length to reduce the incidence of flystrike and other conditions, such as rectal prolapse.

Sheep with very short tails are prone to rectal prolapse, as the nerves to the area around the anus can be damaged during the docking process. Many sheep observed at shows (particularly among short wool or Downs sheep) have inappropriately short tails.

Removing tails from lambs at a young age is accepted practice in Australia because it reduces the incidence of flystrike. Flystrike is caused by a build-up of manure around the butt, which leads to an accumulation of dags that trap moisture on the sheep's skin, making the area attractive to flies.

Dags are unwanted by people buying sheep for meat, and are removed from wool before marketing. Leaving tails at the recommended length means that sheep can lift their tails away to prevent soiling when manuring, and the stump provides protection from sunlight, which causes vulval cancers.

A study in the United States published in 2003 looked at the influence of three different tail lengths on the incidence of rectal prolapse on six properties. The lengths were described as either:

Lambs in the first group had an incidence of rectal prolapse that was 8 per cent higher than for either of the longer tail lengths. Other findings were that ewe lambs had a higher incidence of prolapse than males, and that finishing lambs on a high-concentrate ration rather than pasture also increased the chance of prolapse.

Acceptable methods to tail-dock lambs are either the hot (gas-heated) knife method or the use of rubber rings (for example, Elastrator® rings). Both these methods control bleeding and have a lower impact on the animal's welfare at the recommended ages for tail docking. Research shows that the preferred method is the hot knife method, followed by use of rubber rings. 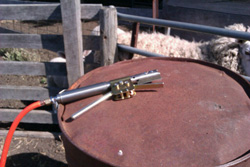 The gas knife cauterises blood vessels as the tail is cut, reducing shock from blood loss. Lambs suffer less initial pain and mother up more quickly than when other methods are used. However, the gas knife does require skill and practice to ensure that it is done properly, including maintaining the correct temperature.

The Te Pari Patesco® gas knife, which is produced in New Zealand, has a rotating anvil that stretches the woolly skin before cutting; it is suggested that this results in larger wool-free areas on the tail. One trial has shown that this knife does significantly reduce the amount of wool on the tail tip (merino lambs), and there were less dags in this trial (although not many dags were seen during the trial in total).

Whichever method is used, the key is to do it properly with regard to tail length and cleanliness.