The Saleyards and Abattoirs Surveillance Project provides a sample of the diseases present in the Victorian sheep and goat flock by examining those animals found not fit for purpose at such enterprises.

The project is modelled on the knowledge gained in the 2001 foot-and-mouth disease (FMD) outbreak in the United Kingdom, where the movement of infected (but not detected) sheep through saleyards spread the disease throughout the country. This project is co-sponsored by the Sheep and Goat Compensation Fund. 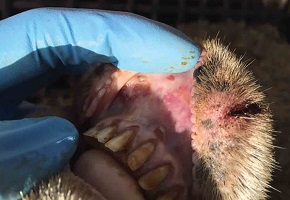 By going to aggregation points such as saleyards and abattoirs, Agriculture Victoria animal health staff can efficiently sample from the wider sheep population within Victoria (and, in some cases, from interstate). In 2016, a ewe with ulcers on her gums was detected at a Victorian abattoir — the lesions looked suspiciously like those of FMD. Lesions on the gums of a ewe examined in the Saleyards and Abattoir Surveillance Project that looked similar to those of foot-and-mouth disease. Fortunately, tests for FMD and other vesicular diseases proved negative, and the final diagnosis was ulcers due to injury. Such a finding confirmed the value of this project. The side story to this case was that the ewe originated from an interstate property, but the accompanying paperwork did not detail from where she had been dispatched.

A total of 200 sheep and goats are examined each year. Three key categories caused the majority of the diseases that made these animals unfit for purpose:

Blood samples from the animals examined are also tested for the emergency animal disease bluetongue, which doesn't occur in Victoria, also with negative results. Ongoing testing for bluetongue aids with the proof-of-freedom assurances Victoria provides to important trading partners such as China and the United States of the absence of this important disease.

Roughly one animal in every 1250 sheep or goats (0.08 per cent) transported to saleyards and abattoirs is unable to complete the journey, and these are the animals examined in this project. This percentage hasn't changed during the eight years that Agriculture Victoria has been conducting this surveillance, and is far higher than that recently reported for consignments to export abattoirs. Producers and consignors of livestock should take their obligations to the welfare of their transported animals seriously.

Are they fit to load?

You should not consign animals for transport if they:

For more information, download the Fit to Load Guide.