The Sheep and Goat Compensation Fund (SGCF) has confirmed continuing co-funding of three of the department's disease surveillance initiatives for the next three years (2015-18), with some slight modifications.

All of these activities are aimed at continuing to confirm that Victorian sheep remain free of significant exotic or emergency diseases, such as Foot-and-Mouth disease (FMD) or Bluetongue (BTV), that may threaten access to the lucrative local and export markets that we current service.

Staff will conduct a free post-mortem and laboratory examination and provide a written report with recommendations to producers reporting disease events, and updated results will be reported in future editions of Sheep Notes.

The only disease events excluded are losses in newborn lambs, but like the recent LKMSP, investigations into abortion and pregnancy loss will continue. 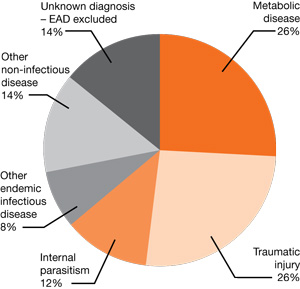 The Sheep and Goat Abattoir and Saleyard Surveillance Project continues the work of the formerly named Early Detection of Emerging and Exotic Diseases surveillance project. In this project, department animal health staff conduct surveillance for disease threats by examining sheep and goats that found unsuitable for their desired purpose at these locations, particularly for the aforementioned diseases FMD and BTV.

This concept is based on the experience in the United Kingdom in the 2001 FMD outbreak, where sheep silently spread the disease throughout the country.

In addition, two veterinary officers with experience in their respective species continue to have their positions co-funded by the SGCF. Dr Berwyn Squire (goats), Swan Hill and Dr Robert Suter (sheep), Attwood provide their expertise to the entire industry (farmers, advisors and Departmental staff) across the state.

In addition, the Significant Disease Investigation program continues. Producers can utilise their private veterinarian to conduct a disease investigation that is considered significant, and receive:

For more information, contact your local department staff or your local veterinarian.

There are also national subsidies for any disease investigations of older sheep with brain disease under the National Transmissible Spongiform Disease Freedom Assurance Program (NTSEFAP).

The Early Detection of Emerging and Exotic Diseases surveillance project has been running for the past six years, examining any sheep and goats found unfit for purpose at Victorian saleyards and abattoirs. In 2013-14, 14.5 million sheep were slaughtered at Victorian abattoirs, which equates to nearly the same number as the total Victorian flock. Many of these were sourced from interstate, and about one-third purchased by abattoirs at saleyards.

Only eight sheep in 10,000 succumb during their journey through saleyards or to abattoirs, which is a low number. But the results (see Graph) suggest that we can do better by ensuring sheep consigned for transport are 'fit to load'.

Some ewes examined were found to be suffering from pregnancy toxaemia, which occurs when heavily pregnant ewes are held off feed. Ewes in the last third of pregnancy (5 weeks before lambing) should not be transported. Other sheep that should be excluded from the consignment include those that are too weak, either through lameness or emaciation (starvation) to survive the journey robustly. Often, such ailments lead to the sheep suffering from transport trauma (26% of animals examined).

Disease surveillance at abattoirs and saleyards provides a convenient means to collect a snapshot of the disease status of the state's sheep flock, and continues to be co-funded as the Sheep and Goats Abattoir and Saleyards Surveillance Project.