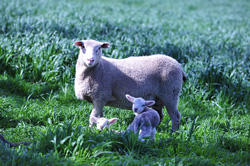 Joining ewes as lambs can be a rewarding and profitable practice if you have the appropriate nutrition and feed budgeting skills. If not, you will follow the path of others who have reported problems such as:

Success in joining ewe lambs comes from the interplay between:

Nutrition is number one, so you need to have this sorted out first. The key to success is high joining weights (Figure 1), and ongoing good nutrition and growth rates during this period. The ewe is still growing herself and so needs to lay down bone, muscle and fat, as well as divert nutrients to the developing fetus. Good joining weights set the ewe up for better conception rates (she is more likely to have reached puberty), and then higher lamb birth weights (and so better survival rates). This can even translate into subsequent higher lamb weaning weights. For both merinos and composites, these responses to joining weights are linear – more is better. As well, the heavier ewe lambs are at mating, the more twins they will conceive, further improving the success of this management strategy.

Genetics will interact with the nutrition provided – that is, the right mix of traits can improve the response to nutrition. Because live weight at joining is so critical, rams that have been selected for high early growth rate (post-weaning) will have daughters that reach joining weights earlier. This trait is called post-weaning weight (PWT) ASBV (Australian Sheep Breeding Value) and is available for rams that use the Sheep Genetics breeding evaluation service. We also know that daughters from rams that have higher genetic fat cover – post-weaning fat (PFat) ASBV – will have a further response above the nutritional and growth response. Number of lambs born (NLB%) is the other genetic trait that will help selection for more lambs from ewes, but this trait is less heritable than growth, fat and muscle.

Ewe liveweight at joining is the key to performance during pregnancy and lactation.

Effect of live weight at joining on birth weight and weaning weight of lambs.

Management (beyond managing the nutrition) will contribute to a good result. We recommend joining 1 ram per 50 ewes. These rams should be experienced rams. You can get a response to more rams per ewe, but realistically you might not have enough rams to do this, given the number of rams needed for the whole flock.

We also recommend putting in teasers (vasectomised rams or treated wethers) 15 days before putting the rams in. This is because many young ewes will have their first ovulation as a silent ovulation (when they will not mate),  so the opportunity to mate is limited, given that they will also have a shorter oestrus (joining) than older ewes.

So, to summarise, the key steps to achieve good results from joining ewe lambs (whether merinos, composites or crossbreds) is to:

For further information about Australian Sheep Breeding Values and an explanation of these traits (and where to get these rams), visit the Sheep Genetics website.

This article has been taken from the presentation High performing maidens given by Andrew Kennedy at the BESTWOOL/BESTLAMB conference in 2015.