A site at Reedy Flat (Figure 1) had a southerly aspect and was dominated by microlaena (Microlaena stipoides). The second site at Connors Hill had a northerly aspect and was dominated by red grass (Bothriochloa macra) (Figure 2). At each site, two areas were monitored: a control area (farmer’s usual practices) and a treatment area (grazing management and the application of phosphorus fertiliser). Ground cover, species composition, feed on offer, nutritive value and soil fertility were monitored in both areas. Summer measurements were critical, as this is the time of year when ground cover is traditionally at its lowest.

In 2019, the Reedy Flat treatment area had an Olsen P of 8.9mg per kg compared with a decline in the control area to 6.7mg per kg. The fertiliser application at Connors Hill increased the Olsen P to 10mg per kg.

The aim was to decrease competition from annual species, including weeds, through high pasture utilisation. Grazing was excluded over the summer (mid-November to mid-March) to allow native seed germination. The seed bank from native pastures is very limited and reliant on the current year’s seed set.

Grazing was only allowed in this period if significant summer storms (and therefore significant native pasture growth) were experienced.

Despite the area experiencing extremely dry conditions during the spring and summer of 2019, careful grazing management maintained very good ground cover. At Reedy Flat, ground cover was maintained at more than
90 per cent and the Connors Hill site recorded 81 per cent at the end of summer. However, because of the low rainfall, microlaena at the Reedy Flat site struggled to get above 1600 kgDM/ha, and the amount of feed on offer decreased due to moisture stress. As a result, during extended dry periods, the recommendation is to commence grazing microlaena pastures at 1600 kgDM/ha rather than 1800 kgDM per hectare.

Applying the right amount of fertiliser to native pastures and grazing at 1800 kgDM per hectare can maintain ground cover, mitigating the likelihood of soil erosion and weed infestation. The greatest benefits of this strategy were observed, and are more likely to occur, on northwest-facing native pastures.

At both sites, application of fertiliser resulted in a higher legume component of the pasture (54 to 60 per cent), which increased pasture quality. Crude protein and metabolisable energy were 25 per cent higher on the treatment areas than on the unfertilised control areas. The legume is important in terms of livestock production. However, its increase may have also lead to a slight decline in ground cover over the summer months.

The area’s long-term average annual rainfall is 700.8mm at Connors Hill and 780mm at Reedy Flat with the majority falling in September, October, November, December and February. Rainfall in this area has been well below average since the trial started, and has only recently received decent rains.

Basal cover is a measure of the presence of a species and is commonly used to measure plant persistence. When measurements are taken at the plant base, they are less affected by grazing, seasonal conditions and phenological development. A good perennial grass pasture may only have a total basal cover of five per cent for all species. At the Reedy Flat site, the basal cover of microlaena and wallaby grass was monitored (Figure 3). 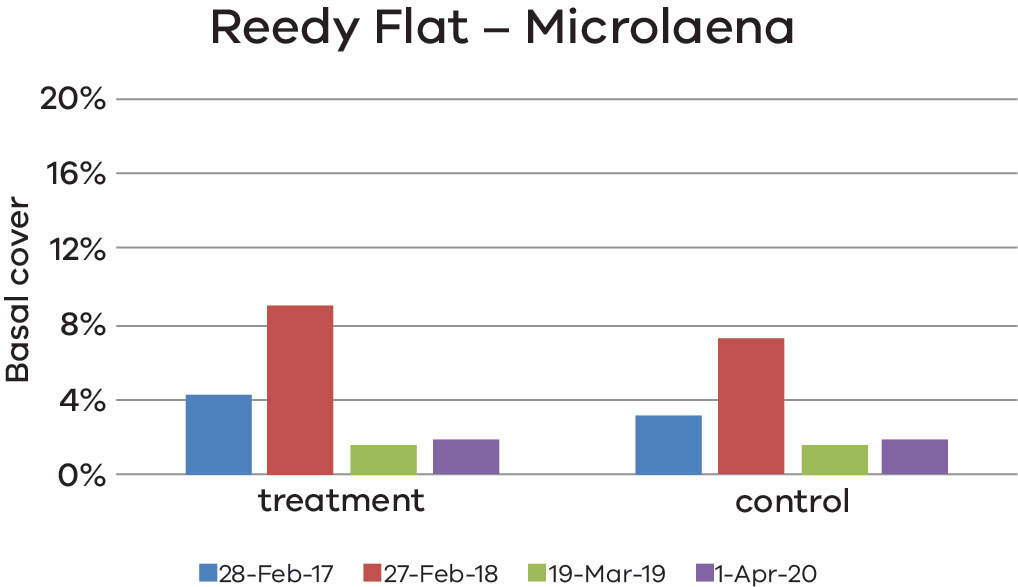 Figure 3 shows a decrease in the basal cover of microlaena in the treatment paddock from four per cent in the summer of 2017 to 2 per cent at the end of summer in 2019. The decline in 2019 was most likely due to the dry seasonal conditions. The increase in plants in both treatment and control areas in 2018 was related to the summer rainfall. In December 2017, 115.5mm was recorded (compared with a long-term average of 62.2mm), and a further 68.5mm was recorded in January 2018 (which is equal to the long-term average).

At the Connors Hill site, basal cover of microlaena, wallaby grass, red grass, windmill grass and spear grass was monitored. In the treatment area, there was no significant change in the basal cover. Figure 4 shows that the red grass component in the control area was initially much higher than in the treatment area, and so the changes over time are more notable than the actual proportion. In the control area, there was a decrease from 15 per cent in the summer of 2017 to 7 per cent in the summer of 2019. This decline was most likely due to the dry seasonal conditions. 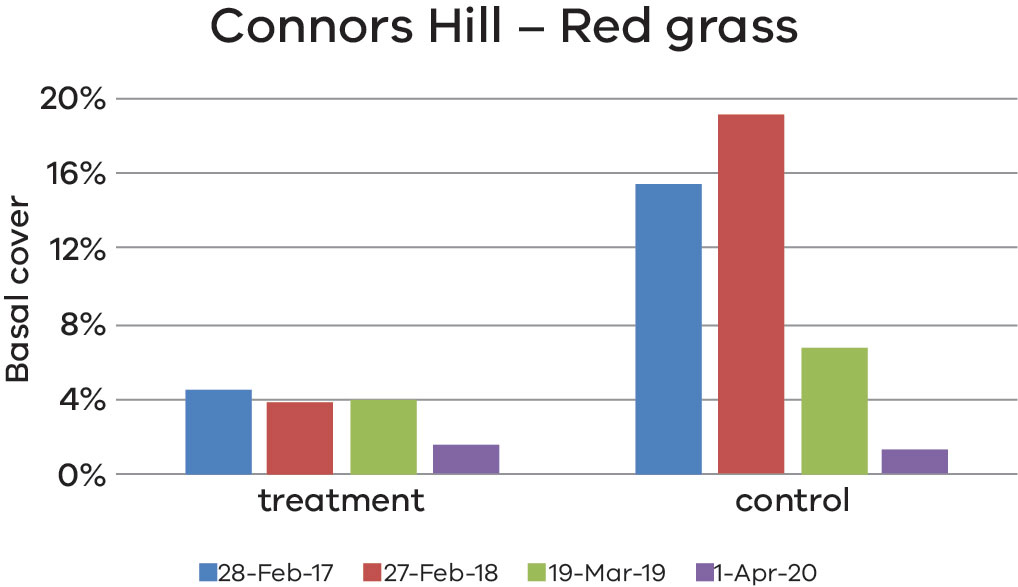 At the Connors Hill site, a slight increase in the amount of red grass, in both frequencies and basal measurements, was recorded. This was likely due to increased cover by the plants that are there, rather than to recruitment. It will be interesting to see if this trend continues.

This project is supported by the East Gippsland Catchment Management Authority, through funding from the Commonwealth Government’s National Landcare program and Agriculture Victoria.