Birds that appeared sick usually died within 12 to 24 hours, with deaths in affected lofts continuing for approximately 7 days (Figure 1). 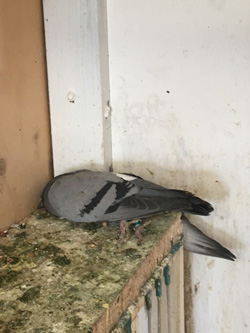 Mortality rates of up to approximately 30 per cent were reported in affected lofts.

Emergency animal diseases and notifiable diseases, such as avian influenza (AI), Newcastle disease virus (NDV) and pigeon paramyxovirus virus type 1 (PPMV1), were ruled out as the cause, as were adenovirus and herpes virus. A rotavirus (a member of the reoviridae family) was confirmed (Figure 2). Laboratory analysis of liver tissue by PCR and histology identified large quantities of virus of the Reoviridae family. This finding was confirmed by negative contrast electron microscopy.

Virus isolated from the liver of affected pigeons was inoculated into embryonated chicken eggs. Following the second passage, some pathology was evident. When samples of allantoic fluid were examined using negative contrast electron microscopy no virus was observed.

Next generation gene sequencing on liver samples from affected pigeons confirmed a rotavirus of serotype G18P.

Feral pigeons are likely to be susceptible to the virus. Any signs of disease that are unusual or clusters of deaths in wild birds should be reported.

In Western Australia, feral pigeon (rock pigeon – Columba livia) mortalities occurred in a location close to an affected loft, with gross and histological findings consistent with the disease in the racing and fancy pigeons. In addition, rotavirus had been detected in faecal samples of several feral and native wild bird species overseas.

To explore the risk of transmission of this rotavirus to other bird species (domestic poultry), challenge trials were conducted. The risk to the commercial poultry sector was considered low based on field experience.

It is noted that there was no indication that the PPMV1 vaccine was involved with this rotavirus disease.

An inactivated autogenous vaccine was developed in Australia that can protect all pigeons.

During the outbreak time, the pigeon industry investigated opportunities to develop a new vaccine.

Australia has a rigorous regulatory framework for assessing and approving veterinary vaccines to ensure their safety and efficacy. As part of this, there are strict penalties for the illegal importation and use of veterinary vaccines, including but not limited to up to 10 years imprisonment and fines of up to $1,800,000 under the Biosecurity Act 2015.

The pigeon industry was advised to implement biosecurity measures to prevent the spread of the disease. This includes reconsidering gatherings and movements (including racing) of pigeons, and practising good personal biosecurity and hygiene. The squab industry was also advised to take appropriate measures.

Biosecurity recommendations for the pigeon industry and private veterinarians are available from state departments of agriculture.

Additional general biosecurity resources are also available and include:

It is important for bird keepers and others to continue to report any suspicious signs of disease. This will also allow the presence of notifiable diseases, including AI, PPMV1 and ND, to be investigated and ruled out.