Downy mildew of Impatiens species and cultivars was detected for the first time in Victoria, Australia in 2006. It was subsequently found in New South Wales and Queensland. The entry pathway of the Victorian detection is not known.

The disease is caused by the fungus-like Plasmopara obducens. It can cause:

Impatiens represent around 10 per cent of the bedding plant sector in Australia.

It has previously been found in North America, Asia and Europe. Affected leaves may appear mottle and then yellow and may fall prematurely (figure 2), or they may collapse. Plants can be stunted and produce small pale leaves with few or no flower production (figure 3). 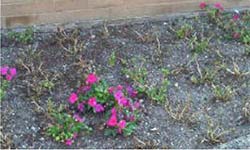 Early symptoms of downy mildew infection may be difficult to detect as the characteristic white downy growth is restricted to the underside of leaves, and leaf symptoms may be confused with nutritional deficiencies or mite damage. The disease is spread over short distances via water splash. It can be spread over long distances by spores dispersed in air currents, movement of infected asymptomatic cuttings, and possibly in seed.

Infected seed when sown, may produce systemically infected plants. Such plants may have a long latent period before symptoms are seen.

The host range apparently includes only cultivated and wild species of impatiens.

In Victoria the disease has been found in both single and double flowered commercial types.

Overseas records indicate that I. walleriana, I. balsamina and I. noli-tangere are hosts. There are also unconfirmed reports that New Guinea hybrids (Impatiens x hawkeri) are hosts.