Blueberry rust is a plant disease caused by the fungus Thekopsora minima. It affects a range of plants in the Ericaceae family, including:

Blueberry rust is a fungal disease of a range of plants in the Ericaceae family, including:

Conifer hemlocks (Tsuga spp.) are the alternative hosts that the rust requires to complete its life cycle in colder climates. These species are believed to be uncommon in Australia, but in mild climates such as Australia's the rust can survive without completing its lifecycle.

To date, blueberry rust has only been reported on blueberries (Vaccinium spp.) in Australia. Southern Highbush varieties and their cultivars are more susceptible to the disease than other varieties.

Where blueberry rust is found

In Australia as of August 2021, the disease is present in Victoria, New South Wales, Queensland and parts of Tasmania.

The disease has also been found in: 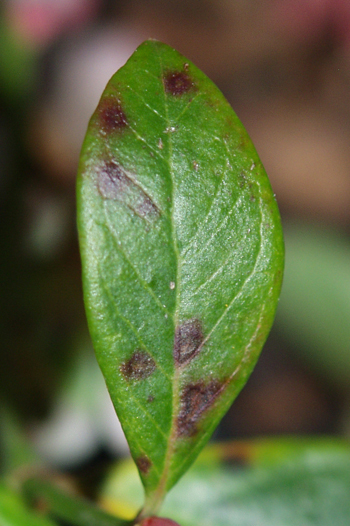 The following symptoms (see Figures 1 and 2) can indicate blueberry rust:

In severe cases, leaves can turn brown and drop prematurely. This defoliation reduces plant vigour and, in the following year, crop yield. Serious defoliation can lead to the death of susceptible cultivars. Blueberry rust has up to 5 life stages and produces different spores at each stage.

New pustules can be produced and release spores every 10 to 14 days, with more rapid spore production occurring under favourable climatic conditions.

The millions of spores released from the pustules spread easily. The spores can re-infect the original host plant, as well as other blueberry plants and other host species.

The disease is found mainly on the leaves of infected plants. It produces millions of spores that are very easily and quickly transported on the wind, but can also be spread through:

The optimum temperature for spore production is around 21°C, but new infections are unlikely when the temperature is over 30°C.

The rust can overwinter on evergreen blueberry leaves in milder climates, but is more prevalent in warm, wet conditions.

There are a number of actions that you can take to minimise the spread and impact of blueberry rust. This includes: