Downy mildew of parsley is caused by a fungus-like organism called Plasmopara petroselini. It occurs in Europe and can causes crop losses of up to 100 per cent. It has not been reported in Australia.

White spots appear on the upper surface of leaves and as the spots enlarge, they become angular and turn yellow (Figure 1). 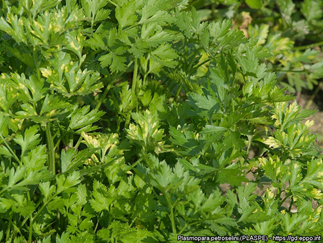 On the corresponding under surface of the leaf a white to greyish fluffy mat develops. This is the mycelium of P. petroselini (Figures 2 and 3). The disease will rapidly spread in exceptionally warm and humid weather. The fungus requires living tissue to grow.

Spores are produced overnight on the under surface of leaf spots and released in the morning as the humidity drops. These airborne spores are dispersed by wind. They are deposited on the leaf surfaces and require water for germination and infection.

Resting spores (oospores) are produced in leaf tissue and survive in crop debris. It is not known if the disease is seedborne, but spores may contaminate the surfaces of seed.

Downy mildew disease in parsley has not been reported in Australia to-date. If you suspect you have downy mildew symptoms on parsley plants, please report to the Exotic Plant Pest Hotline.