Cypress canker is the most significant of the disease that currently affects exotic conifers in Victoria. There is no proven cure for this disease.

Cypress canker attacks at least 25 conifer species of the Cupressaceae family in many parts of the world, including Australia, the United States and Europe.

It's not known to affect other plant families.

Cause of cypress canker

Previously this disease was thought to be caused by a single Seiridium species, but scientists now believe that 3 species (S.cardinale, S.cupressi and S.unicorne) can cause the same symptoms.

These fungi have been present in Victoria for more than 50 years.

A large number of dead and dying cypress trees have been observed in rural Victoria.

Our investigations in south and west Gippsland, the Mornington Peninsula and the Western District have found trees affected by various fungal pathogens, in particular cypress canker (Seiridium species), but also Botryosphaeria, Phomopsis and Pestalotiopsis species.

These fungi can all cause dieback symptoms, especially when environmental conditions have put trees under stress. They are a mixture of:

We believe that the last drought weakened the cypresses and left them vulnerable to infection.

Disease development has also been favoured by waterlogging or warm, humid conditions in some areas. 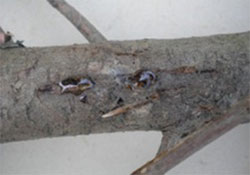 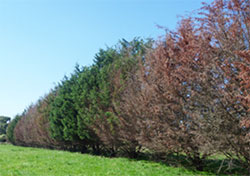 Hot, humid weather, drought and insects such as bark beetles can speed up the decline of trees infected with cypress canker because of splitting bark and poor wound responses from the tree.

Cypress canker infects a plant through spores (conidia), which are carried on the wind, in water droplets or by insects. Spores that land on healthy foliage can germinate under warm, moist conditions and infection occurs through natural fissures in the bark or through scars caused by mechanical damage (pruning, animals or falling branches).

The pathogen then girdles twigs, branches and the main trunk, interfering with the sap-conducting system and causing the foliage to die. Death may occur progressively from branch to branch.

New local infections can also develop when spores are washed down the tree or splashed from tree to tree by rain or overhead irrigation. They can also be transferred from plant to plant on pruning tools, or through the transport of infected cuttings or plants.

More than 25 conifer species can be affected by cypress canker, but susceptibility varies between the species.

Generally, older trees are more susceptible but any tree is susceptible if in a stressed state (for example, through drought, waterlogging or poor nutrient status).

Management of cypress canker is the responsibility of the land owner or manager.

In significantly affected trees, the only long-term option might be to replace them with known tolerant cypress species or varieties.

Cypresses can also be replaced with unrelated plant species, such as Australian natives, including for use as shelterbelts.

In re-planted or existing cypresses, canker damage can be minimised by ensuring trees are well sited and well managed. For example:

There are no fungicides registered for the control of cypress canker.

Cypress canker is not a regulated disease in Victoria and there are no legal restrictions on the movement of host plant material. However, to minimise the risk of spreading the disease, don't move infected material from the property unless it's covered or in a sealed container.