Powdery mildew of apples, caused by the fungus Podosphaera leucotricha, forms a dense white fungal growth (mycelium) on the host tissue and affects:

The disease stunts the growth of trees and is found wherever apples are grown. It's also been reported on pear and quince, though damage on these hosts is rarely seen in Australia. 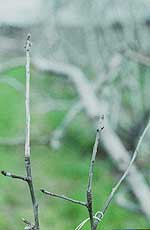 Dormant shoots that were heavily infected in the previous growing season:

Other shoots might look normal but the fungal mycelium can overwinter in otherwise healthy looking fruit or leaf buds. Secondary mildew infections can appear as a powdery mottling on either side of the leaves. Early fruit infection causes a web-like russet on the skin that can be difficult to distinguish from early spray damage.

Less commonly, fruit might be distorted and partly covered with a white powdery coating of spores. 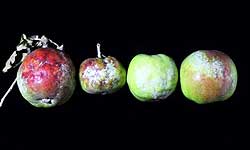 Powdery mildew can be a problem in all Victorian apple districts where adequate control measures are neglected. Highly susceptible cultivars include:

Powdery mildew is favoured by dry conditions, unlike apple scab, which is worst in districts of high rainfall.

Losses attributed to powdery mildew are hard to quantify. They include:

Heavy infection that continues over several seasons can reduce yields by up to 80 per cent.

The fungus overwinters in fruit and leaf buds, and the first powdery mildew symptoms occur on flower trusses and shoots that emerge from infected buds in spring. Spores from these infected leaves give rise to secondary mildew infections on the leaves of shoots, which are rapidly extending throughout spring and early summer.

Spores from all sources infect newly formed buds in leaf axils. Fruit buds on spurs are susceptible to infection by powdery mildew for about 1 month, between pink bud and petal fall.

Leaf buds are susceptible to infection for about 1 month after they appear in the axils of leaves on extending laterals. But the terminal buds on laterals can be infected throughout the period of lateral growth.

Infected buds are generally not killed but provide the main source of primary infection in the following season.

You can try to control powdery mildew by:

There are several features of powdery mildew that make control difficult. Powdery mildew develops in the absence of rain, and at temperatures above 20°C.

The emergence of new leaves on rapidly growing laterals makes complete protection with fungicides difficult. Also, the buds in leaf axils are protected by leaves, and are difficult to reach with fungicides. Control measures must be applied thoroughly to be effective.

The terminal bud is most commonly infected with powdery mildew, so can be a source of spores that infect new leaves and buds.

The humidity at the surfaces of leaves is an important factor influencing germination of spores. Maximum germination occurs at high relative humidity, but not in free water.

High relative humidity occurs at leaf surfaces when the air is calm, but it's reduced by air turbulence. Trees with open canopies have more air turbulence and less powdery mildew than trees with dense foliage.

Similarly, manage wind breaks in such a way that turbulence is reduced enough to prevent fruit damage, but not so much as to result in completely calm conditions that favour mildew development.

Monitoring for mildew during winter and the growing season will assist in making decisions about mildew control measures. Finding mildewed terminal buds in winter can help you to plan mildew control strategies for the coming spring.

You can assess shoots with infected terminal buds immediately after flowering using a minimum of 10 trees per block. For assessment of secondary mildew infection:

Inspect the top 5 unfolded leaves per shoot for mildew, and record the incidence of mildewed shoots. Assess the same trees at intervals during the growing season.

If mildew levels increase over time then you might need to improve your control measures.

As a result, to protect fruit, leaf and terminal buds, you need to spray frequently from pink bud until the end of lateral extension.

The frequency of spraying is more important than the dosage of fungicide. In orchards with a history of mildew, you must spray at least once every 2 weeks if control is to be effective.

High-volume sprays are generally more reliable for mildew control, although recent work has shown that low-volume sprays can be equally effective.

A range of fungicides is registered for the control of powdery mildew, and your choice will depend on costs and any experience with phytotoxicity.