What is Bovine Johne's disease (BJD)?

There is no treatment for BJD. While certain antibiotics may provide some temporary relief, infected cattle will inevitably die.

BJD is caused by the bacterium Mycobacterium paratuberculosis. These bacteria can survive 12 or more months in a favourable environment, such as swampy or wetter areas of a farm.

What are the signs of BJD? 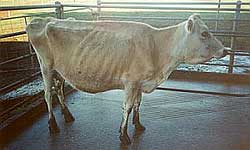 Cattle are usually infected when less than 12 months of age. However, due to a long incubation period, clinical disease is often not seen until the affected animal is at least 4 or 5 years of age.

Signs may appear after a period of stress such as:

As the bacteria lodge and multiply in the wall of the small intestine, the cow responds by producing inflammatory cells. This combination of bacteria and cells leads to a thickening and distortion of the gut wall. Eventually the gut fails to absorb water and nutrients.

They may also develop 'bottle jaw', a swelling under the jaw.

How are cattle infected with Johne's disease?

Cattle up to 12 months of age are most susceptible to infection, particularly calves less than 3 months old.

Infected cattle may also shed the bacteria in their milk. When calves drink this milk they can become infected.

Managing the risk of BJD

Management of BJD is on a voluntary, risk-based approach at the farm level, the same as for many other endemic livestock diseases. With a strong emphasis on good biosecurity practices, this approach puts the management of BJD in the hands of the cattle owner.

The voluntary approach recognises the importance of sound biosecurity practices being implemented on farm, including the seeking of a properly completed National Cattle Health Declaration when purchasing stock.

Good biosecurity is important not only for BJD, but for all animal diseases. Biosecurity practices should be undertaken on a market driven approach, that is, dependent on the requirement of markets that the producer is targeting.

A commercial vaccine (Silirum®) is available to assist in the control of BJD.

Cattle producers are encouraged to work with their veterinarian to manage BJD on their property.

The introduction of infected livestock is the most likely way of introducing BJD onto a property.

Cattle owners are strongly encouraged to seek assurances about the health of any livestock being introduced to their property. The easiest way that this can be done is by seeking a properly completed National Cattle Health Declaration from vendors when purchasing stock.

There are no entry requirements specifically relating to BJD for cattle entering Victoria from other states or territories.

Cattle must be identified with a National Livestock Identification System (NLIS) (Cattle) device and be accompanied by a completed National Vendor Declaration.

Entry requirements should be obtained from the relevant authority in the destination state or territory.

Obligations if BJD is suspected or diagnosed

Consistent with the agreed national approach, BJD remains a notifiable disease in Victoria.

Although a suspicion or diagnosis of BJD in cattle will need to be notified to Agriculture Victoria, no further regulation will be applied as a result. For example, there will be no restriction on the movement of livestock from the property.

Agriculture Victoria will not apply a BJD herd status to cattle herds in Victoria. Herd statuses previously applied (including CattleMAP status) are no longer applicable.

Cattle producers are encouraged to work with their veterinarian to manage BJD.