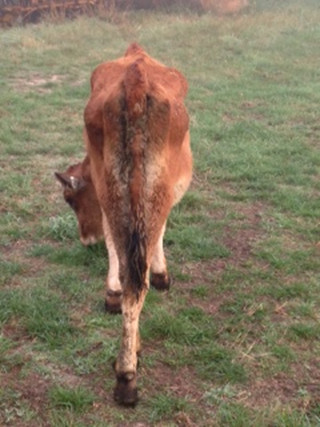 Upper alimentary ulcerative syndrome (UAUS) is a syndrome of calves for which no aetiological agent has been identified.

The syndrome was first observed in Victoria in 2013, with affected herds diagnosed across the three main Victorian dairying regions; similar syndromes have also been reported in New Zealand and the United Kingdom. Cases occur predominately between the months of February and July.

The syndrome typically affects weaned calves up to approximately eleven months of age and presents with weight loss and scouring with upper alimentary tract ulceration and enteritis.

However, a diagnosis of UAUS cannot be made based solely on clinical signs. Lesions are usually most severe in the oesophagus, with multifocal to coalescing areas of mucosal epithelial necrosis at all depths of the stratified squamous epithelium visible.

Affected animals are generally unresponsive to parasiticides and only occasionally responsive to antibiotics.

Although UAUS is uncommon, affected herds can suffer high morbidity, but relatively low mortality rates. It has also been found to affect calves on the same property over a number of years. Calves that recover can return to normal health, usually after a lengthy convalescent period. The clinical presentation is similar to mucosal disease and salmonellosis; however, laboratory testing has confirmed that these are not the cause of UAUS.

Other common causes of diarrhoea such as internal parasites and yersiniosis have also been ruled out by laboratory testing.

Although the syndrome suggests a viral aetiology, extensive viral studies have to-date been negative.

Treatment of clinical cases should focus on supportive care and the prevention of secondary infections.