The small hive beetle (SHB) is a native of Africa where it occurs in tropical, subtropical and warm temperate zones — mostly affecting weak honey bee colonies.

In October 2002, SHB was detected in New South Wales and Queensland, the first occurrence in Australia. In these States, the greatest amount of SHB damage occurs in apiaries located in the warm coastal fringe.

In Victoria, the small hive beetle (SHB) was first detected in apiaries in north-west Victoria and the Goulburn Valley in 2005. Since then, adult beetles have been found in central and north-east Victoria and at Montrose. There has been no widespread breeding of SHB in Victoria and consequently there is no widespread population of the pest throughout the state.

The full effect of SHB on Victorian beekeeping will only be known if the beetles spread and their numbers increase. Beekeepers need to change some beekeeping practices to minimise the effect of SHB.

SHB may have up to 5 generations during the warm months of the year. Breeding usually stops during cold winter months. SHB populations are likely to be highest in areas that have loose sandy or sandy-loam soil (see the pupae section of this page) compared to areas with hard clay soils. 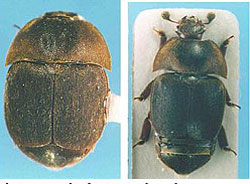 Spread of the small hive beetle

Beetles may fly distances of up to 7 km. They can follow the migration of swarms.

SHB may spread by:

Beetles can also be transferred on protective clothing and bee veils.

Adults may be present for extended periods in hives that show no signs of damage by SHB larvae.

SHB is not spread by queen bees and escorts that are hand caught and placed in new queen cages for sale to beekeepers.

Minimising the impact of SHB

The aim of these practices is to reduce the number of beetles around the apiary and honey extracting plant to help reduce the level of infestation in hives. There are no chemicals approved for use in beehives for the control of SHB.

Beetles will mostly choose weak colonies in which to breed. It is best to unite weak colonies to form stronger ones. Alternatively, weak colonies can be strengthened by adding one or two combs of sealed brood taken from strong healthy colonies.

Make sure the colonies are free of American foulbrood disease before uniting them. Don't place SHB infested combs and material onto colonies free of SHB because the infestation will soon spread throughout the entire hive.

The combined odours of honey, pollen and adult bees attract adult SHB to apiaries. Beetles are more attracted to hives that have been opened especially when bees are squashed. Opening a hive and manipulating the combs also appears to trigger female SHB adults already present in the hive to lay eggs, which results in a rapid increase of SHB larvae.

While it is recommended that the opening of hives be kept to a minimum, it is still necessary to inspect brood during the season for signs of American foulbrood and to conduct normal hive management.

Combs not covered by bees are especially prone to SHB damage. Supers of combs should only be added to hives when they are required.

As a guide, only add a super when at least 70% of combs in the hive are filled with honey and/or brood. Excess combs are best removed from the hive and then protected and stored as described below.

Combs of honey left above clearer boards are unprotected by bees and heat generated by the colony can provide a favourable environment for fast development of SHB larvae. The honey combs should be removed from the hive for extracting as soon as the bees clear the supers.

Keep hive bottom boards clean. Discarded comb, burr comb and beeswax scraps left around the apiary will attract beetles and encourage them to breed. These items should be collected and removed for processing.

Hives with dead colonies should first be inspected for presence of American foulbrood (AFB), and if found free of AFB they should be removed from the apiary and stored as described below.

Notify an apiary officer from the department listed below if there is a suspicion of AFB.

Infested hive components and combs, should not be placed on hives with bees until they have been treated to kill all SHB lifecycle stages.

Combs not damaged by larvae, but taken from infested hives may contain eggs. These are best cold treated before reuse. Bees are unlikely to accept combs with slime or contaminated honey.

Keep hives in the sun

Extract combs of honey immediately after removal from the hive

Combs of honey may appear free of infestation but could have SHB eggs or very small larvae at the time of removal from the hive for extracting.

SHB eggs hatch within 2 to 4 days and contamination of the honey combs will soon occur as larvae develop. The risk is greater if pollen and honey bee brood is present in the combs. Combs that contain even small amounts of brood should not be brought into the extracting premises.

Beetles may also lay eggs on combs set aside for extracting. The hatching larvae can quickly ruin the honey and combs.

Keep the extracting premises and hot room free of dead bees, wax and other debris that may attract SHB.

The hatching of SHB eggs is inhibited when relative humidity is below 50%. The circulation of dry air between combs of honey waiting to be extracted can provide complete or almost complete protection from SHB damage.

Cappings should be melted and processed into beeswax cakes without delay to avoid infestation and damage by SHB. Pollen is also at high risk and can be protected by packaging into sealed containers and freezing as described below.

Clean up around the honey shed

Discarded and unprocessed comb, beeswax scraps and slum gum left around the honey extracting plant will attract adult beetles and provide an opportunity for them to breed. These items should be melted and processed without delay.

Extracted combs (stickies) and other drawn combs are prone to SHB infestation, particularly if they contain pollen and brood. Steps should be taken to protect them.

Research conducted by the NSW Department of Environment and Primary Industries (Levot et al, 2005) found that all SHB lifecycle stages were susceptible to cold temperature.

The minimum exposure times needed to disinfest boxes of empty stored comb were:

If combs of honey or pollen are to be cold treated, allow additional time for the combs to reach the required cold temperature before commencing the actual treatment period.

After cold treatment, items to be stored should be immediately placed in a sealed container, strong plastic bag or other SHB proof environment to avoid becoming infested again. Storage in cold rooms, as for wax moth prevention, is used.

Both SHB and greater wax moth larvae may be found in the one hive. Both species have 6 legs near the head, but wax moth larvae also have small, less developed, prolegs in pairs along the body.

Unlike wax moth, SHB larvae have 2 rows of short spines on their backs, two of which protrude at the rear of the larva. SHB don't produce silk webbing when feeding as wax moth do. Wax moth larvae grow to 25mm in length, whereas SHB larvae are about half that length.

No requirement to notify of the presence of SHB

Small hive beetle is no longer a notifiable pest under the Livestock Disease Control Regulations 2017 and there is no requirement for beekeepers to notify an apiary officer if you find small hive beetle in your beehive.