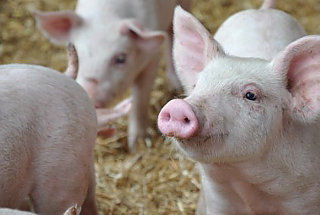 African swine fever, (ASF) is a contagious viral disease of pigs, with the potential to spread through pig populations and cause significant mortalities. In Australia this includes all breeds of domestic, feral and pet pigs.

Australia is free from ASF. If introduced, the disease would have devastating impacts on pig health and production and contribute to wider economic losses.

There are no treatments or vaccines available for use against the ASF virus.

The ASF virus does not affect people and pork products are safe for human consumption.

ASF is different to swine influenza or “swine flu”.

The ASF virus is able to survive long periods in pork and pork meat products, including cured meats, hams, sausages, salamis and frozen pork products. All meat products imported into Australia must be declared.

Swill feeding is banned in Australia. This means pigs must not be fed food scraps that contain meat or have been in contact with meat and they must not be fed any imported dairy products (unless imported legally as livestock feed).

Pig owners are encouraged to report any illness in their animals. Early detection and notification of ASF is the key to preventing uncontrolled spread of the disease should it enter Australia.

Regardless if you’re a pig farmer or pig owner, international traveller, hunter or someone who works in associated industries, everyone has a role in keeping Australia free from ASF and to protect the health and welfare of our pigs, our livestock industry and our communities.

ASF has been present in  sub-Saharan Africa since the 1920s. Since 2007 it has been spreading in domestic and feral pig populations in other parts of the world. The disease is still present in over 60 countries including Western and Eastern Europe, including Russia,  Ukraine, Greece, Germany, Latvia, Slovakia and Serbia, in Asia, since 2018 including China, Vietnam, Cambodia, India, North and South Korea, Indonesia and Philippines and in the Caribbean since 2021.

It has also been detected in our near neighbours Papua New Guinea and Timor-Leste.

For a current situation report, refer to the World Organisation of Animal Health (OIE).

Meat or other products from pigs do NOT pose any food safety risk for humans.

ASF has a complex epidemiology and can affect domestic and feral pigs of all ages, with clinical signs including fever, ‘blotching’ of the skin, incoordination, bloody diarrhoea and pneumonia.

Mortality rates are often very high. The gross lesions of ASF are highly variable and affected by the virulence of the strain and the clinical progression and presentation of the disease. There are no treatments or vaccines available.

Pigs usually become infected through direct contact with infected pigs, or indirectly through vehicles, equipment or clothing contaminated with faeces, blood and other fluids from infected pigs, or through ingestion of material containing infected pig meat or pig products. Aerosol spread is limited to very short distances i.e. within sheds.

The virus survives for long periods under most environmental conditions and at a wide range of pH levels. It is not inactivated by freezing or thawing and is resistant to several of the most commercially available disinfectants. Biting flies and ticks, can also aid spread to susceptible animals.

+ Expand all- Collapse all Swill feeding is banned in Australia because it poses a significant risk of spreading diseases such as ASF.

Meat or meat products cannot be fed to pigs. This includes food scraps that have been in contact with meat, such as on the same plate.

Imported dairy products are also not permitted to be fed to pigs.

Find out more about swill and prohibited feeding.

The best defence against disease is to implement effective biosecurity practices for your property. Document these practices in a Pig Biosecurity Management Plan that is implemented and regularly reviewed.

Good biosecurity practices reduce the risk of disease entering your property, spreading throughout your herd and moving to other farms.

All visitors to your property, including stock transporters, feed deliveries, vets, technicians and employees need to be aware of, and comply with, your biosecurity arrangements.

A Property Identification Code (PIC) is legally required by all pig owners, even if you only have one animal. These codes are free to obtain and are allocated by Agriculture Victoria.

PICs are an important tool to support traceability systems and disease control programs. Agriculture Victoria use PICs during disease outbreaks or other emergency events such as fires and floods to contact owners of livestock so they are informed, and assistance can be provided.

Traceability systems also provide confidence to consumers in domestic and overseas markets that the products they buy are of good quality.

Pigs must be identified by a registered pig tattoo brand or ear tag (depending on the size of the pig) when moved to another property, saleyard, scales or abattoir.

Find out more about NLIS for pigs.

PigPass is a national tracing system for the movement of pigs within Australia. This information is critical during disease outbreaks to trace animal movements, to assist in identifying potential sources of disease, and to prevent further disease spread.

PigPass National Vendor Declarations (PigPass NVD) must be completed when you move pigs from your property. This applies to all pig owners, regardless of the number of pigs you own.

Find out more about PigPass at Australian Pork Limited (APL).

If you suspect an exotic or emergency animal disease, immediately contact your private veterinarian, animal health staff at your local Agriculture Victoria office or call the all-hours Emergency Animal Disease Hotline on 1800 675 888.

Find out more about notifiable diseases.

Contact your local District Veterinary Officer at Agriculture Victoria or your private veterinarian for eligibility criteria and approvals.

Find out more about the Significant Disease Investigation program.

Veterinarians who examine unwell pigs and suspect ASF (or any other emergency disease) should contact Agriculture Victoria immediately using the EAD Hotline on 1800 675 888, via the Notify Now app or by contacting their local District Veterinary Officer. Collect samples from at least 5 but up to 10 affected pigs.

Collect duplicate samples to allow for laboratory testing for endemic diseases once exotic diseases are excluded. If ASF is suspected, do not leave the property until you have spoken with an Agriculture Victoria officer.

Veterinarians must maintain high levels of biosecurity when investigating suspect cases. Decontamination of equipment and vehicles, PPE and biosecure collection and transport of samples must be performed to prevent the spread of disease.

Find out more about notifiable diseases.

The Victorian Significant Disease Investigation (SDI) Program aims to boost Victoria's capacity for the early detection of diseases in livestock and wildlife by increasing the participation of veterinary practitioners and subsidising the cost of investigating significant diseases.

For further information on the eligibility criteria, subsidies and approvals process contact your local District Veterinary Officer at Agriculture Victoria or refer to the Significant Disease Investigation program page.

Find out more at VetSource.

International travellers could unknowingly bring virus back from an ASF-affected country, especially if they have visited farms, markets, rural areas or places where pigs have roamed.

Some food and souvenir items may carry diseases which threaten our agricultural industries and the health of our livestock. It is important to understand what you can legally bring into Australia.

Before you bring or mail goods to Australia for your use or the use of family and friends check that it is allowed into Australia.

For more information, visit Bringing or mailing goods to Australia.

Also tell your overseas family and friends to do this before visiting you in Australia or sending you parcels.

Before returning home to or visiting Australia, always thoroughly wash clothing and clean and disinfect footwear. Dirt or other organic matter can easily harbour exotic pests and diseases.

If you have possibly had contact with pigs or places where pigs have been during your time overseas it is recommended to avoid any farms, properties, markets, petting zoos or other locations where pigs may be located for at least 5 days after you return to Australia.

The spread of ASF in parts of Europe have been associated with the movements of feral pigs or wild boars.

Hunters are encouraged to report any feral pigs that appear unwell or are found dead using the Emergency Animal Disease Hotline on 1800 675 888 or via the Notify Now smart phone app.

Surveillance in feral pigs is very difficult due to their isolated populations so hunters play an important role in detecting and notifying suspicion of disease quickly.

For more information, see our factsheet:

Food waste containing meat or other animal by-products must not be fed to pigs as it may contain viruses that cause diseases in animals, such as African swine fever and foot-and-mouth disease. These viruses are not destroyed by chilling, freezing or curing, and may not be destroyed by cooking.

Prohibited food waste should be placed in an appropriate garbage bin for collection by the council or commercial waste service for disposal in landfill or composting at an appropriate recycling facility.

What happens if African swine fever is detected in Australia?

An outbreak of African swine fever (ASF) in Australia would trigger a series of national arrangements to coordinate a response between government and industry in all states and territories.

In Victoria this would be led by Agriculture Victoria through the implementation of a disease response plan. This plan is guided by the national response strategy for African swine fever, called Ausvetplan.

Find out more about Ausvetplan.

The response to an incursion of ASF is influenced by how early the outbreak is detected, the extent of spread of the disease, the location of affected properties, virus virulence factors and whether feral pigs are involved.

The default policy is to control and eradicate ASF in the shortest possible time using a combination of strategies including:

Further information is available at:

Factsheets in Mandarin, Vietnamese and English