Chestnut blight is a declared exotic plant disease of chestnut and oak trees that is present in Victoria. It is caused by a fungus (Cryphonectria parasitica) that grows underneath the bark, resulting in cankers that slowly develop and surround the infected trunk, stem or branch. Once a tree is infected with chestnut blight, it will eventually die.

Chestnut blight symptoms can be difficult to detect. Infected trees are likely to have some or all of the following symptoms. 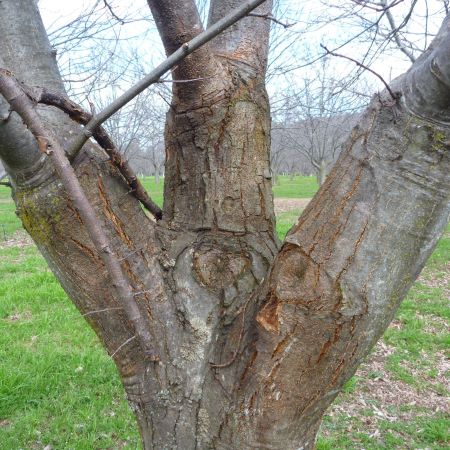 Note: orange stoma do not have to be visible for a tree to be infected with chestnut blight. Cankers cause leaves to wilt and die, ultimately killing branches. The leaves generally stay attached to the dead branch, resulting in a distinctive ‘flag’ of yellow-brown leaves in contrast with healthy green leaves.

Where is chestnut blight found?

The disease was first detected in north-east Victoria in 2010. Despite extensive eradication efforts, chestnut blight is still present in Victoria.

The chestnut blight emergency response has transitioned to an effective and sustainable long-term management program with industry leadership, supported by Agriculture Victoria and the community.

Chestnut blight is spread through direct contact with the fungus inside an infected plant (via pruning) or by spores released into the environment from orange stroma formed on infected material. The fungus and spores can be spread by:

Chestnut blight spores can remain viable on clothing and equipment for several days and be produced in dead wood for at least a year.

Chestnut blight poses a significant risk to Australia’s chestnut industry, approximately 70 per cent of which is produced in Victoria. Once present, the disease can remain dormant for many years before symptoms become visible, making it very difficult to detect and eradicate.

All chestnut growers are asked to remain vigilant and survey their chestnut and oak trees every three months for signs of this devastating disease, and to report suspected detections.

If you suspect that you have found chestnut blight, report it immediately to the Industry Biosecurity Officer (Chestnuts Australia Inc) at ibo@chestnutsaustralia.com.au

Do not collect samples of suspected chestnut blight. Avoid contact with any trees showing symptoms, as handling could spread the disease.

In Victoria, the landholder is responsible for managing chestnut blight on their property.

Chestnut blight can be difficult to detect because it can grow for years in trees without showing obvious symptoms. Follow these steps to look for and manage chestnut blight on your property:

Throughout this process, ensure to decontaminate clothing, equipment and machinery to prevent further spread of chestnut blight.

Agriculture Victoria and Chestnuts Australia Incorporated have developed the following resources to help you check your trees for chestnut blight and manage infected trees:

For a printed version of the 'Guide to managing chestnut blight', contact Chestnuts Australia Inc at ibo@chestnutsaustralia.com.au

Landholders are encouraged to report and manage chestnut blight for their own benefit, resulting in no additional property quarantine being imposed. Agriculture Victoria will on request and at cost, perform diagnostic testing at Crop Health Services (the approved provider of diagnostics services to Agriculture Victoria).

History of chestnut blight in Victoria

Chestnut blight disease was first detected in the Ovens Valley in Victoria’s north-east in September 2010. Since this time, Agriculture Victoria has worked with affected growers and the national chestnut industry to eradicate the disease. Over 740,000 trees were inspected and over 5,000 diseased and at-risk chestnut trees have been removed.

Three new detections in 2017 triggered a review of the national chestnut blight response. Further surveillance conducted in 2018 and 2019 indicated that there were low levels of chestnut blight still present.

In October 2019, the National Management Group determined that chestnut blight was no longer feasible to eradicate from Australia because it can remain dormant for many years before symptoms become visible, making it very difficult to detect and eradicate. This shifted the response into a Transition to Management program.