Drip irrigation has become the standard irrigation system adopted for irrigated horticulture in the Mallee.  Most irrigators are generally operating at a high level of efficiency.

Recent observations have highlighted that drip irrigators can achieve even greater efficiencies by addressing system drainage (often referred to as ‘drain-out’).

Reducing the level of system drainage will result in a more even water application, a reduction in localised rootzone waterlogging and crop productivity loss.

System drainage occurs following each irrigation event when the remaining water in submains and laterals continues to run inside the pipework to the lowest point(s) in the orchard or vineyard and is emitted.  Studies have found that emitters in these low areas can emit water continuously between 60-minute irrigation pulses, and for as long as 24 hours following complete irrigation shutdown.

While drainout is not a new problem, for large systems with long laterals and large submains, system drainage can generate a significant volume of water.  This is particularly the case when irrigation is applied frequently, and especially if pulse irrigation is practiced.  The more frequent the irrigation event, the more frequent drainout occurs following each system shutdown/turnoff.

Pulsing is the practice of applying water in short durations with intervals in between (say one hour on, one hour off) over an irrigation event.  The most commonly claimed benefit is that it encourages greater lateral water movement.

Following each irrigation event, system drainage will continue to take place through gravity to the lowest points in the valve.  Likewise following each pulse event drainout will continue to occur.  This can result in an excessive amount of water accumulating in these areas, impacting tree health and orchard access.

As a result of drainout many irrigators are reducing or eliminating their use of pulsing and running longer irrigation shifts.

It is generally recognised by almond producers that low points in orchards suffering from excessive water and nutrient application are prone to diseases such as hull-rot, and nut retention after harvest.  Recent research has shown how these wet areas can become focal points for the accumulation of mummified nuts and subsequent build-up of carpophilus beetle populations that lead to higher levels of crop damage.  This provides further incentive to reduce drip irrigation system drainage.

There are several options available to minimise the level of drainage generated from drip irrigation systems.  The most appropriate option will be site specific based on existing system hydraulics, run lengths, static head and personal preferences.  General recommendations are not appropriate and precise professional advice is necessary.  Options will differ between patches on the same property, and combinations of these should also be considered.  Potential options are described briefly below;

Drip irrigation systems have conventionally been designed to run laterals (and submains where possible) downhill.  This itself is a major cause of system drainage.  Some options exist to minimise or divide existing areas experiencing drainout without the need for a significant system re-design.  In all situations consultation with an irrigation designer is required.  In many cases system drainage cannot be completely eliminated but can be minimised or redistributed from an existing zone of concentration.

Most dripline manufacturers now produce a dripline type which can retain water within the pipe up to a maximum pressure (typically 1.5 – 2.5 m).  When pressure in the laterals drop (following valve shut-off at the end of an irrigation cycle) and the desired pressure is achieved, a mechanism in the dripper stops it from continuing to emit.  This results in the pipe remaining full.  If the static head of the patch is favourable, this option may be considered to reduce dripline drainage.  Dripline products having this function are usually designated CNL (compensating non-leakage) or ND (non-drain). 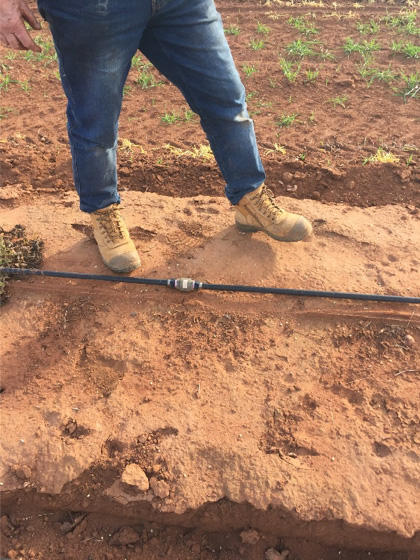 Most system drainage is generated from submains, with this water moving into dripline laterals and then emitting in low points.  Dripline non leakage valves can be installed at the beginning of drip laterals to prevent draining of the submain into low lying areas after system shutoff.  In addition, dripline non leakage valves can be installed part way down the slope to prevent all the water in the dripline draining to the low point in the valve area.  Advice from irrigation suppliers is highly recommended to ensure correct installation and location of these valves.

A simple but possibly more expensive option is to install sustaining valves on submains downhill of existing valves at intervals based on static head (usually 2 – 3 m) in order to reduce the volume of drainage at the end of the submain (and associated laterals).  This option spreads the drainage onto soil types further up the slope which may better accommodate excessive water application.

A low-cost option is to install a non-return valve on submains uphill of valves at intervals based on static head (usually 2 – 3 m) in order to reduce the volume of drainage at the start of the submain (and associated laterals).  This option also spreads the drainage into different locations.

Removal of flush submains located on high areas to reduce system drainage back through the laterals to low lying areas is an option worth considering.  The flush submains would be replaced by lateral hose valves. Shortening flushing submains may also be an option in certain situations.

Positioning valves at the bottom of slopes in new designs allows system drainage to be controlled by running appropriately designed submains uphill.  The addition of check valves at specific static intervals (1.5–2 m) upslope from the valve will reduce drainage back to the valve and associated laterals.

Valve positioning in the middle of submains to reduce the need for large diameter submains should also be considered.  For instance, 50 meters of 150 mm submain holds 1,005 L of water, 100 mm 475 L of water, whereas 80 mm holds 264 L.  These reductions of drainage volume are significant.

The clustering of valves and backup filters can require an increase in the usage of larger submain piping.  Although valve clustering simplifies automation and reduces stops when cleaning backup filters, it should not be used if system drainage problems will be created.  However, if the blank submain runs uphill, the submain won’t drain when the valve turns off, therefore drainage to the area will not have been increased.

This option shortens lateral run lengths and therefore the volume of lateral drainage created, particularly when combined with smaller diameter laterals.  This option also provides the opportunity to select valve areas that better match soil types in a dune-swale situation

Given the level of system drainage that has been observed, managers are now modifying their irrigation pulsing generally by increasing run times and reducing the number of pulses applied.  Some are questioning their need to pulse altogether.

Water remaining in the system can result in greater levels of silt and organic matter build-up within submain piping.  Greater attention to flushing and injection of biocides (chlorine or hydrogen peroxide) may be necessary.  However, like all drip irrigation systems, periodic biocide treatment and regular flushing is highly recommended and system improvements to reduce drainage into low lying areas of the property is not a major concern if these system hygiene measures are adopted.

Some believe if water is retained in a CNL dripline this may attract root growth, particularly if trees become stressed such as during harvest and are looking for sources of water.  This could be an issue for sub surface drip irrigation or areas where the dripline has become submerged due to windblown soil.  It is important that unless an irrigation system is designed and managed as a subsurface irrigation system, the dripline should not be allowed to be buried for extended periods. Periodic manual lifting of dripline out of drift and organic matter is necessary.

In some situations, it may be necessary to manually remove the retained water in pipe at the end of the season prior to freezing temperatures over winter, to avoid pipe damage.

Manual drainage may also be required to avoid emitter damage due to long term contact with certain injected chemicals which may be retained in non-drain dripline.

After initial pistachio developments irrigated with low-level sprinkler, we looked to develop our first patch of drip in 2006 and wanted to pulse irrigate.  We were concerned about system drainage.  At the time the existing irrigation designer did not believe that system drainage could be eliminated.  Some modifications were agreed to, resulting in a system we are reasonable happy with.  Although a few wet spots are present, after 14 years no issues exist. Since 2006 additional irrigation developments have occurred.  With experience we are now comfortable in producing irrigation systems where system drainage is kept to an absolute minimum.  Options we have adopted include:

Don’t simply accept an irrigation design.  Go through the design valve by valve to find the best option.  This will usually result in greater capital outlay initially but a much better end result.

Troy Richman is Almas Almonds General Manager, and oversees approximately 1,200 Ha of almonds in both north-west Victoria and south-west NSW.

Almas Almonds retrofitted approximately 730ha of drip irrigated almond orchard in 2017 – 18, creating a low drainage system.  This became necessary when tree deaths were occurring due to rising watertables in the low points of the landscape.  Using a bucket test over 24 hours emitters were found to be applying water up to four times as much as intended.  This translated into approximately 10 litres of water discharging from 2.3 L/hr drippers when a one-hour pulse was applied.  Testwell monitoring confirmed the presence of watertables.

Bucket testing during and after system shutdown identified a very uneven application of water, and in turn nutrition, with crop biennial bearing compounding the problem.

Over 400 Ha has since been developed with dripline drainage in mind, resulting in systems which have significantly minimised, but not eliminated drainage.  Options incorporated include: