Armillaria root rot, also known as the honey toadstool or bootlace fungus, is a widespread and often destructive disease that can affect an extremely wide range of plants.

Overseas, the disease is reported to be caused by Armillaria mellea. But in Australia a related indigenous fungus Armillaria luteobubalina is the most common cause of Armillaria root rot.

Above-ground symptoms on infected plants are: 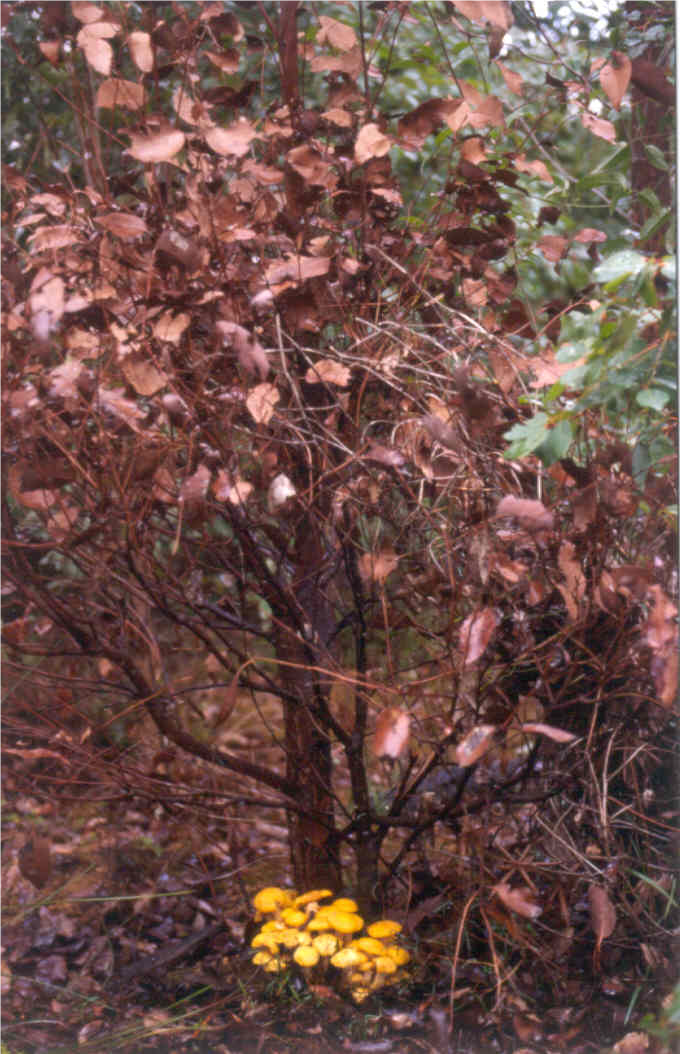 The most distinctive symptoms, found only on closer examination of affected trees, are:

Occasionally, after an infected tree has died, honey-coloured clusters of toadstools grow from the base of the tree (Figure 2). These usually appear from May to July. The toadstools (the fruiting bodies of the fungus) have honey-coloured to deep brown caps covered with scales, whitish gills and yellow to brown stems with a pronounced ring or collar around the upper part of the stem (Figure 5). 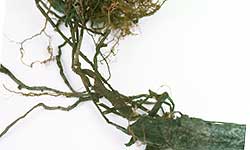 When compared with other more common orchard diseases, Armillaria root rot is only of minor importance. In an affected orchard this disease can be destructive, and effective control is very difficult. 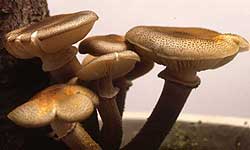 A. luteobubalina is a widespread and endemic pathogen of native forests. It generally kills trees weakened by:

In healthy, undisturbed environments it's generally not a problem.

Because Armillaria can live saprophytically on dead stumps, it's often a problem in newly cleared areas where crops or gardens are planted. But grasses (Gramineae) and some herbaceous ornamental and vegetable plants can be successfully planted on infected sites.

The fungus can spread in several ways, but usually spread is from a woody food base such as an infected tree or stump, or a small piece of infected root.

Most spread is by root contact: the fungus grows from a diseased root into a healthy root via the point of contact of the roots. Rhizomorphs can grow from infected roots through the soil to roots of a nearby plant.

Airborne spores produced by the toadstools can be another method of spread, although these spores can only infect dead or injured wood.

The main sources of infection in orchards are:

The disease often spreads radially from one tree to surrounding trees, and replants within the affected area usually die within a few years unless the site is treated (Figure 6). 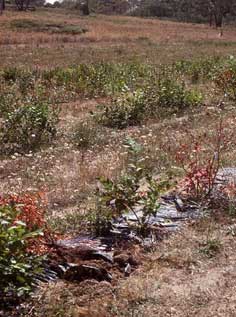 Control of Armillaria root rot is difficult. Methods that have been tested include:

The following recommendations give a practical approach to Armillaria control in orchard situations.

When clearing and planting new ground

Armillaria can be controlled by soil fumigation, but control depends on the complete eradication of the fungus. To achieve this, the extent of infestation must be determined accurately and the entire infested area must be fumigated after suitable preparation of the soil.