The fungi that cause brown rot of stone fruits in Victoria are:

A third species of Monilinia, M. fructigena, affects pome and stone fruit in Europe and Asia, but has not been recorded in Australia. 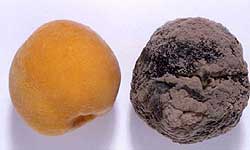 Brown rot can cause serious losses to stone fruit, especially in seasons with very wet weather during flowering or immediately pre-harvest.

Losses are mainly associated with blossom blight (which reduces fruit set and potential yield), and brown rot on maturing fruit close to harvest. Significant losses can also occur to fruit after harvest (Figure 4).

The disease is widespread throughout Victoria. In the past, major losses occurred throughout the extensive stone fruit production areas in eastern Australia, but such losses have been generally rare in recent years. This is largely due to improved management practices and more effective fungicides. The disease-causing fungi are carried over from season to season on:

Fruit and wood that fall and remain on the ground are also significant sources of infection. Blossom blight occurs to a greater or lesser extent in most years, and infected blossoms continue to produce spores up to and throughout the harvest period.

Injuries caused by insect pests, hail or fruit-splitting allow the establishment of infections and subsequent formation of spores.

Fruits that fall to the ground in the pre-harvest period and during harvest are readily infected with brown rot and are significant in starting of severe outbreaks.