Verticillium wilt, also known as blackheart, is caused by the fungus Verticillium dahliae. The disease is found worldwide but is more serious in temperate areas.

Verticillium wilt affects over 300 species, including both woody and herbaceous plants.

The disease can affect the following fruit trees:

Infections of apple and pear trees are rare.

The disease is usually observed in early summer as a progressive loss of leaves from infected limbs, starting at the base of each branch (Figure 1). Leaves may become yellow and dull in appearance before dropping prematurely. By late summer, only a tuft of leaves may remain at the tip of a severely affected branch (Figure 2). 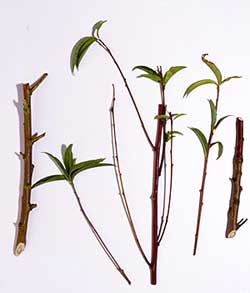 Occasionally leaves may show a true wilt, and when the death of these leaves is very rapid they may remain attached to the plant for several weeks. An entire tree can show these symptoms, or infection may be confined to one side, or even one branch, of the tree.

The most important diagnostic symptom of this disease is found when the trunk, branches or twigs are cut open to reveal the internal wood (Figure 3). Diseased wood shows in the cross section as a series of light to dark brown, irregularly shaped spots that sometimes merge into a ring of stained tissue. In mild cases of infection, wood staining may occur in the absence of any leaf symptoms. The disease is serious for commercial growers because, though affected trees rarely die quickly, they may remain stunted and unproductive for many years. There is also a strong probability that replacement trees will be attacked in later seasons.

The fungus is widespread and particularly prevalent on land that has been repeatedly cropped with susceptible crops (alternative hosts for the fungus) such as:

The fungus survives in the soil for many years as resting-bodies (micro-sclerotia) and as a root-parasite of many crop plants and weeds. Mycelium enters a healthy plant by penetrating the root hairs, or through any wound. The fungus then grows into the water-conducting wood, in which it forms spores.

These spores are carried upwards, with the flow of water, to the stem and leaves, giving rise to a continuous strand of infected wood from the invaded root to the branches and leaves vertically above it.

Verticillium wilt is difficult to control because the source of infection occurs in the soil and the fungus spreads internally throughout the tree. No method is available for treating infected orchard trees.

To prevent Verticillium from attacking fruit trees, try to reduce the amount of fungus in the soil. You can do this in the following ways: