The occurrence of common blight in Victoria is sporadic and it's now considered of moderate importance. When it occurs it's very destructive and can cause major losses.

The disease can affect: 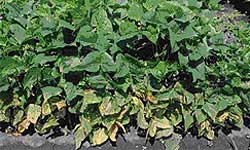 Bacteria enter plants through wounds, such as those caused insects, machinery or climate, or through natural openings. It takes 10 to 14 days from initial infection for new bacteria to be released.

Contaminated seed is the major means of dispersal of the bacterium.

It's also spread by:

It can be transported:

The bacterium can survive either inside the seed or on the seed surface. Tolerant varieties can harbour the bacterium.

It overwinters on infected plant debris, especially on residues near the soil surface.

The bacterium can also survive on the surface of volunteer beans and weeds without them showing any symptoms.