Common scab of potatoes is a soil-borne disease caused by the bacteria-like organism Streptomyces scabies.

A severe infection can:

The scab organism varies greatly, so there are different symptoms and a range of conditions under which the potato can be damaged. 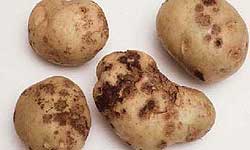 Tubers affected by common scab can show either shallow or deep scabs, or a combination of both.

A shallow or surface scab is a superficial, roughened or russeted area on the tuber. Slight protuberances with depressed centres might form and are covered with a small amount of corky tissue.

A deep or pitted scab consists of lesions (areas of diseased tissue) that can be:

Soil pH and soil moisture seem to be the most important factors affecting seasonal incidence and regional distribution of scab, but there are other factors that are not clearly understood.

Common scab can be particularly severe when potatoes are grown in neutral or alkaline soils (pH 7.0 and above). Some races of the organism can damage tubers at a pH of 5.0 or below, but it's generally accepted that the disease is usually controlled satisfactorily if potato soils are kept at pH 5.0 to 5.2. Within the range of pH 5.2 to 8.0, the severity of the disease increases with increasing alkalinity.

Warm and dry soil conditions can noticeably increase the incidence of the disease, particularly during the critical period of susceptibility to scab (2 and 5 weeks after tubers start to form).

For example, controlled irrigation combined with a registered fungicide treatment results in better control than either treatment used on its own.

The only economical means of long-term control is to use resistant varieties in soils where the problem recurs.

While no popular variety is resistant, the early types (Red Pontiac, Kennebec and Sequoia) are more susceptible than the medium- to late-maturing types (Sebago and Coliban).

Long rotations of 3 to 5 years can reduce the severity of the disease.

You will ideally rotate with legumes, and exclude:

Adequate moisture and timing of irrigation

Dry soil at the time when tubers start to form, and for the 5 weeks after that, will increase the chances of common scab occurring.

Irrigate regularly at this time and keep moisture at field capacity.