Grey mould is caused by the fungus Botryotinia fuckeliana (Botrytis cinerea). It is a common and often serious fungal disease of tomato plants (and other plants) in greenhouses and fields.

Once established it's difficult to bring under control and it may be present in greenhouse crops all year round. Severe infection of stems can often kill the plants.

This disease can be a serious problem in post-harvest storage and transport of fruit and vegetables.

A wide range of plants can show symptoms of grey mould, including:

Grey mould can be severe on glasshouse-grown crops such as:

Symptoms of grey mould can also be found on field-grown crops as well.

Grey mould can occur on all above-ground parts of the tomato plant. It often starts at a point of damage or on any decaying tissue. Examples of infection points can include: The most characteristic symptom is a grey furry mould covering the infected area. This mould is a mass of spores of the grey mould fungus. When shaken, clouds of spores are released from these infected areas.

Stem infections can girdle the whole stem and cause wilting of the plants above the infected area.

Leaf symptoms may appear as a V-shaped dead lesion at the tip of the leaf.

Fruit symptoms can appear as masses of grey furry mould covering parts of the fruit, sepals and peduncles.

Another symptom of grey mould is the production of halo or ghost rings on tomato fruit. These are caused by partial infections that stop developing before the fruit is rotted. 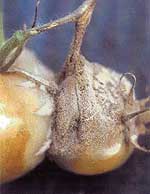 The source of contamination to a new crop is from spores:

Grey mould infections develop and produce spores under humid conditions. These conditions will also stress the plants, making them susceptible to disease.

Four to six hours of free water on the plant surface is required for spores to germinate and infect the plant. In greenhouses, this usually happens through condensation, which occurs when the plant surfaces are colder than the surrounding air.

The chance of condensation forming increases with high humidity of the air and when the air temperature decreases quickly.

Condensation can also form on the interior surfaces of the greenhouse and drip onto the plants.

Survival of the fungus

In the glasshouse the grey mould causing fungus survives on:

It potentially can also survive in organic growing medium.

You can prevent and control grey mould in your greenhouse by combining environmental controls with occasional chemical use. Focus on making sure your greenhouse has good:

Don't rely on chemicals as the only control method. Without proper environmental controls, the grey mould will continue to develop and spread.

The fungus prefers temperatures in the range of 18°C to 23°C, but its growth is inhibited by temperatures over 32°C.

Good air circulation improves ventilation and reduces the chance of condensation forming. Moving air through the crop helps keep the plant and air temperatures the same.

Chemicals can help reduce the risk of infection along with good ventilation and hygiene. Don't rely on chemicals alone to control grey mould. This is because:

The following tips can help with chemical application:

For spraying to be effective, you must apply the correct amount of product to the crop being treated. Always follow the directions on the product label.

Ensure occupational health and safety for workers when using sprays. Some sprays can cause deterioration of plastic covers.