Tomato spotted wilt virus (TSWV) is common and widespread throughout Australia. It affects around 500 species including: In potatoes, it's particularly important that the seed crops grown for seed tubers are free of TSWV. Otherwise the virus can be passed on to successive crops in the seed tubers.

Symptoms caused by TSWV can vary greatly according to the strain of virus and potato variety. The following symptoms can indicate TSWV. 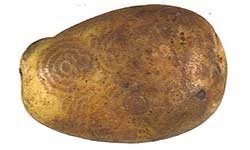 TSWV is spread in potato crops by:

TSWV can be carried from one potato crop to the next through infected seed (tubers). But some potato varieties are much more likely to pass the virus on to the next crop than others. For example:

Organisms that are responsible for spreading a disease are known as vectors of the disease.

Several species of thrips are well-established in Australian potato districts as vectors of TSWV.

In Victoria, TSWV is mainly spread by the:

But the most effective vector of TSWV is the western flower thrips (WFT), Frankliniella occidentalis (Figure 4). WFT has not yet been found to be a problem in Australian potato crops, since potato seems to be a non-preferred host plant.

WFT is particularly resistant to chemical pesticides. Growers must monitor their crops for both TSWV and thrips.

Thrips transmit the disease from infected plants to healthy potato plants in the following ways: The adults tend to be more attracted to plants in flower, since they also feed on pollen.

Populations of thrips tend to increase during spring and summer, when conditions are warm and moisture levels are high. Numbers can build up rapidly. In large populations, the process of thrips feeding can damage the crop regardless of whether they have TSWV.

Detecting thrips by sight is difficult, as they tend to hide in the flowers. You can monitor your crops for thrips by shaking or tapping potato or weed plants (particularly flowers) over a:

In susceptible areas, place sticky traps around the crop to monitor changes in the thrips population.

Viral diseases such as those caused by TSWV cannot be readily cured, but you can take the following measures to keep both the virus and its vectors under control.

Keep in mind that TSWV is most effectively managed by controlling the source of the virus rather than the thrips.

To prevent TSWV at the source:

Some other methods for controlling thrips include: