Target spot (or early blight) is one of the most common diseases attacking leaves and stems of potatoes. It usually spreads during autumn and is welcomed by some growers as a haulm killer. But it can cause losses if outbreaks occur early in the season, or in late maturing crops.

The disease is caused by the fungus Alternaria solani. The same organism attacks tomatoes, capsicums and related plants. 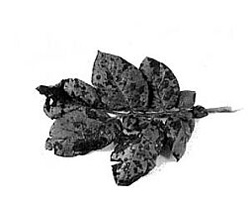 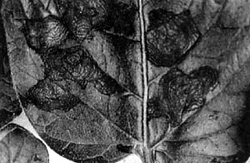 Effective control of target spot involves a combination of measures:

When spores are produced in spring, they're spread by:

Spores fall on potato leaves and remain on the surface until conditions are favourable. They then germinate and penetrate the plant, causing an outbreak of disease.

The disease attacks plants that lack vigour. It often spreads towards the end of the season when the plants have stopped growing.

Target spot often kills the tops of the plants. When defoliation is premature, this means lower yields of tubers.

Survival of the fungus

The fungus causing target spot symptoms is carried over between seasons on plant refuse in the soil. This carryover can lead to widespread infection that generally occurs in crops before harvest.